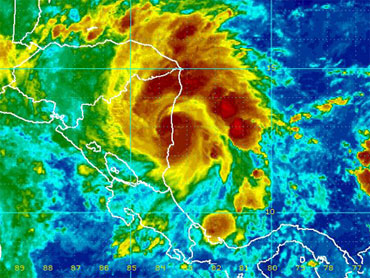 About 80 percent of homes were destroyed in nearby Karawala, a fishing village of about 100 flimsy, wooden shacks near the mouth of the Rio Grande de Matagalpa, said Nicaragua's National Civil Defense director, Mario Perez.

Nicaraguan TV station Canal 63 showed images of corrugated metal roofs and electrical lines flying through the air, and coconut palms bent over by the howling winds.

"There was major damage in the region's infrastructure, such as fallen bridges, damaged schools and government buildings, and electrical transmission towers and telephone service were knocked out," Perez said.

No deaths or injuries have been reported, but Perez said officials are still trying to get information from the region.

The fast-developing grew from a tropical depression into a hurricane within little more than a day, then lost power as it stalled over eastern Nicaragua, with winds slowing to 65 mph (100 kph).

Ida could dump as much as 20 inches (500 millimeters) of rain on the swampy mainland, with the risk of flash floods and mudslides, according to the Miami-based center.

The storm could also raise coastal water levels by as much as 3 feet (nearly 1 meter) above ground level, with dangerous waves.

More than 3,000 people had been evacuated — 800 of those from homes on Corn Island and nearby Little Corn Island, where strong winds damaged about 45 homes, smashed boats, toppled trees and knocked out power. Residents were taken to the port authority building and concrete hotels.

About 2,500 people live on the two islands, which are popular tourist destinations.

Rowena Kandler, owner of the Sunrise Hotel on Corn Island, said many fruit trees on the hotel's 13-acre ranch were damaged.

"We don't have electricity or water," she said. "Everything is on the ground now. Thank God we're alive."

The hotel had two guests who rode out the storm Wednesday night, but Kandler said they left for the airport Thursday morning.

More than 1,000 people were evacuated in Bluefields, and the airport closed.

At the Oasis Hotel and Casino, located half a block from the coast in Bluefields, receptionist Adelis Molina said winds were strong and guests from the United States, Italy and Guatemala were hunkering down inside.

Heavy rains and winds kept officials from evacuating about 80 people on Cayos Perla, but authorities said they planned to used speedboats to get them out.