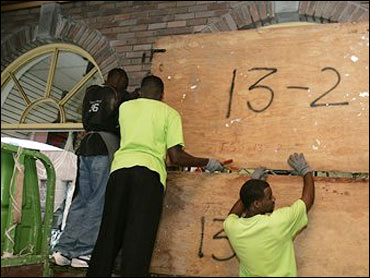 Grenadian police ordered people off the streets and businesses closed as Emily, which strengthened into a hurricane late Wednesday, threatened an island still recovering from the devastation of Hurricane Ivan last year.

A hurricane warning is in effect for Grenada, St. Vincent, the Grenadines and St. Lucia. Tropical storm warnings are in effect for Trinidad and Tobago, Aruba, Bonaire, Curacao and the north coast of Venezuela.

At 11 p.m. Wednesday, the center of Hurricane Emily was about 45 miles southeast of Grenada, according to the National Hurricane Center in Miami. It had sustained winds of about 92 mph and was heading west at about 18 mph.

In Grenada, Prime Minister Keith Mitchell sought to reassure citizens the government would not be caught off-guard - as it was when Ivan killed 39 people and left a wasteland of ruined buildings in September.

Grenadians rushed home under heavy rain, forming traffic jams in the capital of St. George's. Islanders had flocked to the stores Tuesday, snapping up canned food, water and batteries. The rush contrasted with the attitude before Ivan, when islanders took few precautions.

"We took this very, very seriously," said Colin Dowe, an assistant dean at the island's St. George's University, where dozens of students and faculty members waited out the storm. "Ivan was much stronger so the general feeling is that we can get through this."

At least 100 people evacuated to a shelter at a high school in the southeastern part of Grenada, said Angela Pierre, the shelter's manager. Thirty-five other shelters across the country also reported taking people in. The government declared a state of emergency as a precaution.

Commerce halted across the eastern Caribbean as Emily bore down.

BP oil company evacuated nonessential staff from its 14 offshore oil platforms in Trinidad, leaving 11 employees to operate two platforms to fulfill its contractual obligations to provide gas for the country, the company said.

In Grenada, the government ordered people off the streets and opened shelters across the island.

The struggle to recover from Ivan has prevented Grenada from thoroughly preparing for this year's hurricane season. Amid a shortage of construction supplies, many islanders still have no roofs and some children are still taught under tarps. Ivan's destruction left few buildings viable as shelters.

"If the situation gets worse then I'll have to go to the shelter but meantime I'll stick to my prayers," said Winston St. Bernard, 51.

In St. Vincent, people placed boards over window and businesses were supposed to close at noon, though some remained open amid a light drizzle and increasingly dark skies.

"We've got to be prepared and that's what we're doing," said Cordell Roberts, 39, a fisherman who was helping to pull boats from the water in the capital, Kingstown. "People are very conscious about the weather. It's not like the old days when we took it for granted."

St. Lucians also lined up at stores and the government ordered businesses to close in the afternoon. The island's two main airports remained opened, though British Airways canceled its flights from Hewanorra International Airport in the south.

Barbados also shut down its international airport until Thursday morning and ordered a nationwide business shutdown.

Emily trails Hurricane Dennis, which destroyed crops and killed at least 25 people in Haiti and 16 in Cuba last week, according to authorities in the two countries.