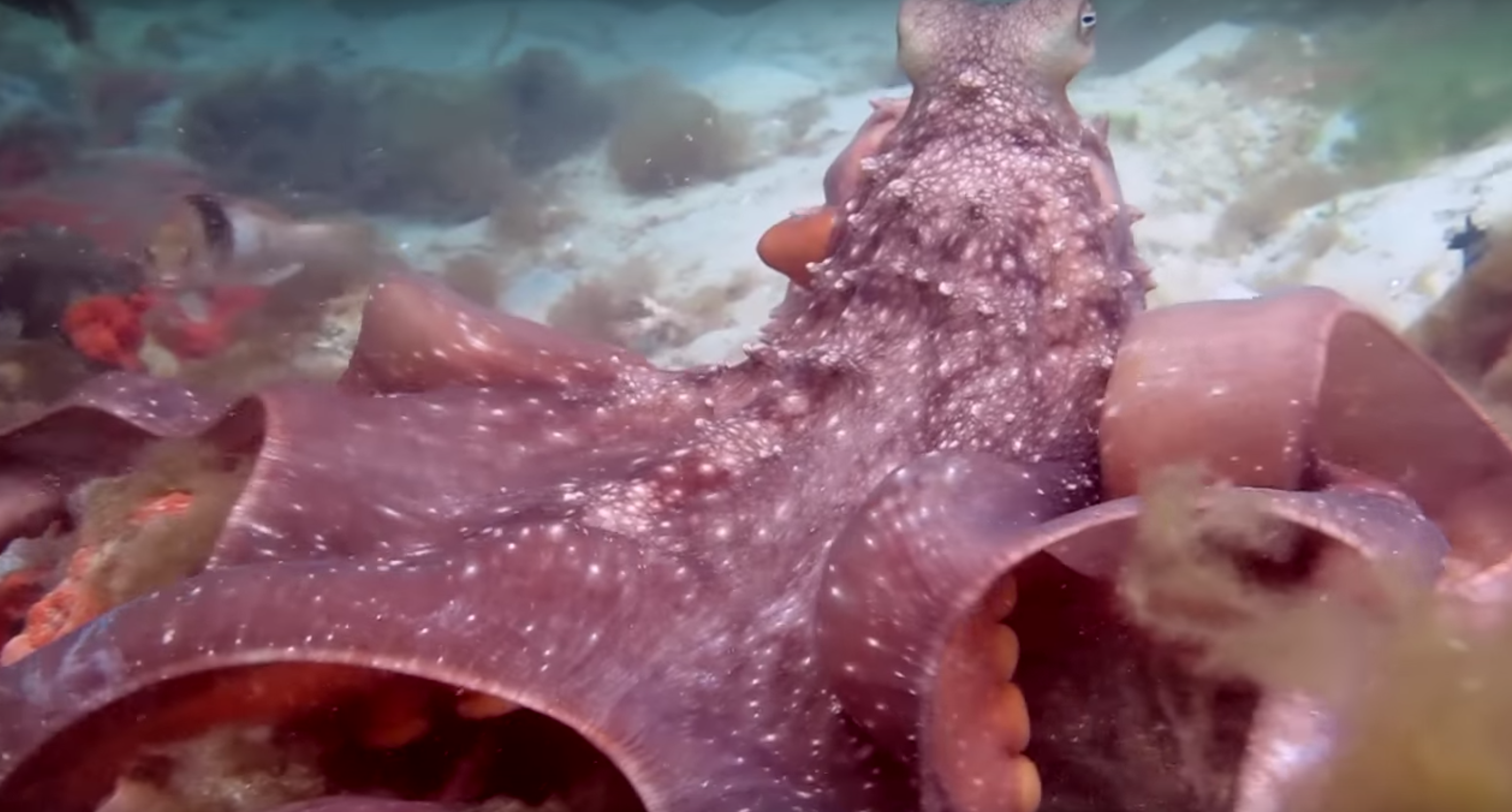 A wild octopus surprised an Australian diver this week by suddenly, and quite dramatically, inflating itself with water, ballooning up like a parachute. Later, when the diver posted a video of the interaction online, she wondered whether the octopus was trying to intimidate her with its grandiose size.

That’s possible, marine biologists said, but they can’t agree on what caused the curious behavior.

One idea is that the octopus was hunting for food, said Kathleen Sullivan Sealey, an associate professor of biology at the University of Miami, who doesn’t know the diver but watched the video online. [8 Crazy Facts About Octopuses]

In the video post, the diver noted how the octopus “blew itself up like a parachute multiple times,” turning its body and eight legs into a giant net as the animal traversed the rocky and coral-filled ocean floor off the coast of Melbourne, Australia.

It makes sense that the octopus was swimming across the ocean floor like a giant parachute, Sullivan Sealey said. Small prey was likely hiding among the coral and rocks along the seafloor. The octopus was likely pushing water downward so it could flush out prey, catch the meal with its net-like body and eat it with its beak, she said.

“It’s shooting water out of its mantle [head],” Sullivan Sealey told Live Science. “It was using that water to chase little shrimp out from the rocks so that they would get caught in its legs and the webbing between its legs.”

“They eat a broad variety of things [for energy], because they have a big brain — they eat mollusks, snails, crabs and small fish,” she said. “They require a lot of protein and food.”

However, another explanation for the animal’s ballooning is more likely, said marine biologists at the Birch Aquarium at Scripps Institution of Oceanography at the University of California, San Diego.

The video shows how the octopus used camouflage to blend its color and body texture with its habitat, the Scripps team said. When the animal sees the diver, the octopus spreads out its arms twice, likely to make itself look larger, the scientists added.

“This behavior is used to say, ‘Look how big I am. You don’t want to eat me,’ to a predator,” said Caitlin Scully, a spokesperson at the aquarium. “Then, the octopus went back to trying to hide and use camouflage, only to eventually swim away.”

The Scripps team added that the octopus is likely a common Sydney octopus (Octopus tetricus), but that it’s difficult to say from just watching the video.

The diver who recorded the video, PT Hirschfield, is a filmmaker and writer who lives in Victoria, Australia. Hirschfield said she has OCD — obsessive-compulsive diving — and dives because of the “serenity and tranquility” it offers her as she lives with terminal cancer, according to a blog, run by the Professional Association of Diving Instructors.

Perhaps the octopus was both hunting for prey and intimidating her at the same time, she said.

“At first, the octopus seemed as surprised to see me as I was to see it,” Hirschfield wrote in an email to Live Science. “Then it just continued to hunt crustaceans while I followed it around for a while. But towards the end of 10 minutes it definitely seemed to ‘want its own space’ and made no apologies for hunting for crabs right next to my body in a way that I’ll admit was a bit intimidating!”

The octopus could have easily swam off in the opposite direction, “but instead decided to send me a strong message by torpedoing directly at me like a bowling ball with tentacles,” she said. “I got the hint and let it go.”

Hirschfield, who calls octopuses “beautiful, intelligent creatures,” posts other videos and photos of her underwater adventures on her website: pinktankscuba.com.