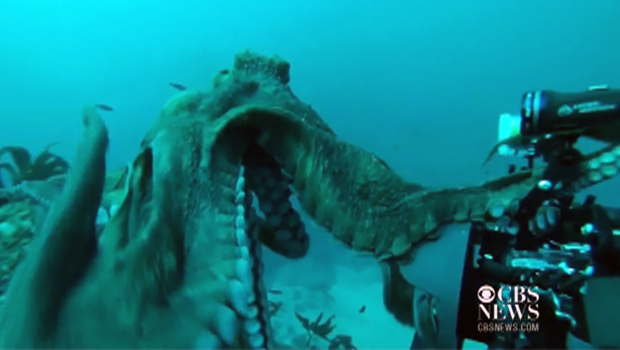 A nosy octopus nearly got away with a scuba diver's camera in an underwater tussle that lasted a few tense minutes, reports CBS affiliate KFMB.

Scuba diver David Malvestuto, and his diving buddy Warren Murray were hoping to spot some underwater life on a dive at Bluefish Cove at Point Lobos State Reserve in Carmel, Calif., so they were excited to come face-to-face with a Pacific octopus.

However, when Murray, a diving photographer, started snapping away – the octopus wrapped his eight arms around the camera and started tugging.

"I was a little worried that the octopus wasn't actually going to come off his camera," said Malvestuto, who recorded the extraordinary interaction on his GoPro. "I just wanted to make sure I had it on video. Otherwise the people on land would never believe us."

Although venomous, the giant creature proved to be peaceful.

"We didn't bother it. We didn't put it in a dangerous situation, so I think it was more or less just curious," David said.

Or perhaps he was simply was not happy with having his photo taken without permission.