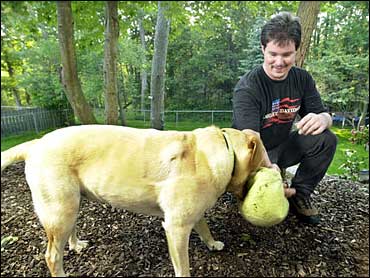 Rob Skrypek let his yellow Labrador out into the back yard. Seconds later, he was in a fight for the dog's life and his own after a bear and her cub scaled his 6-foot fence, lured perhaps by the smell of dirty diapers in the trash.

The black bear pounced on the dog, then thrashed Skrypek.

"I just hit her as hard as I could, like a football tackle," said the 35-year-old father of two, who is still recovering from the May 23 scrape that left him with bite and claw wounds on his back, head and arm. The dog needed stitches.

Across semi-rural northwestern New Jersey, still within commuting distance of New York City, lots of people have a bear story.

As the animals' numbers have grown - now estimated at 1,300 to 3,200 statewide - so have complaints of bears ransacking trash bins, trying to get into houses and killing livestock.

This spring, police, state wildlife officials and a farmer shot and killed four problem bears, including one that swatted a toddler and another that barged into a home, frightening a woman and her daughter.

State officials hope a six-day hunt in December, the first in 33 years, will help reduce the bears' numbers. A state game council is expected to approve the hunt July 8, and up to 10,000 free permits will be offered to hunters who take a state course on shooting bear.

The proposal has divided residents and even families in New Jersey's bear country. Supporters fear that without the hunt, people will be in danger. Critics question the accuracy of the state's bear population count and suggest it is people, not bears, who need to change their ways.

"We're invading their space. The poor guys have nowhere to go," said Ruth Russo of West Milford, who opposes the hunt. Her husband favors it.

Three years ago, a hunt was scuttled at the 11th hour when then-Gov. Christine Todd Whitman intervened. She promoted awareness programs and bear conditioning, such as shooting the animals with rubber buckshot so they would associate trash raiding with pain.

New Jersey's debate has drawn the attention of bear biologists elsewhere around the country, who are watching for both the wildlife and political ramifications.

"There are a number of issues important to bear biologists: the number of bears, the number of complaints and how the diverse opinions of how to manage bears are coming into play," said Rick Eastridge, a biologist for the state of Arkansas.

Throughout the United States, black bears have enjoyed a rebound after hunting and development began to make them scarce during much of the last century.

New Jersey's bear population had fallen below 100 by 1970, when hunting of them ceased.

The animals are protected in a few states, including Louisiana, Texas, Mississippi and Kentucky. But many other states allow bear hunting and use it to manage their bear populations. West Virginia has so many bears that it has more than one hunting season.

Bears can become troublesome when near people and the easy outdoor pickings of unsecured trash, barbecue grills and pet food.

"Bears are a nose with four legs. They're always looking for something to eat," said Paul Davidson of the Black Bear Conservation Committee, a nonprofit organization that works with Louisiana's Department of Wildlife and Fisheries.

Lynda Smith, who leads the Bear Education And Resource Group, or BEAR, a 1,500-member New Jersey organization, said the problem is that people are moving into the bears' territory and do not know how to co-exist with them.

For 10 years, Smith has been giving those residents advice. For example, Smith said high chain-link or stockade fences are useless for keeping the animals out, but making loud noises will scare off foraging bears. She also recommends bear-proof trash cans.

"Nuisance bears are created by people. Bears are very opportunistic, but by nature they don't want to have anything to do with people. The only reason they overcome their fear enough is because there are food attractants," she said.

In West Milford, a town of 26,000 people about an hour from New York City, feeding bears has been illegal for 10 years. Smith complained that the state was slow to follow suit, enacting a law last November.

Smith strongly objects to plans to shoot the bears. "It's a trophy hunt, justified by using nuisance complaints as an excuse," she said.

Bradley M. Campbell, New Jersey's environmental commissioner, defended the hunt as sound wildlife management and said shooting the bears is only one part of the state's approach.

He said the state is working on a bear contraceptive project, continues to promote bear-awareness and bear-conditioning, and is trying to slow suburban sprawl.