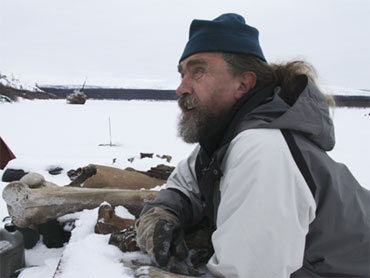 During the last Ice Age, shaggy mammoths, woolly rhinos and bison lumbered across northern Siberia. Then, about 10,000 years ago - in the span of a geological heartbeat, or a few hundred years - the last of them disappeared.

Many scientists believe a dramatic shift in climate drove these giant grazers to extinction.

But two scientists who live year-round in the frigid Siberian plains say that man either for food, fuel or fun - hunted the animals to extinction.

Paleontologists have been squabbling for decades over how these animals met their sudden demise. The most persuasive theories say it was humanity and nature: Dramatically warming temperatures caused a changing habitat and brought a migration of men armed with deep-piercing spears.

No one knows for sure what set off global warming back then - perhaps solar activity or a slight shift in the Earth's orbit. But, in an echo of the global warming debate today, Sergey Zimov, director of the internationally funded Northeast Science Station, and his son Nikita say man was the real agent of change.

For the Siberian grasses to provide nutrition in winter, they needed to be grazed in summer to produce fresh shoots in autumn. The hooves of millions of reindeer, elk and moose as well as the larger beasts also trampled choking moss, while their waste promoted the blossoming of summer meadows.

As the ice retreated at the end of the Pleistocene era - the final millennia of a 1.8 million yearlong epoch - it cleared the way for man's expansion into previously inaccessible lands, like this area bordering the East Siberia Sea.

Northeastern Siberia, today one of the coldest and most formidable spots on the globe, was dry and free of glaciers. The ground grew thick with fine layers of dust and decaying plant life, generating rich pastures during the brief summers.

When humans arrived they hunted not only for food, but for the fat that kept the northern animals insulated against the subzero cold, which the hunters burned for fuel, say the scientists. They may also have killed for prestige or for sport, in the same way buffalo were heedlessly felled in the American Old West, sometimes from the window of passing trains.

The wholesale slaughter allowed the summer fodder to dry up and destroy the winter supply, they say.

"We don't look at animals just as animals. We look at them as a system, with vegetation and the whole ecosystem," said the younger Zimov. "You don't need to kill all the animals to kill an ecosystem."

During the transition from the ice age to the modern climate, global temperatures rose 5 degrees Celsius, or 9 Fahrenheit. But in Siberia's northeast the temperature soared 7 degrees, or nearly 13F, in just three years, the elder Zimov said.

The theory of human overkill is much disputed. Advocates of climate theory say the warm wet weather that accompanied the rapid melting of glaciers spawned birch forests that overwhelmed the habitats of the bulky grass eaters.

Adrian Lister, of the paleontology department of London's Natural History Museum, said humans may have delivered the final blow, but rapid global warming was primarily responsible for the mammoth's extinction. It brought an abrupt change in vegetation that squeezed a dwindling number of mammoths into isolated pockets, where hunters could pick off the last herds, he said.

Mammoths once ranged from Russia and northern China to Europe and most of North America, but their numbers began to shrink about 30,000 years ago. By the time the Pleistocene era ended they remained only in northern Siberia, Lister said.

As in millennia past, Sergey Zimov believes hunting is a problem today.

"I believe it's possible to increase the density of herbivores in our territory 100 times," says Zimov, who keeps a 6-foot-long yellow-brown tusk of an 18-year-old female in a corner of his living room. "I say let's stop the poaching. Let's give freedom for animals."