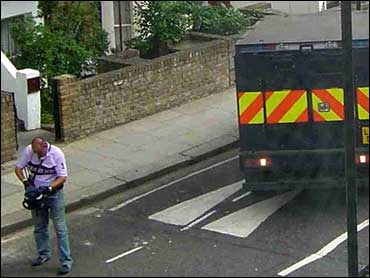 Undercover police shot and killed a man Friday in front of stunned commuters and arrested another Friday while snipers and bomb squads fanned out in a dramatic hunt for the culprits behind London's latest terror attacks.

Jittery commuters at the Stockwell subway station in south London at around 10 a.m., saw police chase a man wearing a padded coat into a subway car, pin him to the ground and shoot him in the head and torso, a witness said.

The shooting occurred one stop away from the Oval subway station in south London where one of four explosions was reported Thursday, exactly two weeks after the July 7 suicide bombings that killed 52 people and the four bombers.

"I've seen these police officers shouting, 'Get down, get down!', and I've seen this guy who appears to have a bomb belt and wires coming out," shooting witness Anthony Larkin told the British Broadcasting Corp.

Another passenger on the train at Stockwell, Mark Whitby, said the man didn't appear to have been carrying anything, but said his coat looked padded.

"He had tripped, was half pushed by three guys pursuing him," Whitby said. "I saw a handgun in one of the guys hands and then I saw them point it at him while he was on the floor.

"I heard shots. I saw them shoot him five times."

Police said in a statement that the man had emerged from a house under observation because it was linked to the investigation. He was followed by surveillance officers to the station, where police said his clothing and behavior added to their suspicions.

A man was arrested later Friday in the Stockwell district. Police said the arrest was in connection with Thursday's attacks.

Police arrested a second man on Friday, at a train station in Birmingham in central England, but later said the man was not facing charges related to Thursday's attacks.

Friday's drama unfolded as police hunted for four men accused of trying to detonate four bombs on Thursday. Police released pictures of the men captured on closed circuit television. Three were seen leaving devices in the subway stations, while one was seen leaving something on the No. 26 bus.

One picture showed a man running through a station in a dark shirt with "New York" printed on the front; another man on the top deck of the bus wore a gray shirt, and two other men were shown at separate subway stations.

Thursday's bombs were partly detonated and contained homemade explosives, police said, adding that the attacks bore a resemblance to the July 7 attacks on three subway trains and a bus. It was not clear if the explosives were the same.

Investigators will be comparing the remains of this week's bombs with the explosive residues found after the earlier attacks, said Alex Standish, editor of Jane's Intelligence Digest.

"If there's a common thread between all of them, then the likelihood is we're dealing with a far wider network of terrorism, possibly with a common mastermind," Standish said. "That may mean there is a third, fourth, fifth cell."

Standish said it was unlikely that the two groups of bombers ever communicated, saying they were likely part of a "molecular" structure in which separate groups take orders from the same leader but are unaware of one another.

Newspapers on Friday morning ran headlines reading "City of Fear," and "Is this how we must live?" as nervous Londoners braved the Underground.

Police fanned out across the city in several operations Friday, including one that drew snipers onto rooftops near a house on Portnall Road in northwest London. Police raided the house.

Witnesses said police screamed a name through a bullhorn then banged on the door. When there was no answer, multiple shots were fired, according to Richard Ireland, a witness. There were no reports of injuries or arrests.

Several groups of plainclothes police were seen armed with machine guns on Friday — an unusual sight in London where most officers, or bobbies, are normally seen with truncheons.

Roth reports London police are calling this the greatest operational challenge they've ever faced. They're calling on the public to be calm, despite a frantic manhunt that's put the transit system in chaos. And moving fast through three neighborhoods Friday, the dragnet dropped a cordon of fear.

Around the city, Muslims gathered for afternoon prayers, voicing renewed concerns about a backlash.

Inayat Bunglawala, spokesman for the Muslim Council of Britain, said he had spoken to nervous Muslims since Friday's shooting at the Stockwell station.

"I have just had one phone call saying `What if I was carrying a rucksack?' he said. "It's vital the police give a statement about what occurred and explain why the man was shot dead."

In east London, police evacuated one of London's largest mosques after a bomb threat.

"Someone phoned our director and said there was a bomb inside," said Muhammad Abdul Bari, chairman of the East London Mosque. The Metropolitan Police lifted the cordon about an hour later. The force said no armed officers were involved, and the incident appeared unrelated to the subway shooting.

CBS News Correspondent Elizabeth Palmer reports that in the town of Aylesbury, someone tried to torch the house where one of the suicide bombers from the July 7 attack, Jermaine Lindsay, lived with his family.

Thames Valley Police said officers went to the unoccupied house in Aylesbury, 40 miles west of London after reports of a smell of gasoline in the street. They confirmed the presence of some kind of fuel.

More than 100 alleged revenge attacks have been reported since the first suicide bombings on July 7.

The statement's authenticity could not immediately be verified.

Investigators have been searching for fingerprints, DNA and other forensic evidence collected from the second attacks on three subway trains and a double-decker bus, which were reminiscent of the suicide bombings only two weeks ago.

Service on several subway lines was suspended because of Friday's incidents. Some stations were still closed from the July 7 attacks.

Authorities said it was too early to determine whether the attacks on Thursday were carried out by the same organization as the July 7 blasts — or whether they were linked to al Qaeda.