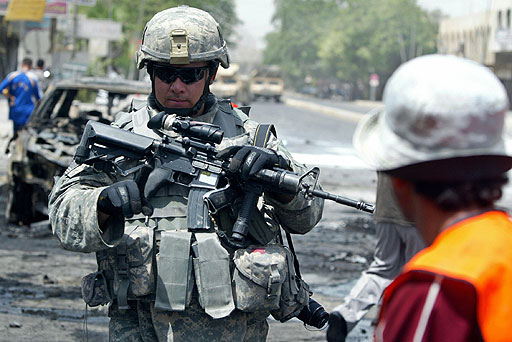 Weeping and applauding fans of soul singer Aaliyah marched alongside a horse-drawn carriage carrying the body of the young artist, who died in a fiery plane crash in the Bahamas.

Wiping tears and cheering "We love you, Aaliyah," her admirers walked several blocks from a Manhattan funeral home to St. Ignatius Loyola Church on Park Avenue, where they joined hundreds more fans crowded behind police barricades.

It took but a few minutes for the funeral procession to make the short distance to historic St. Ignatius Loyola Church on New York's East Side, with hundreds lining the sidewalk, reports CBS News Correspondent Lou Miliano. Her ornate silver casket was carried by a glass-walled horse-drawn hearse, accompanied by three open cars loaded with flowers.

One of the cars pulled up before spectators, and the flowers were distributed to Aaliyah's fans as final remembrances.

Following the service that lasted more than an hour, 22 white doves were released into the sky, one for each year of the singer's life.

She and eight others were killed last Saturday when their twin-engined Cessna propeller plane crashed into swampy scrub and burst into flames shortly after taking off from Marsh Harbour airport in the Bahamas.

Although investigators have not released formal findings, police have said they are trying to determine if overloading or engine failure played a role in the crash. Bahamian police have said the plane may have been overloaded by as much as 700 pounds.

Outside Aaliyah's funeral service, fan India Collins of Manhattan stood in tears, holding a poster reading "Aaliyah, I love you."

"She was a beautiful person, inside and out," said Collins. "I'm shocked and I'm angry. The question that passes through my mind is why."

The 22-year-old R&B star, whose full name was Aaliyah Haughton, was on her way back to the United States after filming a music video.

The up-and-coming sensation sold a million copies of her debut album "Age Ain't Nothing But a Number" in 1994, and more recently the single "Try Again" became a big hit.

Just last month, she released her third album, "Aaliyah," and one of her latest projects was to have been an appearance in a sequel to the cult movie "The Matrix."

Sales of her new album jumped 41 percent last week, according to Soundscan, which tracks record sales.

Aaliyah was born in Brooklyn, New York, ut moved to Detroit when she was 5. She began performing at an early age and by the time she was 11 she was singing in Las Vegas with the legendary Gladys Knight troupe.

In Detroit, Operation Get Down announced it was setting up a memorial fund in Aaliyah's name. She was a graduate of the Detroit High School for the Fine and Performing Arts, and the scholarship fund will allow four students to attend the school, starting in January 2002.

Her uncle, music producer and songwriter Barry Hankerson, a former Detroiter and ex-husband of Gladys Knight, is setting up the fund, while Operation Get Down will manage it.

After her teen-age album success in 1994, Aaliyah embarked on a tour that took her to Europe, Japan and South Africa.

"One in a Million," released in 1996, pioneered a new R&B sound that tended toward computer-generated backing tracks instead of live instrumentation. Her film debut came opposite Chinese martial arts legend Jet Li in the hip and violent "Romeo Must Die."