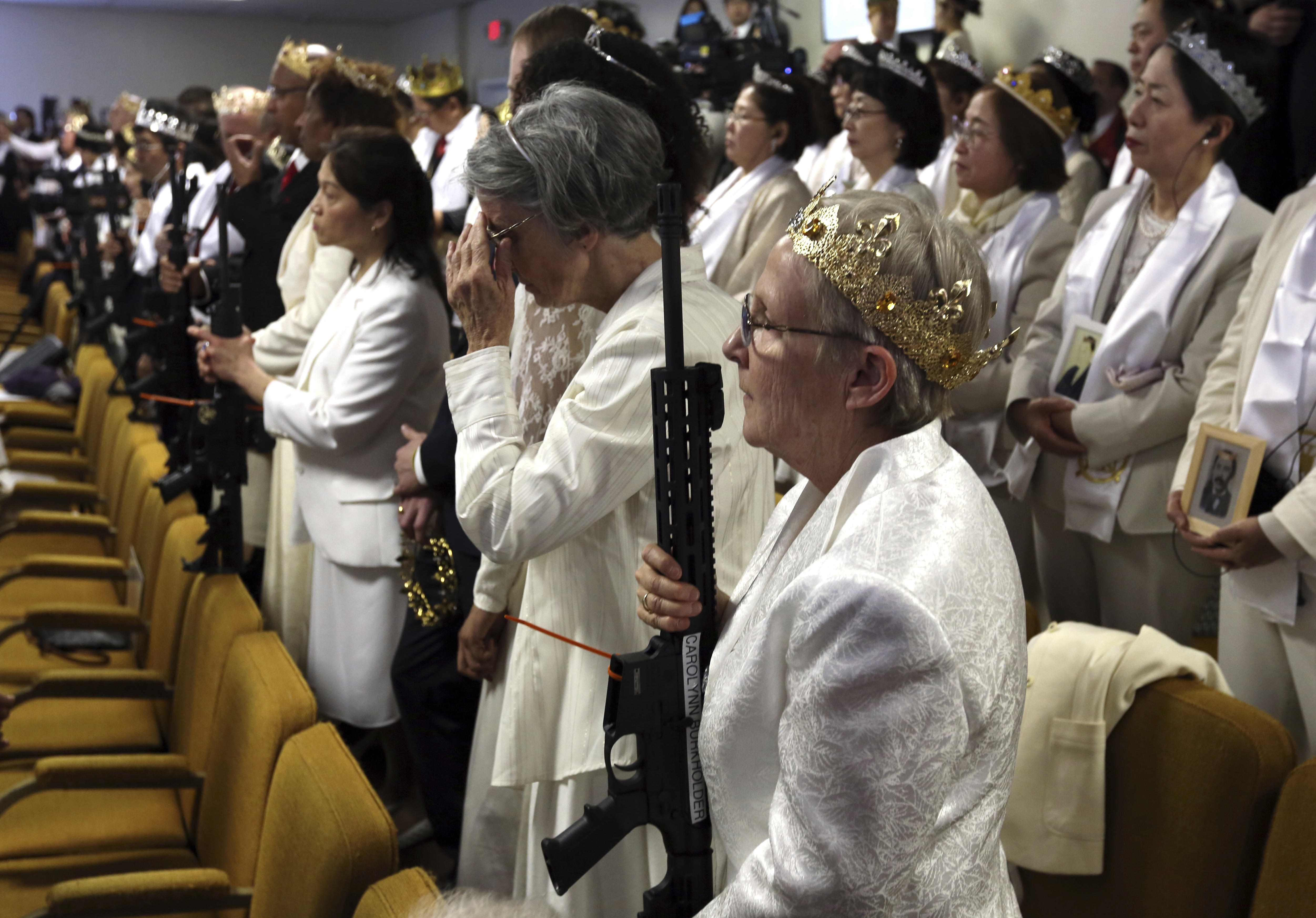 NEWFOUNDLAND, Pa. -- Hundreds of crown-wearing worshipers clutching AR-15 rifles drank holy wine and exchanged or renewed wedding vows in a commitment ceremony at a Pennsylvania church on Wednesday, prompting a nearby school to cancel classes. With state police and a smattering of protesters standing watch outside the church, brides clad in white and grooms in dark suits brought dozens of unloaded AR-15s into World Peace and Unification Sanctuary for a religious event that doubled as an advertisement for the Second Amendment.

World Peace and Unification Sanctuary in Newfoundland believes the AR-15 symbolizes the "rod of iron" in the biblical book of Revelation.

The Rev. Sean Moon, who leads the church, prayed for "a kingdom of peace police and peace militia where the citizens, through the right given to them by almighty God to keep and bear arms, will be able to protect one another and protect human flourishing."

An attendant checked each weapon at the door to make sure it was unloaded and secured with a zip tie, and the elaborate commitment ceremony went off without a hitch.

Tim Elder, Unification Sanctuary's director of world missions, told worshippers the ceremony was meant to be a blessing of couples, not "inanimate objects," calling the AR-15 a "religious accoutrement." The church has held at least one other ceremony featuring assault-style rifles.

But Wednesday's event, coming on the heels of the high school massacre in Parkland, Florida, which killed 17, rubbed emotions raw. Authorities say the shooting suspect, Nikolas Cruz, used an AR-15 in the attack.

"It's scaring people in the community," one protester told a church member. "Are you aware of that?"

The ceremony prompted Wallenpaupack Area School District to move students at an elementary school down the street to other campuses.

Lisa Desiena, from Scranton, protested outside the church with a sign that called the group an "armed religious cult."

She said she owns a gun, but "I don't need a freaking assault weapon to defend myself. Only thing they're good for is killing. Period. That's all that weapon is good for, mass killing. And you want to bless it? Shame on you."

But 41-year-old Sreymom Ouk -- who attended the ceremony with her husband, Sort Ouk, and came with their AR-15 -- said the weapon is useful for defending her family against "sickos and evil psychopaths."