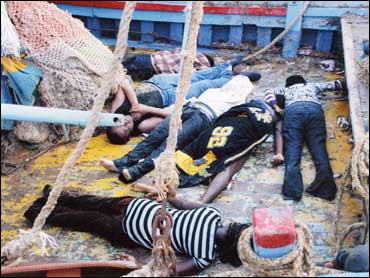 Hundreds were feared dead in the chilly waters of the Mediterranean Sea, days after an overcrowded wooden fishing boat packed with migrants seeking a better life in Europe capsized in stormy waters off the coast of Libya.

A few survivors - who could swim - were rescued, but authorities pulled 21 bodies from the waters and at least 200 more were still missing after the boat capsized Friday. It is believed to be the deadliest migrant ship accident between North Africa and Europe in recent memory, an international migration official said.

Thousands of African, Asian and Middle Eastern migrants fleeing wars and poverty use Libya and other North African countries as launching pads for the dangerous journey across the Mediterranean to southern Europe - often in rickety, overloaded boats. Another flimsy vessel with about 350 migrants was rescued about a day later in the same area where the fishing boat capsized.

While thousands make it safely, hundreds are believed to die in the journey each year. The route between Libya to an island off the coast of southern Italy is one of the most heavily traveled for illegal migrants trying to reach Europe.

The capsized boat, which a Libyan police official said had a capacity of just 50, overturned Friday in high winds with about 250 on board. Six drowned bodies pulled from the water were seen stretched out among piles of nets and frayed ropes on the deck of a fishing boat that took part in the rescue.

"It is hard to imagine that there are survivors among the missing by now," said Laurence Hart, an official based in Libya with the International Organization for Migration.

"The smugglers packed it with hundreds. These are wooden fishing boats, not for sailing," Harous said. The survivors said a hole in the boat may have caused it to sink, he said.

Libyan officials did not release any information on the accident until Tuesday, and by then, it appeared rescue efforts were over.

The second boat packed shoulder-to-shoulder with migrants was rescued safely in the same area about 30 miles from the coast either late Saturday or early Sunday after an Italian merchant ship received a distress call, said Italian port authority spokesman Capt. Cosimo Nicastro.

Many migrants on that boat shown on Libyan state television appeared to be African men, though there were also a few women and children in the group. One man held a baby as he helped a woman struggling to walk.

Hart said many of those rescued from both boats were from Bangladesh and some were Egyptian.

Jean-Philippe Chauzy from the IOM's head office in Geneva said this weekend's incident is believed to be the single largest loss of life of migrants going from North Africa to Europe, though he stressed that information about the migrants' furtive crossings is limited.

"Some of them get to shore, and some are just on the bottom of the sea bed," Hart said. "It's a regular occurrence because this is one of the most used routes for migrants."

Early spring marks the beginning of the smuggling season in the Mediterranean Sea, said Ron Redmond, chief spokesman for the U.N. High Commissioner for Refugees. The sea is generally warmer and calmer during this time of year, though strong storms still occur.

About 36,000 people made it from North Africa to the Italian island of Lampedusa - the closest Italian point from Libya - in 2008, according to figures from the IOM. That was a sharp increase from the 17,000 who arrived in 2007.

While migrants make the treacherous journey to Europe from other North African countries, Libya has increasingly become a destination for migrants desperate to travel north, Hart said.

Besides being physically close to Italy, Libya also has a long, relatively unpopulated and unpatrolled coastline. In recent years, other areas such as the Canary Islands in the Atlantic Ocean, which also draws migrants from Africa, have seen an increase in efforts to stop illegal immigration, pushing people trying to make it to Europe to seek new routes, Hart said.

The Union for the Mediterranean launched in Paris last summer aims at boosting cooperation on both sides of the sea to quell illegal immigration. But several North African states, including Libya, have grown wary of policing Europe's southern shores.

Italy has been pressing Libya to crack down on illegal immigration, including deploying joint Libyan-Italian patrols in the Mediterranean. Rome says many of the illegal African immigrants who arrive in Italy transit through Libya.