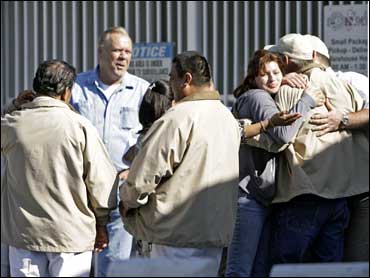 In separate sweeps Wednesday, authorities also arrested dozens of workers at a doughnut factory in Houston and the operators of a chain of Mexican restaurants in upstate New York.

"We knew in advance and cooperated fully," Atkinson said.

Julie Myers, homeland security assistant secretary for ICE, confirmed the company is cooperating, though she said the raids grew out of an investigation that produced arrests last year at the company's plant in Mount Pleasant.

No criminal or civil charges have been filed against Pilgrim's Pride, which has about 55,000 employees and operates dozens of facilities mostly in the South, Mexico and Puerto Rico, supplying the Kentucky Fried Chicken restaurant chain and other customers.

"We have terminated all of the employees who were taken into custody and will terminate any employee who is found to have engaged in similar misconduct. We are investigating these allegations further," Atkinson said in a statement.

A statement sent Wednesday by ICE to CBS News said "those arrested on federal criminal charges will be in the custody of the U.S. Marshals Service pending the outcome of their case. Others administratively arrested for immigration violations will be interviewed by ICE, and by the Department of Health's Division of Immigration Health Services, to determine if they have medical, caregiver, or other humanitarian issues."

Pilgrim's Pride has had previous trouble with employees in Arkansas. In January 2007, police arrested a manager at the company's De Queen plant who rented identification documents for $800 to get a job there.

The company has said its policy has been to fire employees who cannot clear up discrepancies in their documentation.

Wednesday's coordinated raids began at 5:30 a.m., said John Ratcliffe, U.S. attorney for the Eastern District of Texas. He said agents went to homes as well as the plants.

Ratcliffe said authorities were working to ensure that any children of detained workers were getting proper care. Texas Child Protective Services spokeswoman Shari Pulliam said the agency was notified about the raid but has not had to take custody of any children.

"I hope that the message from today's operation is clear," Ratcliffe said. "We are intent on stopping immigration fraud and identity theft and we will aggressively prosecute anyone who uses another person's name or Social Security number for the purpose of working illegally in this country."

Those whose identities were stolen were denied benefits, told they owed taxes and even arrested as a result of the crime, Myers said.

DJs on a Spanish-language radio station told listeners to be careful Wednesday after reporting news of the raid. After the arrests, many of the dozens of businesses in town that cater to Latino immigrants had few customers or none at all.

"It's sad and scary," said Sheita Delacruz, who works at her mother's dress and gift shop.

It was at least the fourth round of raids at U.S. poultry plants in the past three years. Agents arrested about 160 illegal immigrants in Fairfield, Ohio, last May. Separate raids three months apart in 2005 netted about 120 arrests each in Arkadelphia, Arkansas, and Stillmore, Georgia.

The poultry raids were the largest of several immigration enforcement actions across the country Wednesday.

Agents arrived before dawn at a Houston doughnut plant and arrested almost 30 workers suspected of being in the country illegally. Robert Rutt, the agent in charge of the Houston ICE office, said some of the people arrested lived at the Shipley Do-Nuts dough factory, a four-block plant that includes a dormitory for workers.

Authorities said the workers were forced to staff the Mexican restaurants for long hours with little pay to work off smuggling fees and rent.

The restaurants' owner, Simon Banda, who also uses the name Jorge Delarco, of Depew, New York, is charged with conspiring to harbor illegal aliens. He appeared in court without a lawyer Wednesday and was given until Friday to hire one. Magistrate Judge Hugh Scott ordered him detained until then.

In Atlanta, a federal grand jury indicted 10 people from suburban Atlanta employment agencies on charges they placed illegal immigrants in jobs at Chinese restaurants and warehouses in six states. The agencies are accused of developing a network to "recruit and exploit" undocumented workers, said Kenneth Smith, special agent in charge of the ICE office in Atlanta.

Between October 2006 and April 2008, the agencies advertised their services and charged immigrants a fee for finding a job, without requiring any proof that the workers were allowed to work in the U.S, prosecutor David Nahmias said.

The charges are not related to the Pilgrim's Pride raids.