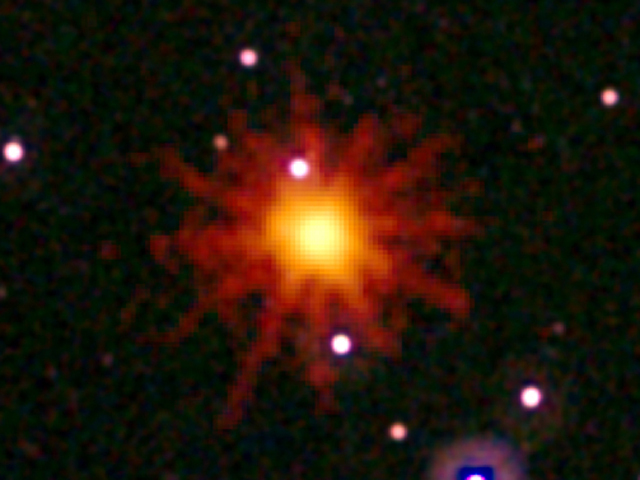 LONDON - A group of researchers claim they've found the most distant explosion ever detected, a pulse of high energy radiation sent by a disintegrating star near the very edge of the observable universe.

The stellar blast was first spotted by a NASA satellite in April 2009, but researchers announced Wednesday that they have since gathered data placing it more than 13 billion light years away - meaning that the event took place when the universe was still in its infancy.

Andrew Levan, one of the scientists behind the discovery, said this blast from the past blew open a window onto the universe's early years, showing that massive stars were already dying within the first few hundred million years of the birth of the universe.

This particular explosion wasn't a supernova but a gamma ray burst, the name given to a short but powerful pulse of high energy radiation. Such bursts, thought to result from the collapse of massive stars into black holes, shoot jets of energy across the universe.

Charles Meegan, a researcher in gamma ray astronomy, said that a typical burst "puts out in a few seconds the same energy expended the sun in its whole 10 billion year life span."

"You can't get your arms around that very easily," he said. "I can't. And I've been thinking about it for decades."

Not only are gamma ray bursts more powerful than supernovae, they're faster too - typically lasting only a few seconds or minutes. They work differently as well. Whereas a supernova spreads its radiation all around, gamma ray bursts shoot it out in narrow beams, like a laser, which can make them hard to detect.

NASA's Neil Gehrels, who serves as the lead scientist on Swift, the gamma-ray detecting satellite which first picked the distant burst's signal, said that "we only see about one in 1,000 of all the gamma ray bursts that go off."

So when a promising one comes along, scientists take note.

Levan said he was at an early morning meeting in Sweden on April 29, 2009, when his phone went off, alerting him to the explosion. From that moment on, it was a race against time. Gamma ray bursts come and go far too quickly for telescopes, but their afterglows linger for a little while longer and can be analyzed by astronomers.

Levan rushed out of the meeting.

"Fortunately the office was next door," he said. "So I was able to rush into the building and get online."

There Levan got a little less lucky. Some of the world's most powerful telescopes were soon tasked with tracking the burst, but the view from Chile's La Silla Observatory was hampered by unfavorable atmospheric conditions, while two Hawaiian telescopes - Gemini North and the United Kingdom Infrared Telescope - were buffeted by high winds. Chile's Very Large Telescope managed to train its eye on the sky for a while, but by then it was already getting light.

The glitches deprived Levan's team of some important data, but they spent the next two years painstakingly trying to build context and double-check their observations. His paper, due to published soon in Astrophysical Journal, stated with 90 percent certainty that the gamma ray burst had been spotted between 13.11 billion and 13.16 billion light years away.

Gehrels, whose satellite identified the burst but who wasn't involved in drawing up the paper, said he believed Levan was right - praising his team's "careful analysis."

But other outside experts said they were skeptical. Richard Ellis, a professor of astronomy at the California Institute of Technology, called the discovery "potentially very exciting" but said that there wasn't enough data to justify such a bullish estimate. In any case, he warned of the difficulties associated with peering across such a vast distance.

"This is plonk at the frontier, where we have very little idea what's going on," he said.

Richard McMahon, a professor of astronomy at Cambridge University, made a similar point, pointing out that the mechanics of how gamma ray bursts occurred were still too little understood to rule out the possibility that some other factor could be at play.

"There are still some surprises in store for us," he predicted.

Levan teaches astronomy at the University of Warwick, near the English city of Birmingham. The paper's lead author, Antonio Cucchiara, is at University of California, Berkeley. The paper counts 31 other co-authors.