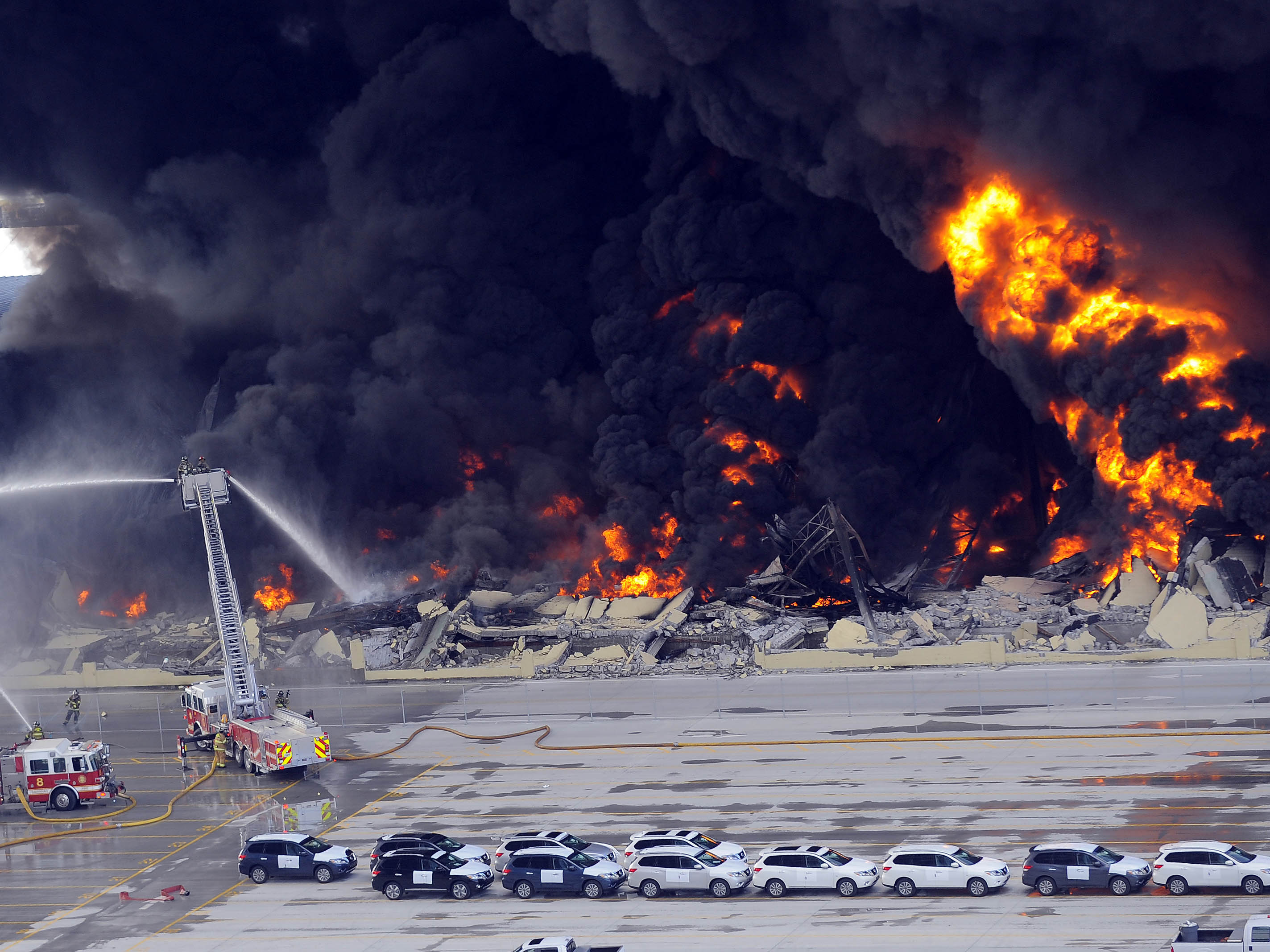 SAVANNAH, Ga. - Firefighters battled a giant blaze fueled by 5,600 tons of rubber Saturday at the Port of Savannah, where a towering column of black smoke could be seen from miles away and prompted police to urge nearby hotels and college buildings to evacuate or keep people inside.

Firefighters were trying to contain and extinguish a fire raging inside a warehouse covering 226,000 square feet at the port's Ocean Terminal just west of downtown Savannah. The cause of the fire wasn't immediately known, but all port workers were accounted for and unharmed.

"The warehouse is full of rubber, so it's a rubber fire," said Robert Morris, spokesman for the Georgia Ports Authority.

Savannah Fire and Emergency Services spokesman Mark Keller said the fire is contained, but there's no telling how long it will take to burn out.

Firefighters were using industrial pumps to suck up river water and blast it through water cannons at the fire. Crews will continue soaking into the night and Sunday if necesary.
Savannah-Chatham County police closed some streets near the port terminal west of downtown Savannah and smoke slowed traffic on the Talmadge Bridge that spans the Savannah River to South Carolina. Police also asked a few hotels near the port terminal and the Savannah College of Art and Design, which has buildings in the area, to either evacuate or keep people inside.

"We're not worried about the fire getting over there at this point," said police spokesman Julian Miller. "It's the smoke. It's going to be heavy, oily and ugly."

June Kramarczyk of Bluffton, S.C., and her husband were traveling to Savannah when they saw the smoke plumes rising in the distance. They pulled over once they reached the river to get a better look.

"It's covering the whole sky in front of us, almost as if there was a volcano going off," Kramarczyk said. "We could see the smoke from 15 miles away. My husband said, 'That's got to be a huge fire.'"

Morris said smoke could be seen from Tybee Island, about 18 miles east of the port terminal. He said raw rubber used in manufacturing was fueling the blaze.

The Port of Savannah is the nation's fourth-busiest seaport for containerized cargo. The Ocean Terminal, which covers 200 acres, handles farm equipment and other heavy machinery as well as automobiles and bulk goods such as wood products and steel.