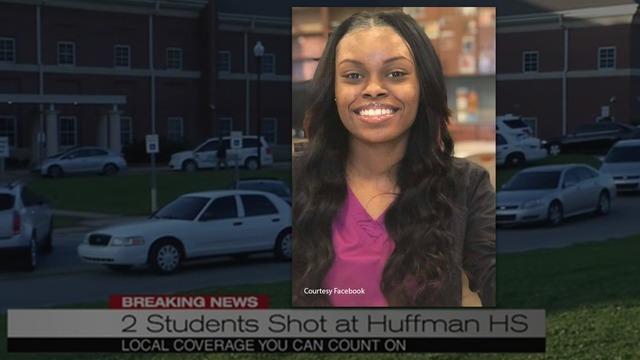 BIRMINGHAM, Ala. -- An official says the Alabama high school where a 17-year-old student was fatally shot in an apparent gun accident has metal detectors but they weren't in use that day. Birmingham City Schools Superintendent Lisa Herring said at a news conference Thursday that the district would examine its procedures after the teenager, Courtlin Arrington, was shot Wednesday in a Huffman High School classroom.

"We have lost one of our brightest and best scholars," Herring said of Arrington.

She said Arrington was an energetic, friendly, and well-liked student who "was lost to senseless gun violence." Arrington, a senior, had already been accepted to Concordia College and wanted to pursue a career as a nurse.

"We are not removed from the fact that Courtlin Arrington, our student, our aspiring nurse, is no longer with us," Herring said tearfully.

Herring said students would pay special tribute to Arrington on the upcoming "National School Walkout Day" March 14. Students across the country are planing to walk out of school for 17 minutes that day to honor the lives of the 17 victims of the school massacre last month in Parkland, Florida and support stricter gun laws. Herring said Birmingham students would walk out for 18 minutes in memory of Arrington.

A 17-year-old boy was also injured in the shooting, which investigators say they believe was accidental.

Police took a "person of interest" into custody Thursday and the Jefferson County district attorney's office is reviewing the case for possible charges.

Investigators continue to look into how the fatal shooting happened. The superintendent says the school has more than 43 entry points, and a combination of wand and stationary metal detectors are used there.

She said she has made a request for additional metal detectors in all Birmingham schools and that going forward they would be in use every day.

Investigators are reviewing surveillance video from the school.