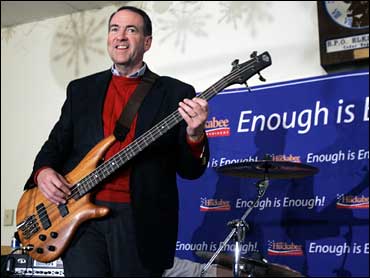 This column was written by José Enrique Idler.

In the run-up to the Republican nomination, a common notion is that Governor Mike Huckabee is the candidate of choice for evangelicals. According to this storyline, the Baptist preacher turned politician is a man of faith who is connecting with evangelical voters because of his Christian platform and, based on this religious link, could thus win the nomination. The main problem with this story is that it ignores how many evangelicals will actually be turned off by the very brand that seems to be boosting Huckabee.

Although it's true that Huckabee commands a significant lead among a specific segment of evangelicals, it's hard to categorize evangelicals nationwide as a monolithic voting bloc. While many are drawn to the self-identified "Christian leader," others will see his Christian rhetoric as a volatile and dangerous excursion that blurs the line between the Kingdom of God and the kingdom of this world.

After taking a decades-long time-out from politics and worldly affairs, evangelicals came back with a vengeance in the 1970s and 1980s through groups such as the Moral Majority. The self-imposed ostracism, due in part to the humiliation suffered at the Scopes Monkey trial in 1925, was officially over when a number of evangelical groups coalesced to flex their muscle in the public square and become political activists.

Many evangelicals, however, have continued to be guided not so much by the "bunker mentality" that sees the world as a sinking ship, but rather by what has been the traditional paradigm of Christ and politics. In a long-standing tradition that can be traced all the way back to Augustine, the City of God - with its spiritual mission and ends - should not be confused with the kingdoms of this world.

Although Christians are called to serve in the world, including politics, they are not sanctioned to use the political sword of the magistrate for spiritual purposes. Since Christ and politics are separate, the Christian calling is not to become a politically religious activist, but rather to serve in the public square in a God-honoring way without imposing explicit Christian principles on others.

The American version of the Presbyterian Westminster Confession of Faith puts the point this way:

"It is the duty of civil magistrates [including Christian ones] to protect the person and good name of all their people, in such an effectual manner as that no person be suffered, either upon pretence of religion or of infidelity, to offer any indignity, violence, abuse, or injury to any other person whatsoever…"

The political leader, although Christian he or she may be, is not a "Christian" leader as such, but a leader for all peoples.

The Southern Baptist Convention's Faith and Message makes a similar case. The statement of doctrines holds that "church and state should be separate" and "…no ecclesiastical group or denomination should be favored by the state more than others." Furthermore, "the church should not resort to the civil power to carry on its work," particularly since "the gospel of Christ contemplates spiritual means alone for the pursuit of its ends."

In a pluralistic society like ours such a view is not only commendable, but necessary. The fact is that in addition to a common public religion - with general injunctions like "In God We Trust" - Americans are informed by a variety of private faiths and creeds. Thus it's necessary that, unless placed in a situation that asks for personal beliefs, a public leader be capable of refraining from specific doctrinally laden statements of belief and governing on the grounds of common narratives and principles.

Evangelicals come in different shapes and stripes. For those guided by the traditional separation of faith and politics, Huckabee's Christian rhetoric will come across as a politically shallow and also spiritually dangerous move. Blurring the lines between faith and the political sphere means that Christianity and religious imagery are demoted to become simply one more instrument for political gains. This will smack many evangelicals not of authenticity, but rather misguided opportunism.
By José Enrique Idler
Reprinted with permission from National Review Online