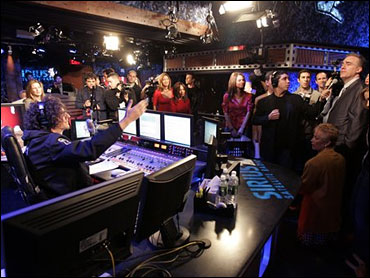 Howard Stern began his new satellite radio show on Monday by putting to rest rumors that he got married to his longtime girlfriend, model Beth Ostrosky — in a comment complete with a federally banned expletive.

"I am not married. It's a nice feeling that we get along great. We're very happy and I don't want to (blank) it up," said Stern, who is finally free of government decency laws on Sirius Satellite Radio Inc.

Stern has promised everything from stripper poles to live sex on his new show.

But he used only a moderate amount of swearing and said his show was more about ideas, not the use of the f-word. Cursing, he said, would be part of the natural progression of speech.

"I feel this is a culmination of dreams for me," Stern said in an on-air news conference.

"The only limit is our mind," he said.

Last month, however, Stern told correspondent Ed Bradley there is a line he won't cross.

"There are things that I won't do on the radio. I mean, the next logical question is, what won't you do. I say, well, you know, you've got to find out when you're on the air," Stern said.

At the time his October 2004 deal with Sirius was announced, the company said it could be worth up to $500 million over five years to headline two Sirius channels.

Stern broadcast his last FM radio show on Dec. 16 as thousands of fans gathered outside his New York City studio.

At the start of the show Monday, Stern dished up some phone sex with Playboy bunny Heidi Cortez, who has her own phone-sex nighttime show lined up on Sirius.

Stern also introduced George Takei as his new on-air personality. Takei, who played Sulu on "Star Trek" and who last year publicly said he is gay, will serve as announcer. After the first week, he will record segments for the show but will not be in the studio.

"The revolution has begun" in new radio, Takei said Monday.

Even before his first day on the job, the shock jock recruited listeners for the $13-per-month service: The Sirius audience expanded from 600,000 at the time the switch was announced to more than 3.3 million subscribers, Stern said Monday. At the same time, Sirius stock has roughly doubled.

Stern had frequently tested and sparred with the regulatory Federal Communications Commission during his 25-year run on the public airwaves, often having his morning show interrupted by censors.

"I thought Clear Channel and companies like that were going to fight the FCC," Stern, 51, told the Associated Press last month. "I kept hanging around. And they never fought back. ... They are cowards. They bow, and they deserve to be destroyed."

On Monday, caller after caller wished Stern luck — and he reacted with annoyance.

"I've been doing years and years of shows but I get irritated when people wish me luck," he said. "You should have wished me luck 25 years ago."

During the on-air news conference, Stern was asked how he felt about listeners having to pay to hear his new show.

"I believe that people will pay for radio," he said. "It's everything iPod can't be. IPod can't give you content and we can."

One guest who joined Stern on Monday was the shock jock Bubba the Love Sponge, who was fired by Clear Channel two years ago. The DJ, who legally changed his name from Todd Clem, has been recruited by Stern to host an afternoon drive time show on Channel 101, one of two Sirius channels managed by Stern.