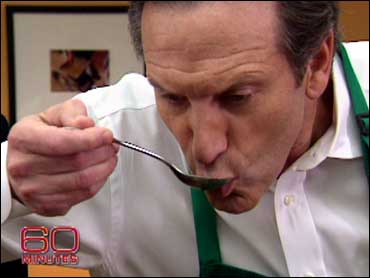 Who would have believed that Americans would line up by the millions to pay $4 for a cup of coffee? Who would have imagined we would go into a coffee shop and casually ask for a double tall, one pump, vanilla skim, caramel macchiato? What the heck is a macchiato anyway?

Well the guy who did believe is Howard Schultz, the star of Starbucks. Schultz is given to leaps of imagination — he had to be, as he started out as a poor kid in Brooklyn who sold his own blood just to get through college.

Today as head of a $29 billion multinational, Schultz is not without his critics; some mockingly call Starbucks "Fourbucks." But when 60 Minutes correspondent Scott Pelley met Schultz, he found a salesman and a showman, who is creating his own subculture and intends to take the whole world along.


At the Starbucks headquarters in Seattle, they don't drink coffee like you and me. Howard Schultz analyzes each slurp, as though he's letting you in on a secret.

"You taste that earthiness? Like a Bordeaux wine. That is pretty good," Schultz points out.

Here people called "coffee masters" talk about finding romance and passion in a cup like they were cream and sugar. Schultz has brewed up a coffee culture that's, sometimes, a little hard to swallow.

"OK, it is a corporation," Schultz acknowledges.

"No, I mean this is how we feel. You might say, 'OK, they're full of crap.' And you know, this is how we feel," says Schultz. "We're in the business of human connection and humanity, creating communities in a third place between home and work."

"But it's not a cult, this is a corporation, it is a for-profit business. But our approach for 30-plus years has been unique and different, not better just different. Not better, just different," Schultz replies.

That approach created a market that didn't exist and a company that now doubles its sales every three years.

The company, Schultz says, currently has about 11,000 stores in 37 countries and they are opening an average of five stores per day.

"It's an unbelievable number to me to be honest with you," he says.

There really are Starbucks across the street from each other. They do that to cut down on the lines. Starbucks says it has 40 million customers a week and the company brews 227 million gallons of coffee a day.

The operation that feeds that monster is massive. At a roasting plant outside Seattle, green coffee beans are shipped in from 28 countries. This plant will go through up to two million pounds of beans in a week and there are four plants just like it. Starbucks has become so pervasive it, has spliced itself into the national DNA, being mentioned on programs such as Oprah, Jeopardy and even the Simpsons.

While Schultz acknowledges there is a bit of a Starbucks blowback, he doesn't think the company is crushing the life out of mom and pop coffee shops.

"We are so different and when people understand that, they welcome us," he says. "For example, first off, we created an industry that did not exist and in our wake, the momentum of Starbucks, so many local and regional companies and mom and pops have not only surfaced, but succeeded."

Still, Schultz has felt the wrath of anarchists, who trashed a Seattle store in an anti-globalization riot.

"There is a criticism, and you've heard it, that Starbucks is homogenizing the world; you're taking the culture out of places in China and Japan and Americanizing them," Pelley says.

Schultz says he has heard that and is not irritated by such criticism. He says "it's just off base."

"And when people say you're an evil empire bent on world domination, you say?" Pelley asks.

"I hate that. I hate that, but I realize you're always going to have critics," Schultz replies.

The original Starbucks opened in 1971 on Seattle's sea front. It was a small store with no big plans. "Starbuck" is the name of a character in the novel Moby Dick.

Schultz worked as an appliance salesman pushing coffee makers, when he stopped at Starbucks to make a sales call.

"When I walked in this store for the first time, I know this sounds really hokey, I knew I was home," Schultz says.

He quit his job and went to work in the store, which at the time was just selling beans and machines. Adding an espresso bar was his idea. A few years later, he was offered a chance to buy Starbucks, which by then had grown to six Seattle stores. He set out to find investors.

"If I came to you in 1987 and I said to you, 'Even though coffee consumption in America is down, I wanna build a company that was gonna sell coffee not in a porcelain cup, but in a paper cup, with Italian-saying words that no one could pronounce, for $3 a cup of coffee,' would you invest?" Schultz asks.

Schultz says Pelley would have had a lot of company. But had he invested $10,000 at the start, it would be worth more than $5 million today. How did Schultz do it? With marketing and salesmanship and even, he admits, a little hype.

"But please tell America and the rest of the world why the small drink is called the tall?" Pelley asks.

"Well, I think, you know, when you walk into a store, you don't wanna say, give me a small. You wanna say give me a tall. And, so, there's a little bit of marketing in there," Schultz explains.

Schultz likes to tell people that Starbucks is just a simple coffee company, but behind closed doors, there's a Starbucks laboratory inventing next year's drinks.

"It takes our beverages from the state of ideation to the actual development that you see going on right now," explains Jim Donald, the company's CEO, as he showed the 60 Minutes team around.

What is the state of ideation?

"State of ideation. Beverages have to be created. And they're created by looking at what trend is in say, the fashion industry, what color's hot right now," he explains.

They think green is hot and so they developed something called a "Green Tea Frappuccino." At Starbucks today, there are now 55,000 possible drink combinations.

"Cinnamon dolce latte. Vanilla white chocolate mocha? Caramel macchiato? Where does this stuff come from?" Pelley asks. "You're making this up."

"You walk into a retail store, whatever it is, and if there's a sense of entertainment and excitement and electricity, you wanna be there," Schultz says.

Starbucks is theater. That showmanship and salesmanship have made Schultz something close to a billionaire.

But that is something that he could never have imagined as a boy. Schultz grew up broke living in a public housing project in Brooklyn. There are bullet holes in the door leading to apartment 7G, in the building where he lived.

Dreams, he told us, seemed futile after his father, Fred, was injured on the job.

"This is the hallway I walked down at the age of 7 and opened up that door and saw my father on a couch with a cast," Schultz recalls. "He broke his leg on the job. He was a delivery driver, picking up and delivering cloth diapers. Terrible job.

"When he fell on the job, he basically was turned loose. He was out of work. There was no hospitalization, no health insurance, no workman's compensation and we were done as a family and I saw the hopelessness, I saw the plight of a working class family, I saw the fracturing of the American dream first hand at the age of 7. That memory scarred me."

Schultz has organized his company around that memory. He provides health insurance to employees who work as little as 20 hours a week. He raised prices to do it. And now Starbucks spends more on health care than it does on coffee.

"What I've said to our own people is that we will not — you're never supposed to say never, but I said never — we will never turn our back on this benefit for our people," says Schultz.

When you pay $4 for coffee, you're funding Schultz's social agenda — the health care, stock options for employees and more. He even pays farmers higher than market rate for beans.

Schultz got out of the housing project but something about it never left him.

What was he thinking, visiting his old home?

"Just everything that's happened to me since standing here, how many times I walked through that door," he says. "I think there were many moments when people said, not to me directly, but I remember hearing things that, 'Don't aim too high.' Not my parents, but people. 'You're from Brooklyn, you're from the projects. Don't aim too high.' "

All these years later, Schultz is aiming to at least triple the number of stores to 30,000 worldwide. He thinks that China may be his biggest market and he has nearly 400 stores in the region already, including one in Beijing's Forbidden City.

What was once a coffee bar has become a marketing machine for an expanding entertainment business. It produces its own music and, this week, Starbucks opens its first movie. It's called "Akeelah and the Bee" as in spelling bee, a feel-good film about a poor kid who triumphs.

It's called "Akeelah and the Bee" as in spelling bee, a feel-good film about a poor kid who learns how to spell big words. Words like prestidigitation.

"Prestidigitation" means skill in pulling off illusions, like a magician. Howard Schultz admits there was more than a little sleight of hand in conjuring up Starbucks and turning the dullest, most common drink in America, into something mysterious.
By Tom Anderson
By Tom Anderson

Saving Jewish artifacts during the Holocaust
Thanks for reading CBS NEWS.
Create your free account or log in
for more features.
View CBS News In
CBS News App Open
Chrome Safari Continue
Be the first to know
Get browser notifications for breaking news, live events, and exclusive reporting.