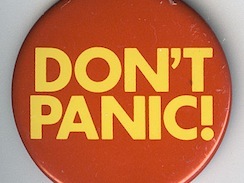 (MoneyWatch) COMMENTARY A recent Forbes article makes what I think is a very astute observation: "The best proof of an expensive college education's value may be whether it provides graduates with the critical thinking skills to spot all the bum advice hurled their way as they head off into the world."

In his early days at General Motors (GM), a young Bob Lutz was told by an executive VP, "You've made your mark, so I want you to stop taking risks... let yourself drift downstream without controversy, and you'll someday be one of the top people in the company." So Lutz quit and became a top executive at BMW and Ford (F) before finally returning to GM.

Sure, I've gotten my share of bad advice. When I was trying to decide whether to ditch engineering management for sales, pretty much everyone said, "Don't do it because you'll never be able to go back." I didn't listen, never looked back, and that ended up being my path to executive management.

That said, I've also been the recipient of some epic advice that changed my life for the better. After graduating from college, my girlfriend's father told me that the world would go digital and that I should go back to school, get a degree in electrical engineering, and pursue a career in semiconductor chips. That was 1977. Good thing I listened to him.

As for critical-thinking skills, I'm not sure that's entirely how this sort of thing works. Sure, some of it is reasoning, but there's also gut feel, among other things. When it comes to career advice, here's the five-part filter I use to figure out if I should listen or not:

What's your gut say? Whatever feels right or what you really want to do is usually the best course. Even if you're wrong, you'll be happy you did it and you can always try something different later. When it comes to following your passion, forget the odds. Remember, you only get one shot at life and regret is a bitter pill to swallow.

Consider the source. If it's someone you trust, that means a lot. Trust is a survival skill. If you tend to make a lot of bad choices about who to trust, that's another story. If the adviser has skin in the game, meaning he stands to gain or lose based on what you decide, then take it with a big grain of salt. If he's trying to sell you something, then definitely ignore it. That's just a conflict of interest, period.

No risk, no reward. If it sounds too easy, it probably is. If it sounds really hard, that's probably about right. If it's terrifying, at least ask yourself what you're afraid of. If it's something you should probably confront, then do it. If it's a dumb risk, meaning you'd likely be giving up something you really don't want to, then don't do it. Just remember, if you play it safe, then safe is all you'll get.

When you hear "don't," don't listen. Anything with the word "don't" or "shouldn't" in it, run the other way. As the poet Robert Browning famously said, your "reach should exceed your grasp" -- at least until you've convinced yourself that you've tried enough and it's time to give up.

What are your other options? If you don't have any better offers or ideas, you're probably better off just doing whatever until you or somebody else comes up with a better idea. But if it's not working out or making you happy, cut bait as soon as possible. There's a cost to missing opportunities while stuck somewhere you shouldn't be.

What's the best or worst career advice you've ever gotten?