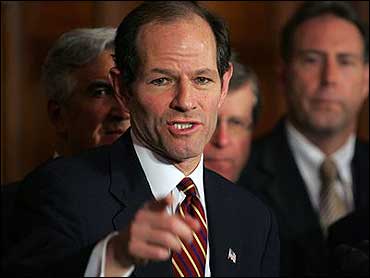 CBS News has learned the investigation into New York Gov. Eliot Spitzer was sparked last summer by a Suspicious Activity Report, or SAR, filed by a financial institution.

In tracing the "unusual movements" of money linked to Spitzer, agents discovered it was not political corruption, as suspected, but a prostitution ring.

It was a sitting governor allegedly going to great lengths to hide the transfer of thousands of dollars in cash into the accounts of shell companies through HSBC and other banks.

According to court papers, the shell companies QAT Consulting Group and QAT International turned out to be fronts for Emperor's Club VIP, the now notorious high-priced online prostitution ring featuring 50 so-called "models" catering to the needs of worldwide clientele.

Through a court-authorized wiretap, the FBI allegedly implicated Spitzer as notorious "Client 9" of the ring, which operated out of a brownstone in Brooklyn, N.Y.

As part of a 47-page complaint filed against four people arrested in the case last week, Client 9's needs and desires are laid out in sordid detail: A tryst at a glitzy Washington, D.C., hotel on the eve of Valentine's Day. Waiting in room Room 871, a pretty, petite brunette named "Kristen," a $1,000-an-hour call girl.

Adding she "liked" the client with a reputation as "difficult," who sometimes asked "to do things you might not think were safe ... very basic things."

The next morning the governor testified at a bond investment hearing on Capitol Hill, revealing nothing of a side of Eliot Spitzer that he had evidently tried so hard to hide.