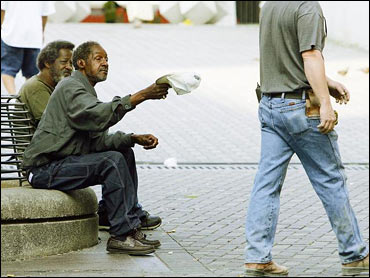 Every year, the Census Bureau uses a 40-year-old formula to determine how many poor people there are in America, a method that many experts think was outdated years ago.

The Census Bureau acknowledges the issue by also announcing alternative poverty rates based on different measurements of income and poverty. This approach has fueled an academic and political debate, but has yet to produce policy changes.

In August, the bureau announced that 12.7 percent of Americans lived in poverty in 2004, making it the official poverty rate. Last week, the bureau said the rate might be as high as 19.4 percent, or as low as 8.3 percent, depending on how income and basic living costs were defined.

One outside analyst said he could cut the poverty rate in half using census data and a pocket calculator. But his exercise would change only the definition of poverty. It wouldn't make anyone richer.

"I know virtually no one who thinks the current poverty line is an accurate measure of poverty," said Rebecca Blank, co-director of the National Poverty Center at the University of Michigan.

Blank served on a National Academy of Sciences panel that recommended changes to the poverty measure 10 years ago. But the issue was too politically sensitive to resolve, she and others said.

Some proponents of change want a higher poverty rate to encourage spending on the poor; others want a lower rate to make it easier to cut spending.

"Everybody's got their favorite way of measuring it because the outcome fits their needs," said Martha Farnsworth Riche, who headed the Census Bureau under President Clinton.

The Office of Management and Budget dictates how poverty is measured. But Congress has a keen interest in the issue because it affects so many programs, dollars and lives, Riche said.

"There are hundreds of programs moving hundreds of billions of dollars in benefits that are tied to the poverty line," said Douglas Besharov of the American Enterprise Institute.

Part of the problem is that the experts don't agree on how to define income and basic living expenses.

The official poverty level is $19,307 for a family of four, $12,334 for a family of two. But the calculation includes only cash income before deductions for taxes. It excludes capital gains and it does not take into account accumulated wealth or assets, such as a home.

It was based on a calculation of basic living expenses in the 1960s, and has been updated only to reflect inflation.

The result is that a single parent making $13,000 a year is living above the poverty line, while someone with a $1 million house who takes a year off work to travel the world could be below it.

The current system has defenders, but even many of those would like to see changes.

John Cogan, a senior fellow at the Hoover Institution at Stanford University, said the current system does a good job of gauging whether poverty increases or decreases from year to year.

"Can the way we measure poverty be improved? Absolutely," Cogan said. "Does that mean we should just ignore the country's poverty statistics? Definitely not."

Among the proposals to change the way the government measures poverty: