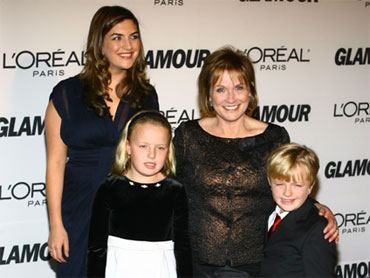 Elizabeth Edwards will be laid to rest in a Raleigh cemetery Saturday near her son Wade, who died 14 years ago in a car accident at the age of sixteen.

During her six year battle with cancer at the age of 61, Edwards did her best to prepare her family for her own death, reports CBS News Correspondent Elaine Quijano.

"The most important thing you can give your children are wings," she told the CBS News broadcast 60 Minutes, "because you're not going to always be able to bring food to the nest; sometimes they're going to have to be able to fly by themselves."

She wrote letters for her children - 28-year-old Cate, 12-year-old Emma Claire and 10-year-old Jack -- filled with practical advice on how to choose a church and even a spouse.

"What she wanted to do," family friend Jennifer Palmieri told CBS News, "was prepare them to live a good life. She prepared them to be strong and to really live life fully.

But, the last year of her life was not without turmoil. In January, she separated from her husband, former presidential candidate John Edwards, after learning he had fathered a baby with a campaign staffer, Rielle Hunter.

Still, John Edwards was by his wife's side when she died.

"It was very important to Elizabeth," Palmieri says, "that the father of her children be in good shape and that he be able to carry on and live a good life for Jack and Emma."

Although, says Quijano, there's speculation John Edwards will raise the couple's two younger children, before she died, Elizabeth said she was doing all she could so that they, as she told the Detroit Free Press, would be "able to function without an involved, engaged and admiring parent."

Moylan, who went there after Elizabeth passed away, said, "There's more laughter than tears. There's amazing strength there in that home for the children. Their sister is with them, their aunt, their uncle, their father and their friends. There's a lot of love in that family and in that house."

"Elizabeth always believed that you lead by example," Moylan said when asked how she got the youngsters ready for her death, "and I think that's what she did with her children. She led a life of dignity. She led a life that made a real difference. Her children saw that. They saw the strength in their mother. They saw the love of their mother. And I think they will be very, very strong people going forward."

How is John Edwards coping with her death?

For that and to see the entire interview, click on the video below: