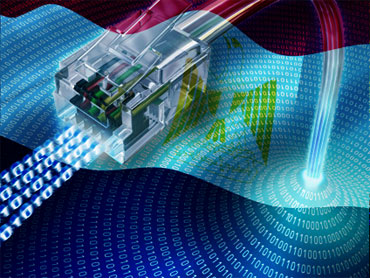 NEW YORK - The uprising in Egypt is a quintessential 21st century event - born on Facebook and other social networking sites - which led the government to cut off Internet service.

Science and Technology correspondent Daniel Sieberg reports on this desperate effort to keep a lid on dissent.

The Internet blackout was a surprising move for a nation previously known for being open - compared to other countries in the Mideast.

"I think what's unprecedented is we've never seen such a connected country like Egypt be disconnected from the internet," said Craig Labovitz of Arbor Networks.

Here's how it happened. In the United States, it's companies like Comcast or Time Warner that provide Internet access. The Egyptian government told their Internet service providers to shut down - causing Egypt to basically disappear off the Internet map.

Telecom Egypt went first just after midnight Friday morning. Within six minutes, the five providers covering about 93 percent of the country went down - and have not come back.

Only two other countries have ever shut off so completely: Nepal in 2005, and Myanmar in 2007.

It would be have to be something pretty dramatic for the Internet to be shut down here. But Congress is considering a bill to expand the president's authority.

Holly Pickett lives in Cairo, and says cutting off the online world may have backfired. "When that happened and people realized the Internet had been shut off and the government had done that to them - this really angered people."

But demonstrators also know that the Internet can be a double-edged sword. Before the shutdown a 26-page protest manual warned protestors not to circulate information on social networks - for fear that the government would be watching.

"All of that can be very easily exploited by dictators or the secret police," said Evgeny Morozov, author of The Net Delusion.

People are able to get around the internet ban the old-fashioned way by using a land line to dial up a connection in another country.

Cell phones are back up and Google is offering a service that lets people turn a voice mail into an instant twitter message. No internet required so some interesting ways of trying to get around it.