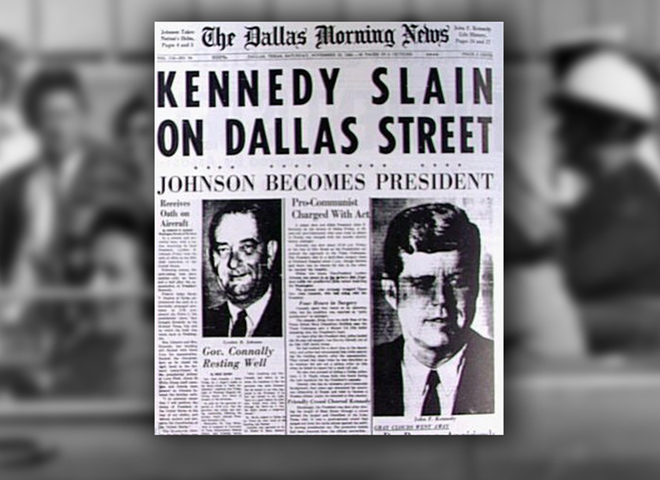 (CBS News)  A Texas city grieved, and ultimately came back, following the murder of a president. Mo Rocca visits:

On the morning of November 22, 1963, President and Mrs. Kennedy awoke in Suite 850 of Ft. Worth's Hotel Texas, greeted by a stunning collection of art brought together to honor of their visit -- works by Pablo Picasso, Thomas Eakins, Franz Kline, and a masterpiece by Vincent Van Gogh that was installed in the master bedroom.

"It was a statement that, you know, in Texas, we know who Picasso is and we agree that he's an important 20th-century artist," Barker said.

"That was very much part of their thinking, yeah," Barker replied.

The big Texas welcome only got bigger when the Kennedys arrived in Dallas.

"Dallas had a marvelous future in front of it," said Gary Mack, curator of the Sixth Floor Museum at Dealey Plaza. "There was a lot of construction going on, and the city was moving forward very quickly."

But the president would also see an ad in the Dallas Morning News, accusing him of treason.

"They don't address him as 'Mr. President,'" said Rocca.

"No, they don't. No, they don't," said Mack. "The ad was insulting by 1963 standards. And he read a little bit of it and turned to Jackie and said, 'Well, we're headed into nut country today.'"

Indeed, Dallas was developing a reputation for less-than-welcoming behavior: only weeks before, visiting U.N. Ambassador Adlai Stevenson had been whacked in the head by a protestor.

Earlier in 1960, vice presidential candidate Lyndon Johnson and his wife Lady Bird were besieged by an angry gaggle of Republican women, dubbed the "mink coat mob," who reportedly cursed, spat at and pricked the couple with bobby pins.

Lindalyn Adams was outside Dallas' Adolphus Hotel that day, part of the protest. "It was inexcusable, that's just a terrible thing," she told Rocca. "We were told to go to the Adolphus, so I did, and I was way back, I remember, by the cigar counter. And I heard all of this commotion up in front. And I thought, 'That just sounds terrible and I am not staying here, I'm leaving.' Which I did."

On November 22nd, Adams was hosting a ladies luncheon when she heard the terrible news.

"It was, you know, horrible shock, horrible, in every single, possible way that you can imagine," she said, "that this president was killed in our city and how horrible that he was killed, how devastating."

"After it happened," asked Rocca, "did you worry that Dallas had something -"

"Well, you didn't have to worry because we were instantly blamed, and it started almost instantaneously because of those other incidents." She said, along with grieving for the president, there was also grieving "for the city that we love."

He told Rocca he was "smitten" by the first couple. "I thought, that's what a president and a first lady ought to look like. They were just absolutely charismatic. And they turned the corner, and boom, that first sound."

The world was stunned. But nowhere were people more shaken than in Dallas.

"The day after, the city was silent," Allman said. "There was just a pall over the entire community. And I think a lot of people were going through perhaps an intensive soul-searching. The churches were full, and it was almost civic penance on a massive scale.

"I think a lot of people were asking for the first time, Did I do something? Did I somehow create an environment in which something so shocking could happen?"

Dallasites may have wondered about their part in the tragedy. The press and world seemed to have no doubt. Dallas was branded "the city of hate."

Even though, Gary Mack points out, "To this day, after 50 years of studies, there's nothing that connects the city of Dallas or the right wing extremists to Lee Harvey Oswald, who was an admitted leftist."

Still, the city was blamed by many for the murder of a president.

"Traveling the world in the five years after the assassination was a very unsettling experience," said Robert Decherd, the great-grandson of George Bannerman Dealey (for whom Dealey Plaza is named). "Particularly in Western Europe and places where the president was so admired. You'd be doing fine in a conversation until you reach the 'Were are you from?' question, and tone would change almost instantly."

Decherd would go on to run his family's media empire, which includes the Dallas Morning News.

"The city of Dallas didn't do well coping with the assassination, that's a well-known fact," he told Rocca. "And when you think about how the city responded after the president's death, it was a matter of trying to work through shock."

During the 1970s, the book depository stood vacant. Yet visitors streamed to the site, making it the city's number one tourist attraction -- a magnet for hawkers and conspiracy theorists.

Lindalyn Adams said, "I really have to tell you, I was offended that that's all they really wanted to see in our city."

What happened at Dealey Plaza could not be erased. Lindalyn Adams would lead the effort to turn the reviled building into a museum. "I went from not wanting to even look in that direction to realizing that something needed to be done," she said.

Over the years, two other things would help change the way the world saw Dallas.

"Things started to change once the Dallas Cowboys became a winning football team," said Mack. "And then this TV series with Larry Hagman called 'Dallas' appeared. People in those days started seeing the city differently. Oh, yeah, the Kennedy assassination was still part of it. But it wasn't the main part anymore."

Maybe not the main part, but an indelible part of Dallas' story.

"What happened here was one of the great tragedies in the history of our country," said Decherd. "It could have happened anywhere, but it happened here. And we bear responsibility for commemorating the life of a great American, a man who was dynamic in ways that are well-chronicled and who was here in Dallas having, actually, a very good day."