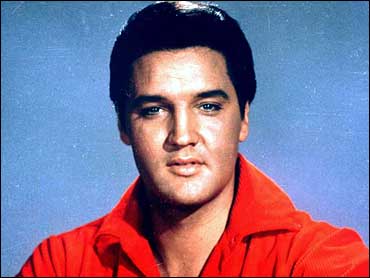 The reigning king of rock 'n' roll or an easy punchline?

Twenty-five years after his death, Elvis Presley continues to be an enormous pop culture presence — both as a beloved musician and an easy laugh.

White jumpsuits, big ol' sideburns and "Thankyouverymuch" make easy marks. Presley, once the symbol of beautiful, rebellious youth, didn't help himself much near the end. There's the specter of the pill-popping superstar crooning "My Way," or falling off the commode and dying at 42.

But Presley's role in ushering in a cultural revolution also reverberates. Many performers credit him as an inspiration. His worldwide album sales are estimated to top 1 billion, and his music is reaching new generations.

As for the old fans, tens of thousands are expected to file into Graceland, Presley's home-turned-tourist-attraction in Memphis, to mark the 25th anniversary of his death on Aug. 16. For them, he's no joke.

"Why are media people surprised every time they see this?" says Dave Marsh, a music critic and Presley biographer. "Forty-seven years after 'Heartbreak Hotel,' and they still don't get it, or still think it's going to go away."

In some ways, not much has changed since the 1950s, when Elvis — the first white artist to successfully take the style and sound of black rhythm and blues to the mainstream — had to fight for respect from critics who derided him as a white-trash aberration.

Country singer Dolly Parton says Presley is comparable to a deity where she grew up, in the hills of East Tennessee.

"I don't think he will ever die down," Parton said. "He's considered by many to be like a religious figure, like Jesus. ... I don't know how to explain it, but it's there, and it's real, and people love it."

In the broader culture, references to Presley are everywhere, from the Pennsylvania State Lottery, which uses his image to sell a $2 instant game, to the white jumpsuit worn by Britney Spears for her pay-per-view special from Las Vegas. Elvis impersonators appear in Hollywood movies from "Honeymoon in Vegas" to "3000 Miles to Graceland." "Elvis has left the building" remains a catchphrase, and posthumous Elvis sightings an urban legend.

Rapper Eminem, in his new song "Without Me," says his fans are embarrassed that their parents like Presley. Then he gives Presley some backhanded respect with this comparison: "Though I'm not the first king of controversy/I am the worst thing since Elvis Presley/To do Black Music so selfishly/And to use it to get myself wealthy."

The accusation of cultural theft has also been raised by some black artists. Marsh defends Presley, however, as unusually honest about his music's origins, compared to other white singers of the time.

"(Elvis) told people where it came from, without shame or hesitation. ... He was a race mixer, which is why a lot of people didn't like him."

The Presley estate — owned by Elvis' daughter, Lisa Marie Presley — is trying to protect and promote his legacy by focusing on the music. In life, his career was managed by Col. Tom Parker, who wasted Presley in dozens of well-paying bad movies such as "Fun in Acapulco" and "Clambake."

For many younger listeners, those movies and their parents' oldies radio stations are perhaps their only exposure to Presley.

"I've seen the movies on TV once in a while," said Tiffany Sebring, 14, of Nashville. "They're bad, but he's kind of cute. But that was a long time ago."

In the past few months alone, the estate has tried to reach new listeners with repackaged Presley music:

RCA has issued a four-CD box set of unreleased material, and will release a hits package this fall modeled on last year's successful "The Beatles 1" compilation.

A remix by Dutch artist DJ Junkie XL of Presley's minor 1968 hit "A Little Less Conversation" is rising on the American singles charts after rocketing to No. 1 in Britain.

The Disney children's movie "Lilo & Stitch" features Elvis music, and publishers will produce three books about him this year.

"In some ways, the kitsch he's been associated with for so long is starting to be canceled out through the remastered CDs, and people are focusing on the music, which is great," said Will Clemens, an English professor at the University of Cincinnati who edited a poetry collection last year that focused on Presley, "All Shook Up!"

"He's been someone that people chuckle about for various reasons, but I buy more into the image of him as a master at taking a song to new levels."

It is easy to forget how staid and homogeneous mainstream pop culture was when Presley broke on the scene in 1956 with "Heartbreak Hotel." Popular music at that point was mainly the purview of adult crooners such as Frank Sinatra and Patti Page.

That year alone, Presley also released versions of such hits as "Blue Suede Shoes," "Hound Dog," "Don't Be Cruel" and "Love Me Tender." After one hip-swiveling appearance on "The Milton Berle Show," a critic for the New York Daily News wrote that popular music "has reached its lowest depths in the 'grunt and groin' antics of one Elvis Presley."

Elvis was rebelling against "a hidebound conformity that defined not just the musical roles but, far more important, racial, social and class limitations," writes Presley biographer Peter Guralnick in "Elvis, Then & Now," a magazine published to commemorate the 25th anniversary.

But in that "jumpsuit era," which included some electrifying concerts, Presley was clearly distanced from the main currents of rock 'n' roll, which were seized by groups such as The Beatles and the Rolling Stones in the 1960s.

Rocker David Bowie, when asked about Elvis recently, allowed that he was an "incredibly compelling stage performer," but Bowie said he wasn't a fan.

"There was so little of it that was actually good," he said. "Those first two or three years, and then he lost me completely."

Others give Presley far more credit.

Jeff Tweedy, leader of the rock band Wilco, calls him "a shining beacon."

"Whatever his intentions were, what the world got out of it was, 'I don't have to put up with this. I can do things differently.'"