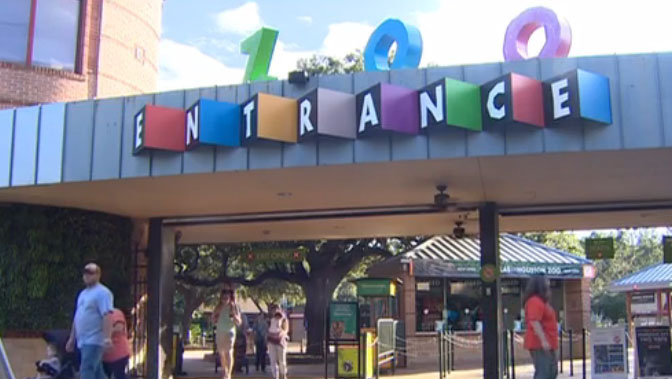 HOUSTON -- Houston Zoo in Texas came under fire recently for signs near its entrance that say the zoo bans guns, leading to the zoo being forced to take the signs down altogether, reports CBS affiliate KHOU.

Even though the zoo is privately owned, a local gun rights attorney pointed out the zoo sits on city-owned land, the station reports, which means it cannot ban guns on its property.

"Why would you want to bring a gun to the zoo? I mean that's kind of crazy," said Damian Manuel, a zoo visitor.

In a statement provided to KHOU, the Houston Zoo said that on Sept. 10 the City of Houston asked the zoo to remove their 30.06 signage, which bans guns from the zoo. They said it was because the land in which the zoo is operated independently on is, in fact, city-owned.

"While the zoo is currently investigating the legal implications of this request as it relates to the new and evolving law, we have complied with the city's request and have removed our 30.06 signs from the entrances," the Houston Zoo said.

KHOU reports that most people they talked to felt uneasy about having people, who are possibly armed, around their children who are trying to enjoy a day at the zoo.

"I probably won't be coming here anymore, but probably bad for them," said Anna Runge, a zoo visitor.

"You just never know these days. I'd feel safer going somewhere where it's restricted but what can you do," said Felica Manuel, another zoo patron.

But some others didn't think it was that big of a deal.

"I hunt and everything, so I'm not going to hurt someone with a gun," said John, a zoo visitor. "If you feel more secure with a gun, carry a gun."

"If you have the right to carry, you should be able to carry," said Chrissy Richey, another zoo visitor. "That's my opinion. Everyone should be safe. If you think carrying a gun makes you safe."

Houston Zoo said in a statement to KHOU that since 1922, the zoo has been a gathering spot for children and families to engage with and learn about animals and the world around them.

Just last year, the zoo welcomed more than 200,000 school children on official field trips and educational programs and is on-track to exceed that number in 2015.

"Effective immediately, the Houston Zoo will not ask anyone who is lawfully permitted to carry a concealed legal hand-gun to stow their weapon in their vehicle while visiting the zoo," the statement read. "We do recognize that this has the potential to confuse or concern our guests and members and we want to emphasize that this will not alter our number-one priority, which is the safety of our guests, employees and animals."