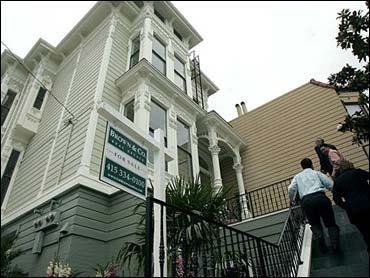 The National Association of Realtors reported that sales of single-family homes and condominiums climbed to a seasonally adjusted annual rate of 7.18 million units last month, the fastest pace on record.

The increase was far above the small 0.2 percent advance that had been expected and was credited to further declines in mortgage rates.

The strength in sales last month was accompanied by further upward pressure on home prices. The median price for an existing home sold last month rose to a record $206,000, up 15.1 percent over the median price a year ago.

That represented the biggest 12-month gain in home sales prices since November 1980 and was certain to add to concerns that the housing industry could be experiencing a speculative bubble similar to the stock market bubble which popped in the spring of 2000.

David Lereah, chief economist at the Realtors, said he agreed with concerns expressed last week by Federal Reserve Chairman Alan Greenspan, who said that while he did not believe there was a national housing bubble certain local markets were exhibiting characteristics of unsustainable price increases.

"Certainly there are some select areas where there could be some froth," Lereah said in releasing the new report.

The new report said that the 7.18 million sales rate in April compared to a revised 6.87 million sales pace in March and was the highest pace on record, surpassing the old mark of 7.02 million sales at an annual rate last June.