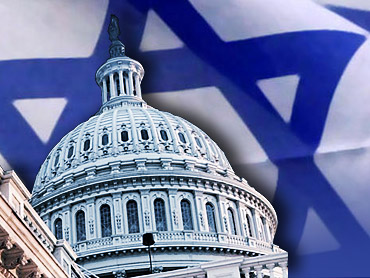 The House, displaying a foreign affairs solidarity lacking on issues like Iraq, voted overwhelmingly Thursday to support Israel in its confrontation with Hezbollah guerrillas.

The resolution, which was passed on a 410-8 vote, also condemns enemies of the Jewish state.

House Republican leader John Boehner cited Israel's "unique relationship" with the United States as a reason for his colleagues to swiftly go on record supporting Israel in the latest flare-up of violence in the Mideast.

Little of the political divisiveness in Congress on other national security issues was evident as lawmakers embraced the Bush administration's position.

So strong was the momentum for the resolution that it was steamrolling efforts by a small group of House members who argued that Congress's pro-Israel stance goes too far.

The nonbinding resolution is similar to one the Senate passed Tuesday. It harshly condemns Israel's enemies and says Syria and Iran should be held accountable for providing Hezbollah with money and missile technology used to attack Israel.

Yet as Republican and Democratic leaders rally behind the measure in rare bipartisan fashion, a handful of lawmakers have quietly expressed reservations that the resolution was too much the result of a powerful lobbying force and attempts to court Jewish voters.

"I'm just sick in the stomach, to put it mildly," said Rep. Nick J. Rahall II, D-W.Va., who is of Lebanese descent.

Rahall joined other Arab-American lawmakers in drafting an alternative resolution that would have omitted language holding Lebanon responsible for Hezbollah's actions and called for restraint from all sides. Rahall said that proposal was "politely swept under the rug," a political reality he and others say reflects the influence Israel has in Congress.

"There's a lot (of lawmakers) that don't feel it's right ... but vote yes, and get it the heck out of here," Rahall said.

Rep. Darrell Issa, R-Calif., who co-sponsored the alternative resolution and also is of Lebanese descent, agreed. The American Israel Public Affairs Committee lobby "throws in language that AIPAC wants. That isn't always the best thing for this body to endorse," Issa said.

Nevertheless, Rahall and Issa said they were considering voting in favor of the resolution. "I want to show support for Israel's right to defend itself," Issa said.

Another lawmaker with Lebanese roots, Rep. Charles Boustany Jr., R-La., said he too planned to vote in favor of the resolution despite holding deep reservations on its language regarding Lebanon. "I think it's a good resolution. But I think it's incomplete," he said.

The lack of momentum for alternative proposals frustrated pro-Arab groups.

"This is the usual problem with any resolution that talks about Israel — there are a lot of closet naysayers up there (in Congress), but they don't want to be a target of the lobby" of Israel, said Eugene H. Bird, president of the Council for the National Interest, a group that harshly condemns Israel's military campaign.

An AIPAC spokeswoman said Congress's overwhelming support for Israel reflects the support of U.S. voters and not any pressure applied by lobbyists. "The American people overwhelming support Israel's war on terrorism and understand that we must stand by our closest ally in this time of crisis," said Jennifer Cannata.

Meanwhile, Israel is predicting its offensive could last for weeks, although international pressure is building for a quick cease-fire. Israel and the United States oppose that move, preferring a more comprehensive agreement. Lebanon's prime minister estimated Wednesday that Israel's military week-old campaign had killed some 300 people and wounded 1,000 more, most of whom were civilians.

The Bush administration said Wednesday it saw no point in leaning directly on Syria to help stop the cross-border warfare between Israel and the Hezbollah guerrillas that Syria supports.

Snow described previous diplomatic sessions with Syria as meetings where U.S. officials drank tea and sat for "five, six, 10 hours listening to polite, but long discourses on greater Syria and at the end of that having gotten nothing."

The administration has no diplomatic ties to Iran, and no contact with Hezbollah, which it considers a terrorist group.

Secretary of State Condoleezza Rice planned to discuss diplomatic efforts to end the violence, and the possibility of international troops to police a peace, over dinner Thursday in New York with United Nations Secretary-General Kofi Annan.

Approximately 2,600 U.S. citizens have been evacuated from Lebanon by the United States since Sunday. Many of the evacuees have been transported to Cyprus, with the State Department arranging chartered flights to the United States. Rice said the State Department will waive requirements that U.S. citizens reimburse the government for evacuation costs.