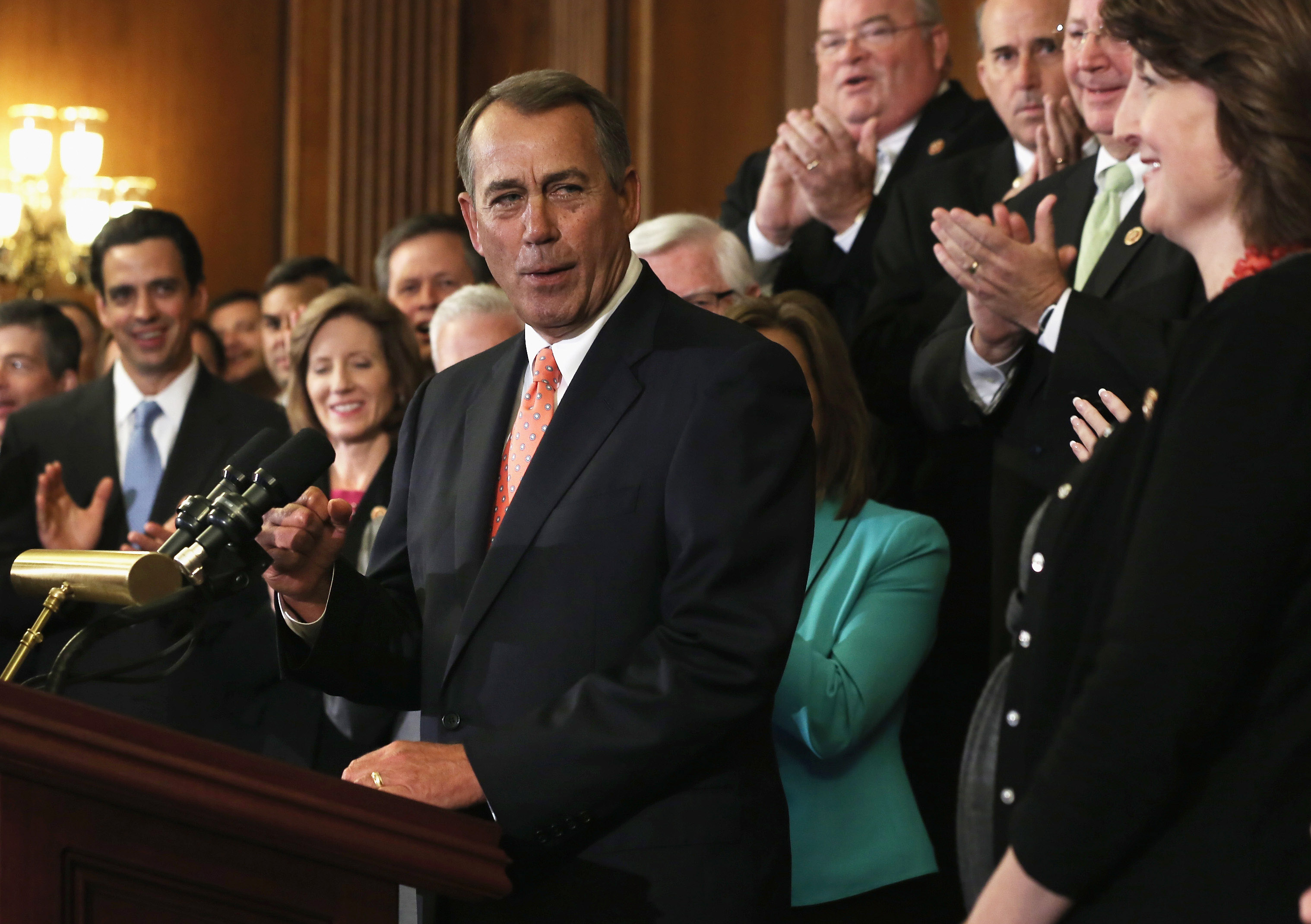 House Republicans advanced a bill on Friday that would continue funding the government at current spending levels for nearly three months but would strip money appropriated to fund Obamacare, following through on months of threats and inviting the prospect of a government shutdown if the Senate, as expected, does not accede to the House's decision before an Oct. 1 deadline.

The bill was passed on a largely party line vote, with 228 Republicans and two Democrats voting in favor of passage. 188 Democrats and one Republican were opposed.

Immediately after the vote concluded, House Speaker John Boehner, R-Ohio, and much of the Republican conference held a rally at the Capitol to celebrate.

Boehner described the vote as a "victory" for the American people, calling Obamacare a "train wreck" that is "hurting our constituents," and pushing the Senate to approve the House bill.

Ahead of the vote, House Appropriations Committee Chairman Hal Rogers, R-Ky., urged his colleagues to support the continuing resolution (CR), which allocates $986 billion to keep the government afloat through December 15.

The CR "is clean, it's short term, it continues reductions in federal discretionary spending, but most importantly...it will prevent a government shutdown," Rogers said.

He warned his colleagues in the House and Senate of the "severe" consequences that would result from a shutdown, saying it would shirk one of the most "basic duties" of congressmen and put America's national security at risk.

Nevertheless, House Republicans' vote on Friday sets up a high-stakes game of chicken with the Democratic Senate, making the possibility of a government shutdown very real if the two chambers cannot iron out their differences over the next 10 days.

House Minority Leader Nancy Pelosi, D-Calif., condemned the resolution and the chamber that passed it in a fiery floor speech before the vote.

"This place is a mess," she said, her voice snapping like a whip. "Let's get our house in order. We are legislators. We have come here to do a job for the American people."

"What is brought to the floor today is without a doubt a measure designed to shut down government," she said. "Its purpose is clear, and if our colleagues on the Republican side deny that then they have no idea of the gravity of the situation."

Senate Majority Leader Harry Reid, D-Nev., said again Thursday that any bill that defunds the health care law is "dead" when it reaches the upper chamber. Next week, the Senate is likely to strip the language pertaining to Obamacare out of the bill and send it back to the House, daring lawmakers in the lower chamber to vote against a funding bill mere days before the law currently funding the government expires.

A passionate contingent of Senate Republicans, led by Sens. Ted Cruz, R-Texas and Mike Lee, R-Utah, have vowed to follow the House's lead and ensure the president's health care law is not funded, but the reality that the Senate is controlled by Democrats makes their task all but impossible.

Despite the forbidding road ahead, Cruz vowed on Thursday to do "everything necessary and anything possible to defund Obamacare," including but not limited to a filibuster on the floor of the Senate to halt any bill that funds the law.

Of course, even in the unlikely event that a spending bill sans Obamacare manages to pass the Senate, President Obama has threatened to veto it, which would require a two-thirds majority to override.

During a speech in Kansas City, Mo. on Friday, President Obama lit into Republicans pushing to defund Obamacare, telling the audience that his opponents are "focused on politics. They're focused on trying to mess with me. They're not focused on you."

He commended the "reasonable Republicans" who are willing to pass a budget and raise the debt ceiling without defunding Obamacare, contrasting them with a "faction on the far right" that is "willing to plunge America into default if we can't defund the Affordable Care Act."

"You don't have to threaten to blow the whole thing up just because you don't get your way," he said, warning of the economic calamity that would result from a shutdown, or worse, from a default on the nation's debt if Congress fails to lift the debt ceiling.

Some Republicans have warned their colleagues that the decision to use the spending bill to defund the health care law is a fool's errand, in light of Mr. Obama's veto pen and Democrats' majority in the Senate. "In the United States Senate, we will not repeal, or defund, Obamacare. We will not. And to think we can is not rational," Sen. John McCain, R-Ariz., told CNN on Thursday. "We don't have 67 Republican votes in the Senate, which would be required to override a presidential veto."

Rep. Peter King, R-N.Y., accused Cruz and his ilk of peddling a "fraud" by insisting that defunding Obamacare is possible. "They know it's not going to win," he said Thursday on CNN. "If he can deliver on this, fine. If he can't, he should keep quiet from now on and we shouldn't listen to him."

That the GOP's efforts to undo Obamacare are building to a climax at the end of September is no coincidence. Several central provisions of the healthcare law will go into effect on October 1, including the law's insurance exchanges, which allow people to comparison shop for health coverage in an online marketplace. Some Republicans worry that if they can't stop the law before it gets off the ground, they'll never have another opportunity.

Complicating that fear, however, is the reality that de-funding the law simply won't do much to stop it. A report from the nonpartisan Congressional Research Service found that, even under a government shutdown, "substantial ACA funding" would likely continue