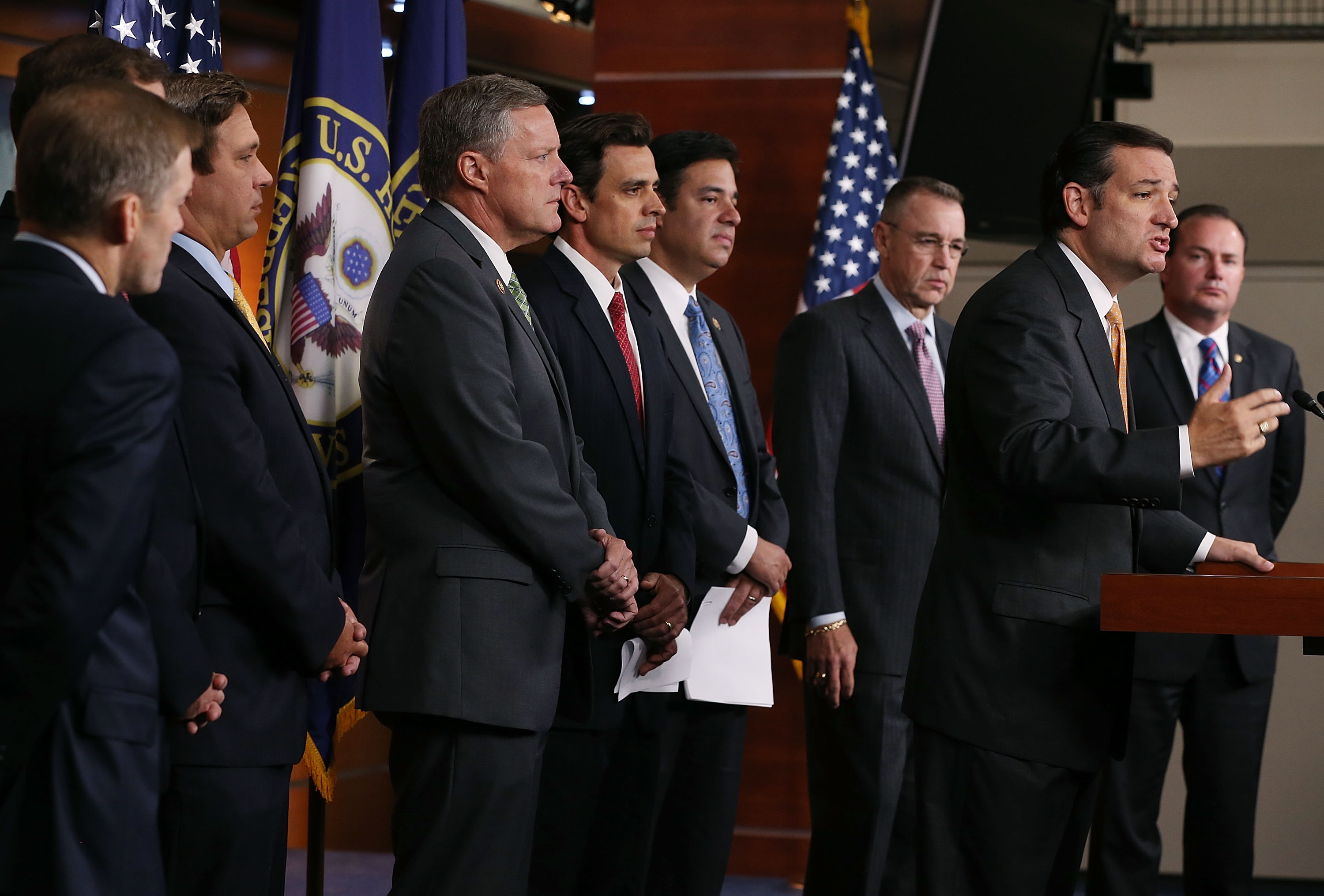 Conservative Sen. Ted Cruz, R-Texas, said Thursday he'll do "everything necessary and anything possible to defund Obamacare," including attempting to filibuster any government funding bill that does not defund the health care law.

In a press conference with conservative House and Senate members, Cruz promised to filibuster such a bill and use "anything else, any procedural means necessary" to stop it.

It's unclear, however, whether Cruz and his conservative allies in the Senate could stop a bill to fund the government.

Reid pointed out that some Republican senators oppose the conservative efforts, led by Cruz and House Republicans, to make government funding contingent on defunding Obamacare. Sen. Richard Burr, R-N.C., for instance, called the conservative plan the "dumbest idea I've ever heard," while Sen. Bob Corker, R-Tenn., slammed the idea on Twitter. If enough Republicans join the Democratic majority in the Senate, they could break Cruz's potential filibuster and pass a bill to keep the government open without defunding the health law.

The White House on Thursday released a formal veto threat against the House Republican bill, saying the administration opposes it "because it advances a narrow ideological agenda that threatens our economy and the interests of the middle class. The Resolution would defund the Affordable Care Act, denying millions of hard-working middle class families the security of affordable health coverage."

If Congress doesn't pass a spending bill by Sept. 30, the government will partially shut down. House Speaker John Boehner, R-Ohio, confirmed Wednesday that the Republican-led House would use the government funding bill as a vehicle to defund Obamacare. Once that bill passes in the House, Boehner said Thursday, the bill will "move over to the Senate where it belongs."

Republicans in the Senate and House have sparred in recent days over which chamber should take responsibility for defunding Obamacare, but the Republicans who joined Cruz on Thursday said they were unified in their efforts. Cruz said he commended Boehner "for listening to the American people and for leading."

Sen. Mike Lee, R-Utah, one of Cruz's allies, said he expects Republicans to stand united against Obamacare and even thinks "maybe a handful of Democrats might consider joining with us as well," given how controversial the Affordable Care Act is.

Lee said he agreed with other leaders that Congress should avoid shutting down the government next month, but he placed the blame on the potential threat to President Obama.

"It certainly is not a good idea to shut down the government to force the implementation of Obamacare," he said. "This law is not worth causing a shutdown over."

The White House has responded that it's entirely up to Congress to pass a funding bill. Boehner, meanwhile, said Thursday that it's "troubling our president has decided to sit out this debate."

After Congress passes a spending bill, it will have to immediately turn to the issue of the debt limit. If the limit isn't raised by around mid-October, the government could risk defaulting on its loans -- which would have far greater economic consequences than a government shutdown. House Republicans are also interested in using this fiscal issue as a point of leverage in their push against Obamacare, promising to vote on a debt limit bill that delays the implementation of Obamacare for a year.

House Minority Leader Nancy Pelosi, D-Calif., said earlier Thursday that once Boehner's ready to consider it, "the votes are there" in the House to pass a debt limit bill, without the Obamacare provision.

"We will provide a huge number of votes for a clean lifting of the debt limit," she said. "This is playing with fire. Legislative arsonists are at work when they start using the debt limit for their own agenda."