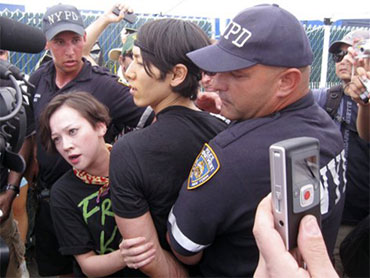 After Joey "Jaws" Chestnut took the "mustard belt" for the fourth year in a row, gulping down a whopping 54 dogs in 10 minutes, his biggest rival, six-time champ Takeru "The Tsunami" Kobayashi, stormed the stage, wrestled with cops, and was arrested on trespassing and other charges.

He wasn't allowed to take part in the contest because he's in a contract dispute with the contest's organizer, Major League Eating. He says on his blog that he wants to compete in events sanctioned by other organizations. But he also told Japan's Kyodo News, " "I really want to compete in the (July Fourth) event."

Noting that it occurred just as the awards ceremony was taking place, Shea remarked, "We had a four-hour celebration. I hate to see that get lost. It's part of the Fourth of July celebration holiday out there. We had a blast. We had four hours of entertainment. ... Then something happened at the very end to kind of sully it. So, that was kind of sad."

Shea said the deal Major League Eating is offering "isn't all that terrible. It's just that we have a league, and our league is sponsored. For instance, you can't do a Nathan's hot dog contest one day and another brand the next. We like to sort of help the sport advance safely and maintain its integrity.

"There aren't that many outside ventures," Shea added. "Major League Eating has had 85 events nationwide in the past year and almost $600,000 in prizes. I don't know where else you go."

Shea said he doesn't know what happened to Kobayashi now. "Literally, it was an NYPD (New York Police Department) issue. That is an area -- there's 40,000, 50,000 people there. … I run the league, and I was being asked for credentials. So, they took him away and they did the right thing, the NYPD. He's got to resolve his issue before I can really comment" on his case, or future with Major League Eating.

"To use the parlance of the sport," Shea concluded, "we have to let this sort of digest and we'll see where we are. ... We'll see how it unfolds."