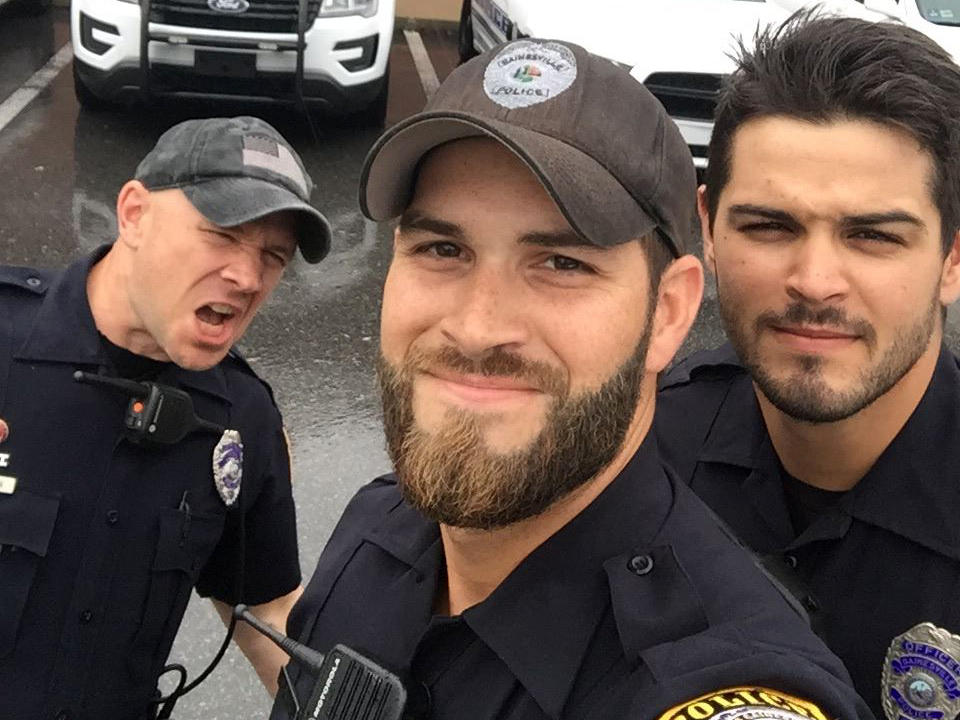 The police department in Gainesville, Florida, is getting widespread attention during their Hurricane Irma recovery efforts -- some of it for a surprising reason. It started when three officers posted a simple photo on the police department's Facebook page.

Officers Nordman, Hamill and Rengering were on the night crew and were getting ready to do some work, the post explains.

Unbeknownst to the officers, the post would be shared over 200,000 times, with many of the comments focusing on the trio's good looks.

"So, looks like my next vacation will be spent in Gainesville rolling through stop signs and driving with a tail light out every evening until I've been pulled over by the entire night shift," one commenter wrote.

After getting thousands of compliments and inquiries about the men, the post was updated to explain Officers Nordman and Hamill are married but Officer Rengering is single.

"We can confirm that Officer Rengering (far right with the amazing hair) IS SINGLE," the post said. "On another note, Officer Rengering is being placed into Cougar Prey Protective Care, similar to the witness protection program for his safety."

The post continued on to set one ground rule: "Please do not call 9-1-1 and request this group respond to your 'incident.'"

The officers also informed the inquiring public that "There WILL be a calendar."

"As for the calendar, we are going to try and do something fairly quickly and funds raised will go to Hurricane Irma recovery here in Florida," the updated post continued.

The department called the comments "hilarious" and said they brightened up their day (also noting, "you've actually made our chief blush with some of them"). The department even responded to a few people's comments on the post.

The police department has been very active on Facebook posting updates on their efforts during Hurricane Irma relief.

After the photo of the "hot cops" went viral, the Gainesville Police Department started sharing more photos of good-looking team members. They even shared a photo of their counterparts in Sarasota, Florida, writing: "If they happen to stir the Interweb like we did earlier...they're going to need rescues themselves!"

CBS News reached out to the Gainesville Police Department for comment, but due to the virality of the post, the department was too inundated with requests for interviews and said that they couldn't respond to all of them.