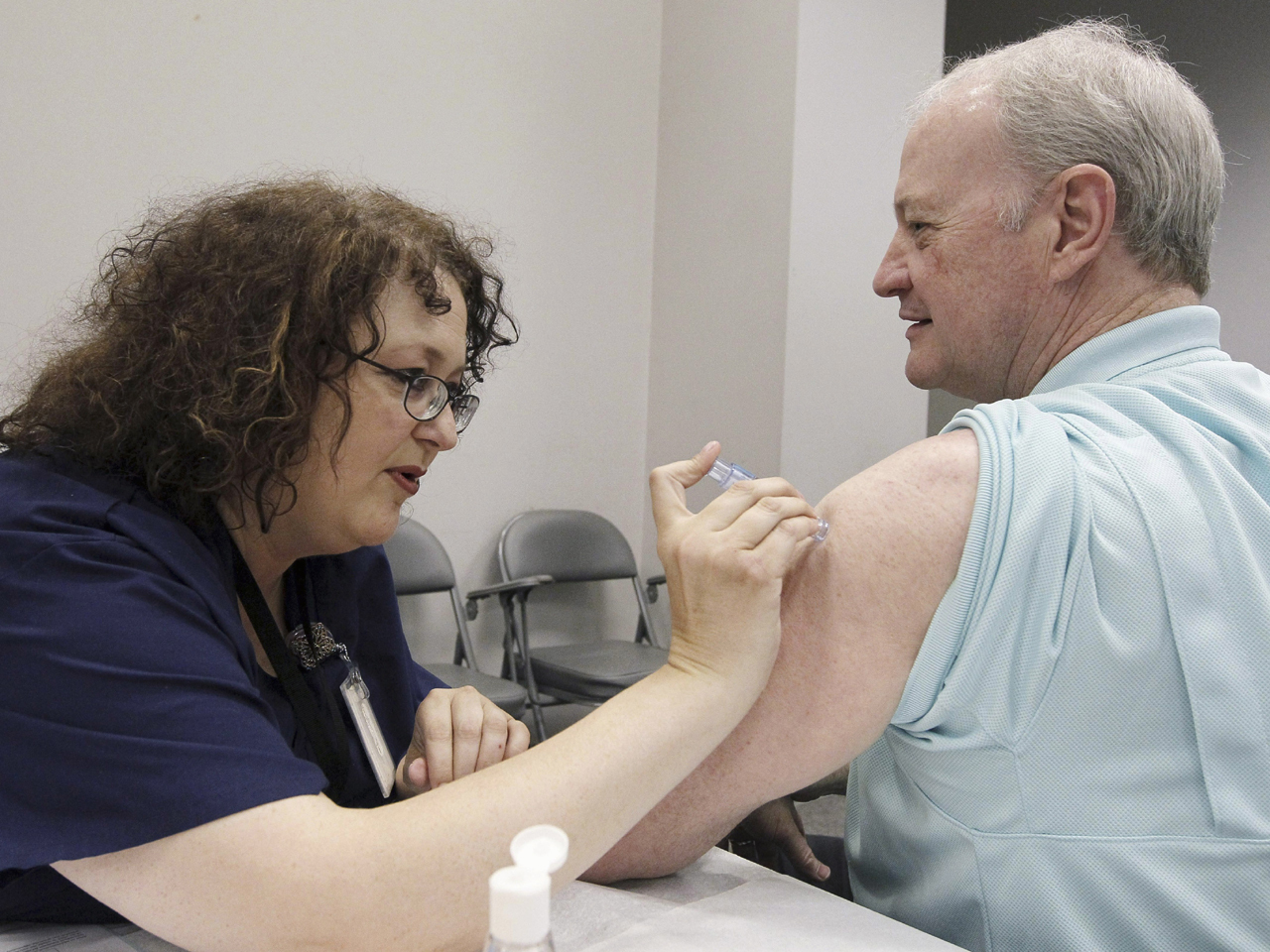 CHICAGO Patients can refuse a flu shot. Should doctors and nurses have that right, too? That is the thorny question surfacing as U.S. hospitals increasingly crack down on employees who won't get flu shots, with some workers losing their jobs over their refusal.

"Where does it say that I am no longer a patient if I'm a nurse," wondered Carrie Calhoun, a longtime critical care nurse in suburban Chicago who was fired last month after she refused a flu shot.

Hospitals' get-tougher measures coincide with an earlier-than-usual flu season hitting harder than in recent mild seasons. Flu is widespread in most states, and at least 20 children have died.

Most doctors and nurses do get flu shots. But in the past two months, at least 15 nurses and other hospital staffers in four states have been fired for refusing, and several others have resigned, according to affected workers, hospital authorities and published reports.

In Rhode Island, one of three states with tough penalties behind a mandatory vaccine policy for health care workers, more than 1,000 workers recently signed a petition opposing the policy, according to a labor union that has filed suit to end the regulation.

Why would people whose job is to protect sick patients refuse a flu shot? The reasons vary: allergies to flu vaccine, which are rare; religious objections; and skepticism about whether vaccinating health workers will prevent flu in patients.

Dr. Carolyn Bridges, associate director for adult immunization at the federal Centers for Disease Control and Prevention, says the strongest evidence is from studies in nursing homes, linking flu vaccination among health care workers with fewer patient deaths from all causes.

"We would all like to see stronger data," she said. But other evidence shows flu vaccination "significantly decreases" flu cases, she said. "It should work the same in a health care worker versus somebody out in the community."

Cancer nurse Joyce Gingerich is among the skeptics and says her decision to avoid the shot is mostly "a personal thing." She's among seven employees at IU Health Goshen Hospital in northern Indiana who were recently fired for refusing flu shots. Gingerich said she gets other vaccinations but thinks it should be a choice. She opposes "the injustice of being forced to put something in my body."

"If you don't want to do it, you shouldn't work in that environment," said Caplan, medical ethics chief at New York University's Langone Medical Center. "Patients should demand that their health care provider gets flu shots — and they should ask them."

For some people, flu causes only mild symptoms. But it can also lead to pneumonia, and there are thousands of hospitalizations and deaths each year. The number of deaths has varied in recent decades from about 3,000 to 49,000.

A survey by CDC researchers found that in 2011, more than 400 U.S. hospitals required flu vaccinations for their employees and 29 hospitals fired unvaccinated employees.

The hospital justified its vaccination policy in an email, citing the CDC's warning that this year's flu outbreak was "expected to be among the worst in a decade" and noted that Illinois has already been hit especially hard. The mandatory vaccine policy "is consistent with our health system's mission to provide the safest environment possible."

The government recommends flu shots for nearly everyone, starting at age 6 months. Vaccination rates among the general public are generally lower than among health care workers.

The highest rate, about 88 percent, was among pharmacists, followed by doctors at 84 percent, and nurses, 82 percent. Fewer than half of nursing assistants and aides are vaccinated, Bridges said.

Some hospitals have achieved 90 percent but many fall short. A government health advisory panel has urged those below 90 percent to consider a mandatory program.

Also, the accreditation body over hospitals requires them to offer flu vaccines to workers, and those failing to do that and improve vaccination rates could lose accreditation.

Starting this year, the government's Centers for Medicare & Medicaid Services is requiring hospitals to report employees' flu vaccination rates as a means to boost the rates, the CDC's Bridges said. Eventually the data will be posted on the agency's "Hospital Compare" website.

Several leading doctor groups support mandatory flu shots for workers. And the American Medical Association in November endorsed mandatory shots for those with direct patient contact in nursing homes; elderly patients are particularly vulnerable to flu-related complications. The American Nurses Association supports mandates if they're adopted at the state level and affect all hospitals, but also says exceptions should be allowed for medical or religious reasons.

Mandates for vaccinating health care workers against other diseases, including measles, mumps and hepatitis, are widely accepted. But some workers have less faith that flu shots work — partly because there are several types of flu virus that often differ each season and manufacturers must reformulate vaccines to try and match the circulating strains.

While not 100 percent effective, this year's vaccine is a good match, the CDC's Bridges said.

Several states have laws or regulations requiring flu vaccination for health care workers but only three — Arkansas, Maine and Rhode Island — spell out penalties for those who refuse, according to Alexandra Stewart, a George Washington University expert in immunization policy and co-author of a study appearing this month in the journal Vaccine.

Rhode Island's regulation, enacted in December, may be the toughest and is being challenged in court by a health workers union. The rule allows exemptions for religious or medical reasons, but requires unvaccinated workers in contact with patients to wear face masks during flu season. Employees who refuse the masks can be fined $100 and may face a complaint or reprimand for unprofessional conduct that could result in losing their professional license.

"We really strongly support the goal of increasing vaccination rates among health care workers and among the population as a whole," but it should be voluntary, said SEIU Healthcare Employees Union spokesman Chas Walker.

Cases involving flu vaccine mandates for health workers have had less success. A 2009 New York state regulation mandating health care worker vaccinations for swine flu and seasonal flu was challenged in court but was later rescinded because of a vaccine shortage. And labor unions have challenged individual hospital mandates enacted without collective bargaining; an appeals court upheld that argument in 2007 in a widely cited case involving Virginia Mason Hospital in Seattle.

Calhoun, the Illinois nurse, says she is unsure of her options.

"Most of the hospitals in my area are all implementing these policies," she said. "This conflict could end the career I have dedicated myself to."

As for the current flu outbreak itself, Dr. William Schaffner, professor at Vanderbilt University and past president of the National Foundation for Infectious Disease, spoke to Anthony Mason and Margaret Brennan on "CBS This Morning" about what we can expect looking forward.

"The flu will be with us for another six weeks," he said. "If you haven't had the flu vaccine, go out and get it, but don't linger. And you may have to shop around a little bit to find it."

Schaffner recommends using the Center for Disease Control's flu vaccine locator website, to find out where you can get vaccinated in your area.

What keeps the director of the CDC up at night
More
Thanks for reading CBS NEWS.
Create your free account or log in
for more features.
View CBS News In
CBS News App Open
Chrome Safari Continue
Be the first to know
Get browser notifications for breaking news, live events, and exclusive reporting.