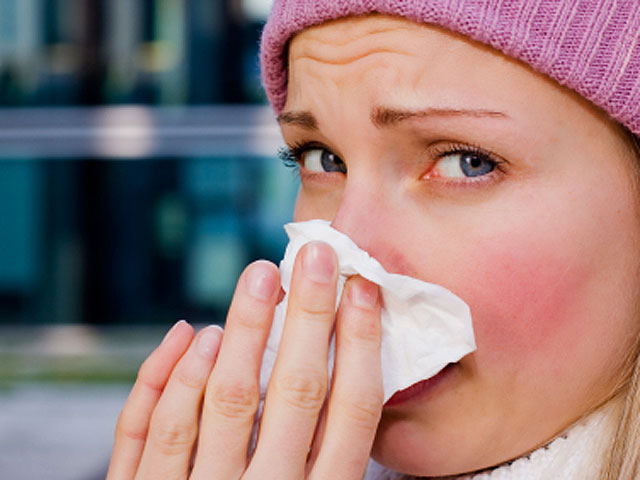 You've got the sniffles, a cough and a fever. While these symptoms may have you fearing the flu, you may also have another common wintertime ailment: a cold.

There's one tell-tale sign that can help you tell which illness you are suffering from, according to experts: how your illness unfolds.

"It can be difficult because cold and flu symptoms can be similar," Dr. Rhonda Medows, the executive vice president and chief medical officer of UnitedHealthcare, explained to CBSNews.com. "The flu is more sudden onset. You may feel perfectly fine in the morning and by the end of the day feel terrible."

Dr. Sherif Mossad, a staff doctor for the infectious diseases division at the Cleveland Clinic, added that subtle differences between cold and flu symptoms may be able to help you determine which one you are suffering from. Though both illnesses may cause a fever, a non-existent or low-grade fever typically signifies a cold, whereas a high-grade fever of 102 to 104 degrees F probably means you have the flu.

Mossad points out that while coughs are typically a prominent sign of the flu, sneezing tends to be a cold symptom. Scratchy throats can be associated with both flu and colds, but runny noses are often associated with colds. This doesn't mean however that a person with the flu can't sneeze or a person with a cold can't cough: It's just less likely.

CBS News medical correspondent Dr. Jon LaPook agrees that there is a lot of overlap between the two ailments.

"In general, the cold is from the neck up -- you have sneezing, runny nose, the cough," LaPook said on CBS This Morning Wednesday. "You can see some cough and sore throat with the flu. But with the flu, you tend to be just really sick -- fever, headache, aches and pains... You're just out of it."

Forty-seven states have reported widespread influenza activity this season, according to the CDC's Jan. 11 FluView report, and Mossad believes it is peaking earlier than usual. While doctors feel that it may be too early to call this influenza season a particularly bad one, they do agree it is stronger than last year's rather light season.

When it comes to treating both illnesses, Medows said most over-the-counter cold remedies will also help relieve some flu symptoms.

The opposite however does not apply for antiviral flu medications, which are available by prescription only and include Tamiflu and Relenza. While there are only three types of viruses that cause the flu, there are thousands of viruses that may cause the cold, Mossad pointed out. Therefore taking an antiviral for your cold won't do much for your sickness. It may, however increase flu resistance in your community.

"If a person who takes the antiviral medication (for a cold) later on gets influenza and still has a small amount of drug in the system, it's not sufficient to treat the flu and can breed resistance," Mossad  said.

Medows also fears that using leftover prescription antivirals from your last flu bout or taking extra pills a friend or family member might have on hand can cause other problems. For one thing, the medication may be expired and ineffective, or broken down to an entirely different compound with unknown effects. Also, you might not have enough medication to complete the full course. Doctors typically prescribe antivirals for five days.

Medows reminds people that they should take the full course of medication that is prescribed by the doctor even if they feel better. Mossad adds that people should get the flu shot because while it is not 100 percent effective at preventing the disease, it may provide some protections -- which is better than nothing, he said. With flu season in swing until March, there is still time to get some protection from the vaccine.

If you've gotten sick with either the flu or cold, don't be afraid to stay at home. With flu, people should not work at least until they do not have a fever. And if they are taking antiviral medication, they should be aware that they can still pass the virus on for several days to a week after they don't have symptoms.

Whether a flu or cold, continue to cover your mouth while coughing or sneezing and wash your hands to help prevent the further spread of illness.

And, if you need help, don't be afraid to ask for it. It's better that you take care of yourself than spread the illness to those who are vulnerable including health care workers, co-workers, and friends and family, especially those who are younger than six months old and those over the age of 65.

"I know this is really difficult, but when you're sick call in reinforcements," Medows said. "I asked my husband to take care of my kids. I don't want them to be sick and me be sick at the same time."