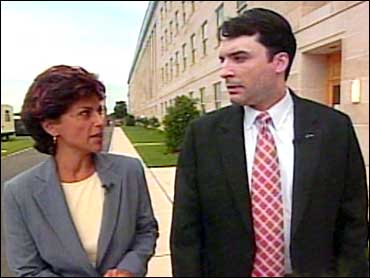 Though reconstruction of the Pentagon is complete, victims of the attack continue the struggle to repair their lives.

For one Navy family, the second year after the attacks has been marked by progress and hope for a much brighter future. National Correspondent Thalia Assuras has their story.

Kevin Shaeffer says, "There were times there when I couldn't see out too far beyond a few months and never really thought that I'd get the strength and stamina back to be a good father."

Blanca Shaeffer notes, "To think that we'd be sitting here holding our brand new baby, in this beautiful house, it's almost too good to be true."

What may seem normal to most people is, for this couple, a dream come true after the anguish of two years ago.

Lt. Kevin Shaeffer was the only survivor in his work area at the Pentagon's Navy Command Center. Twenty-nine of his colleagues, all seated around him, perished that day.

He recalls, "I knew I was blown to the ground. I knew I was on fire. But I knew I had to get out. As I'm crawling, I can ultimately see daylight and then when I saw that, I felt the adrenalin kick in. I raced and dashed across the desks. I stood up and I walked out the blast hole. They've called it since, 'the punch-out hole.' It was really where flight 77 stopped."

Shaeffer's lungs were seared and 42 percent of his body was burned almost to the bone.

Blanca Shaeffer says, "He was barely recognizable. I wanted to press a fast-forward button and find out how it was all going to turn out because at that point, I didn't know."

As she looks at her husband, she says, "I always saw us going home together."

Lt. Kevin Shaeffer says, "That included being able to tie my shoes and tie the knot, or button the top button of my shirt."

Today, at 31, he marvels at his ultimate victory - holding his own child.

And he's working again, at home during the days just after Sophia's birth, and at Ground Zero, one of the places that changed his life forever. Lt. Shaeffer is on the staff of the September 11th Commission, charged with investigating the attacks and preventing others.

He says, "I feel like I'm paying some tribute to those who were lost and killed that day and also respecting and recognizing the families of those lost."

Even as the Shaeffers move forward, they know that their lives will always be connected to those, like them, who survived the attacks, as well as to those who did not.

Blanca Shaeffer says, "That day, it was hard for me to get my arms around how big of a disaster that was and all the people that were lost because I was so focused on Kevin. But certainly, never forget all those people and all the tragedy. But at the same time, don't live in fear. We got on with our lives, but at the same time, we'll never forget."
: