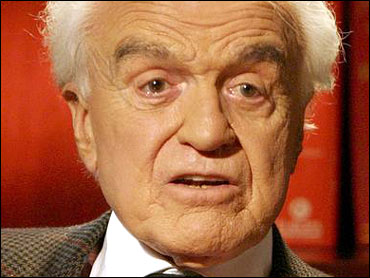 Longtime Hollywood lobbyist Jack Valenti was among the Washington figures whose sex lives were secretly investigated by the FBI in the 1960s.

Valenti, who died in April 2007, was a special assistant and confidant to President Lyndon Johnson in 1964 when J. Edgar Hoover's FBI investigated rumors that he was gay, the Washington Post reported Thursday, based on agency files obtained through the Freedom of Information Act.

The FBI records show that the Republican Party carried out a similar investigation.

Valenti had been married to Johnson's personal secretary for two years at the time. But he was suspected of having a gay relationship with a commercial photographer friend.

When the FBI initially reported its suspicions to Johnson, the president defended his top aide as "all right." He prevented the bureau from getting a sworn affidavit from Valenti or interviewing the photographer. But days later he relented to an investigation.

When the FBI approached the photographer, he swore that Valenti "never engaged in homosexual activities and he does not have these tendencies," according to the records.

Valenti, a Texan who served as a consultant to Vice President Johnson and was in the Dallas motorcade the day President John F. Kennedy was assassinated, became Johnson's special assistant immediately after he was sworn in as president.

He served Johnson until taking over as chief of the Motion Picture Association of America in 1966. He retired in 2004.