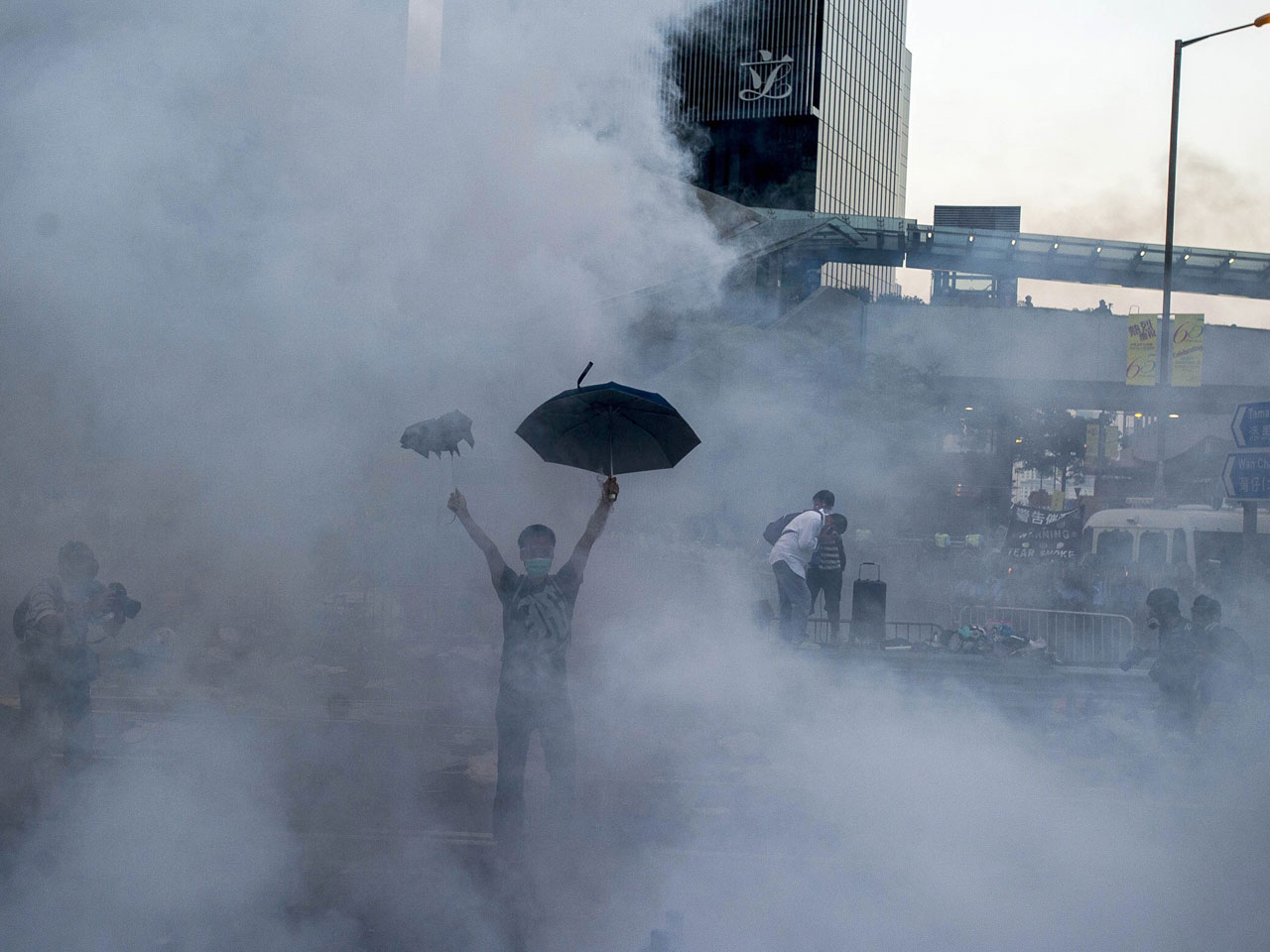 "I hope the public will keep calm. Don't be misled by the rumors. Police will strive to maintain social order, including ensuring smooth traffic and ensuring the public safety," said the Beijing-backed Leung, who is deeply unpopular. He added, "When they carry out their duties, they will use their maximum discretion."

As sit-ins spread to other areas of Hong Kong in the strongest challenge yet to Beijing's decision to limit democratic reforms for the semi-autonomous city, Leung urged everyone to go home and avoid causing trouble.

"We don't want Hong Kong to be messy," Leung said as he read a statement aloud early Monday on TV.

After spending hours holding protesters at bay, police lobbed canisters of tear gas into the crowd on Sunday evening. The searing fumes sent demonstrators fleeing, though many came right back to continue their protest. The government said 26 people were taken to hospitals; some carried away on stretchers.

As the protest dragged past midnight, police began pushing the crowds back with their vans. Meanwhile, some protesters began occupying other downtown areas.

Some protesters pulled back, fearing police might move more aggressively to end the protests, which began with sit-ins over a week earlier by students calling for Beijing to grant genuine democratic reforms to the former British colony.

"It was very cruel for the police to use such harsh violence on protesters who had been completely peaceful," said demonstrator Cecily Lui, a 30-year-old clerk.

When China took control of Hong Kong it agreed to a policy of "one country, two systems" that allowed the city a high degree of control over its own affairs and keep civil liberties unseen on the mainland. It also promised the city's leader would eventually be chosen through "universal suffrage."

Hong Kong's residents have long felt their city stood apart from mainland China thanks to its guaranteed civil liberties and separate legal and financial systems. Recent moves by Beijing to tighten its grip on the territory have brought on the most vehement protests since China took control of Hong Kong from the British in 1997.

The protests, rare scenes of disorder for this Asian financial hub, are highlighting the authorities' inability to assuage public discontent over Beijing's rejection last month of open nominations for candidates under proposed guidelines for the first-ever elections for Hong Kong's leader, promised for 2017.

Beijing's insistence on using a committee to screen candidates on the basis of their patriotism to China - similar to the one that currently hand-picks Hong Kong's leaders - has stoked fears among pro-democracy groups that Hong Kong will never get genuine democracy.

The pastor at a church up the road from the biggest protests said he was keeping his church open and was "prepared for the worst," with doctors and nurses standing by.

"We will be open all night," said the Rev. Francis Lau of the Chinese Methodist Church. "One man, he felt very sorry about what happened today, he leant on my shoulder and cried."

Students and activists have been camped out since late Friday on streets outside the government complex, near Hong Kong's financial district. The sit-ins have led to confrontations on surrounding streets between police and others blocked from entering the protest zone.

In a statement issued after midnight, the Hong Kong police said rumors that they had used rubber bullets to try to disperse protesters, and would impose a midnight curfew, were "totally untrue."

Although students started the rally, leaders of the broader Occupy Central civil disobedience movement joined them, saying they wanted to kick-start a long-threatened mass sit-in demanding that an election for Hong Kong's top leader be held without Beijing's interference.

University and college students say they will continue to boycott classes until officials meet their demands, which include reform of Hong Kong's legislature and withdrawing the proposal to screen the election candidates.

Thousands of people breached a police cordon Sunday as they tried to join the sit-in, spilling out onto a busy highway and bringing traffic to a standstill.

After police brought out the tear gas, protesters chanted "Shame on C.Y. Leung."

Hong Kong "has changed to a new era so the people have to be awakened. It's no longer the old Hong Kong," said one protester, W.T. Chung, 46, yelling at police officers after they used the tear gas.

Police have arrested dozens of people. They also took away several pro-democracy legislators who were among the demonstrators.

Among the dozens arrested was 17-year-old Joshua Wong, who was dragged away soon after he led a group of students storming the government complex. He was released Sunday evening.