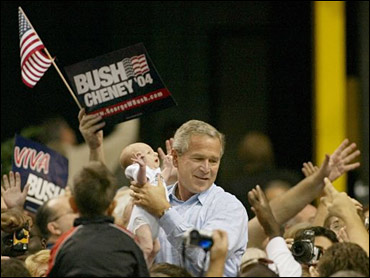 President Bush accused Democratic challenger Sen. John Kerry on Saturday of bowing to the "shifting sands of political convenience" when it comes to the war on terror. The Democrat stuck to domestic issues, blaming Mr. Bush for a shortage of

"Millions of Americans won't get their flu shots, including seniors and children," Kerry said while also blasting Mr. Bush on joblessness. "We've got people standing in line for hours on end, some of them in their 70s and 80s, hoping to be among the lucky ones to get it."

With new polls showing the race as tight as ever, both candidates found new ways to go negative while rallying supporters in the campaign's two most crucial states. The incumbent was in Florida, his challenger in Ohio. The election is Nov. 2.

Two polls out Saturday, Axelrod continues, have the race staistically dead even: One, by Time magazine, puts Kerry up by two points and the other, by Newsweek, have Mr. Bush leading by two points.

CBS News Correspondent Mark Knoller, who's covering the Bush campaign, says the president's camp deems Florida as "indispensable to his bid for re-election. There is no realistic scenario in which Mr. bush can win a second term without florida's 27 electoral votes."

The president and Kerry also tailored their appeals on Saturday. The Democrat, a Catholic, was going to Mass and picking up a hunting license - a pitch to Ohio's socially conservative Democrats motivated by values issues and gun rights.

Mr. Bush appealed to Florida's large Jewish population by signing a bill requiring the State Department to document attacks on Jews around the world. The department had opposed the measure, calling it unnecessary.

Amid strobe lights and swirling smoke, Mr. Bush's campaign bus drove into a darkened sports arena in Sunrise, Fla., outside Ft. Lauderdale, depositing the president on stage with red-white-and-blue lights flickering across a crowd of 10,000 supporters. He noted that a year ago Sunday Kerry voted against an $87 billion bill for military reconstruction efforts in Iraq and Afghanistan.

"Senator Kerry apparently decided supporting the troops even while they were in harm's way was not as important as shoring up his own political position," Mr. Bush said.

Kerry, a four-term senator from Massachusetts, voted against the bill to protest Mr. Bush's policies on Iraq during the Democratic nomination fight. Kerry was trying to overtake anti-war candidate Howard Dean.

To a chorus of anti-Kerry boos, Mr. Bush accused his rival of playing politics with war: "At a time of great threat to our country, at a time of great challenge to the world, the commander in chief must stand on principle, not the shifting sands of political convenience."

Kerry's campaign noted that a year ago, Defense Secretary Donald Rumsfeld warned in a memo to the White House of problems in Iraq. "The fact that George Bush is continuing to rely on these same desperate attacks tells a lot about how a second Bush term would just be more of the same," Kerry spokesman Phil Singer said.

In Ohio, Kerry accused Mr. Bush of missing signs that a flu vaccine shortage was imminent. The attack fit into a broader campaign theme - that on Iraq, the economy and many other matters, Mr. Bush is disconnected from problems facing Americans.

Kerry said, "What's happening with the flu vaccine is really an example of everything this administration does - deny it, pretend it's not there, and then try to hid it when it comes out and act surprised." His campaign released a television ad that says Mr. Bush "failed to fix the problem."

A Bush spokesman accused Kerry of hypocrisy for criticizing the president after voting against a measure that would protect vaccine manufactures from punitive damages.

Kerry hopes the issue cuts against Mr. Bush among women and the elderly, especially in Florida, where running mate John Edwards campaigned Saturday. Kerry himself was due in the state Sunday and Monday.

Mr. Bush was campaigning by bus and plane throughout Florida. In addition to Sunrise, he was appearing at rallies in West Palm Beach and the Daytona International Speedway Saturday, each time introduced by his brother, Florida Gov. Jeb Bush. All three stops were in counties Al Gore won.
Four years ago, Mr. Bush won Florida by 537 votes after the Supreme Court stopped a disputed recount. In his bid for the winning margin of 270 electoral votes, Kerry needs to win at least one state that Mr. Bush claimed in 2000.

Florida is among the handful of states both sides consider still in play, and the one offering the largest electoral prize.

The race in Ohio is just as close. Mr. Bush won the state with relative ease four years ago, but Ohio has lost 237,000 jobs since he took office.

At a town hall meeting in Xenia, Ohio, Kerry vowed to tackle the problem of the decline of manufacturing jobs, a national trend hitting Ohio particularly hard.

"We're losing good jobs," Kerry said. "Consumer confidence in America is plunging downwards as people have more and more doubts about the economy. Doubts are one of the things a president is elected to deal with."

Florida's lashing by four major hurricanes has complicated campaigning and polling. Some polls show Mr. Bush ahead and others indicate a close race.

A survey of likely Florida voters released Saturday gives both Mr. Bush and Kerry 48 percent of the vote in a hypothetical ballot test.

The poll, done by The Washington Post, Univision and the Tomas Rivera Policy Institute, shows Independent Ralph Nader, whose votes probably cost Al Gore the state, pulling one percent, slightly below his statewide percentage four years ago. Mr. Bush and Kerry were also tied among registered votes, at 47 percent each, with Nader at one percent, the Post says in its Saturday editions.

The Post also points to what it calls "one of the most important subplots in Florida" - namely, Kerry's battler to make inroads against the president with the state's increasingly diverse Hispanic population.

A separate poll conducted by The Post, Univision and the Tomas Rivera Policy Institute (TRPI) shows Bush holding a significant lead among Hispanic voters in Florida.

Mr. Bush has an overwhelming lead among Florida's Cuban Americans, who dominate the state's Hispanic population. But among the faster-growing non-Cuban Hispanic groups in Florida, the race is a virtual dead heat. The poll of Florida Latinos found Mr. Bush the favorite among older and foreign-born Hispanics while U.S.-born Hispanics split their vote. Nearly one in five Florida residents is of Hispanic descent.

The National Annenberg Election Survey found that 62 percent in the military sample said the administration didn't send an adequate number of troops to Iraq. And 59 percent said too much of a burden has been put on the National Guard and reserves when regular forces should have been expanded instead.

Family members were more critical of the administration's Iraq policy than those on active duty.

A poll of military members and their families released Friday by Annenberg shows they trust Mr. Bush more to be commander in chief than Kerry, by a 69-24 margin.

Still another survey made public Saturday, by The Associated Press and Ispos, pegs the Iraq war and terrorism as the issues at the top of the list of Americans' concerns with Election Day just around the corner.