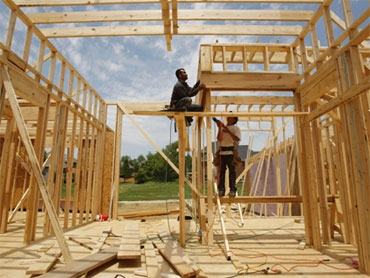 Homebuilders' confidence in the housing market has sunk to the lowest level in more than a year, fresh evidence that the U.S. economic recovery is slowing.

The National Association of Home Builders said Monday its seasonally adjusted housing market index fell to 14 in July. It was the lowest level since March 2009. June's index level was revised downward to 16.

Readings below 50 indicate negative sentiment about the market. The last time the index was above 50 was in April 2006.

Builders are reporting a sharp drop in the number of buyers looking for new homes now that federal tax credits of up to $8,000 have expired.

But Mike Larson, real estate and interest rate analyst at Weiss Research, said what's really weighing on the housing industry is a dismal labor market that has slowed the broader recovery.

"With growth slumping again, and unemployment hovering near the double digits, we simply don't have the necessary ingredients for a sustainable recovery in housing," Larson said.

New home sales in May dropped 33 percent to the slowest pace in the 47 years records have been kept. The number of buyers who signed contracts to purchase previously occupied homes tumbled 30 percent in May. The drop-off came immediately after the tax incentives to sign a contract on a home ended on April 30.

"The pause in sales following expiration of the home buyer tax credits is turning out to be longer than anticipated due to the sluggish pace of improvement in the rest of the economy," said David Crowe, the trade group's top economist.

Still, the trade group's latest survey of 502 residential builders nationwide suggests the market will remain sluggish for the rest of the year. The index is broken into three separate readings. Its index measuring expectations for the next six months fell one point to 21. Current sales conditions fell two points to 15 and foot traffic from prospective buyers sank to 10.

Builders have sharply scaled back construction in the face of a severe housing market bust. The number of new homes up for sale in May fell to 213,000, the lowest level in nearly 40 years. But due to the sluggish pace of sales, it would still take 8.5 months to exhaust that supply, above a healthy level of about six months.

Each new home built creates, on average, the equivalent of three jobs for a year and generates about $90,000 in taxes paid to local and federal authorities, according to the trade group. The impact is felt across multiple industries, from makers of faucets and dishwashers to lumber yards.