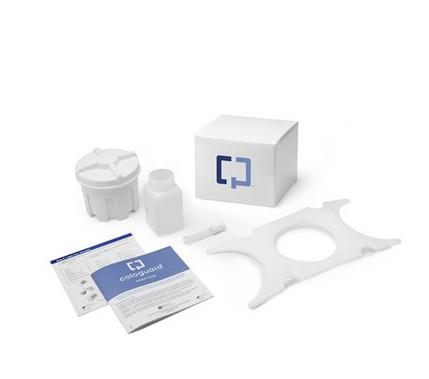 Colon cancer is the second leading cause of cancer deaths in the United States, but it doesn't have to be. Now, a new, non-invasive home test for colon cancer will make screening more accessible to the millions of people who have avoided it.

Colonoscopy is recommended once every 10 years for adults over the age of 50. However, about 23 million adults in that age group don't get screened at all, and a reason for some may be that the test is too invasive.

The home test, called Cologuard, is the first to look for cancer-related DNA in stool.

"It's a great new option I think," CBS News chief medical correspondent Dr. Jon LaPook said when the promising research on the test came in last spring. But LaPook, who is also a gastroenterologist at NYU Langone Medical Center in New York, added that "it's not yet perfect."

Deciding whether to get the new at-home test is a complex choice.

On one hand, the test could greatly boost screening for a deadly disease that too few people get checked for now.

On the other hand, it could lure people away from colonoscopies and other tests that, unlike the new one, have been shown to save lives.

David Smith, 67, a retired teacher from Northfield, Minnesota, shows the test's potential. He has never been screened for colon cancer and his doctor ran through the options, including a barium enema or a scope exam.

"He pulled out one of those really colorful brochures they have for all those procedures," Smith said, but he had suffered an infection from a prostate biopsy years ago and didn't want another invasive test. When the doctor mentioned the new DNA test, "I said, well, sign me up."

The test was approved by the Food and Drug Administration in August. It is available by prescription at the Mayo Clinic in Minnesota, where it was developed, and through other medical providers. Cologuard's website has more information on how to obtain the test.

The Cologuard test is sold by Exact Sciences Corp. of Madison, Wisconsin. Mayo Clinic and one of its doctors get royalties from the test.

Many current stool tests look for blood that could suggest a tumor. Cologuard does this plus detects DNA that could be a sign of cancer or precancerous growths called polyps. People send a stool sample to a lab where it is tested.

If the test is positive, the next step is a diagnostic colonoscopy. A thin tube with a tiny camera is passed through the large intestine and growths can be removed and checked for cancer. When this is done for screening and precancerous polyps are removed, it can prevent cancer, not just detect it. It requires drinking laxatives the day before to clean out the bowel.

A sigmoidoscopy is a similar scope exam but only looks at the lower portion of the bowel and does not require full sedation.

ADVERTISED BUT NOT ENDORSED

The best measure of a screening test's worth is whether it lowers the risk of death from a disease, and it's too soon to know whether Cologuard will. The U.S. Preventive Services Task Force, which sets widely followed screening advice, has not yet considered it.

For healthy adults age 50 to 75 at average risk for colon cancer, the task force backs three methods: annual stool blood tests, a sigmoidoscopy every five years plus stool tests every three years, or a colonoscopy once a decade.

Cologuard was not directly tested against colonoscopy for screening but now is being marketed as an alternative. A large study compared Cologuard to one of the older stool blood tests and found it detected 92 percent of colorectal cancers and 42 percent of advanced precancerous growths compared to 74 percent of cancers and 24 percent of growths for the older test.

"Colonoscopy is the gold standard," but the new test "is pretty darn good" at detecting cancer, though it misses more pre-cancers than previous studies of colonoscopy show, said Dr. Harold `Hal' Sox, a Dartmouth professor who formerly headed the preventive services task force.

Cologuard also had a downside - more false alarms. It correctly ruled out colon cancer only 87 percent of the time versus 95 percent for the older test.

"One could look at it and say that's a glass half empty, half full," Kramer said. It leads 13 percent to have follow-up colonoscopies they really didn't need - because they didn't have cancer. Yet if the alternative is to screen everyone with a colonoscopy in the first place, Cologuard could avoid 87 percent of them.

Cologuard costs $599 versus about $25 for current stool blood tests, and "you don't know whether you need to take it every year - intervals have not been tested," Kramer said.

If you have the DNA test every three years, it would be $1,800 - about the cost of a colonoscopy, which is good for 10 years unless polyps are found, he said.

Medicare covers the new test but private insurers aren't covering it yet.

Many cancer experts say the best screening test is the one that people are willing to get.

Colorectal cancer is the second leading cause of cancer deaths in the United States and the fourth worldwide. More than 143,000 new cases and 52,000 deaths from the disease are expected this year in the U.S. alone. Only about 60 percent of people recommended to get screened do so now.

Dr. Kenneth Lin, a Georgetown University family physician and former staff doctor for the preventive services task force, said, "You'd rather have more options than not, but I don't think there's enough data to declare this test superior to any other test" because of the false positives and lack of proof that it will save lives, Lin said. "It definitely has some promise."