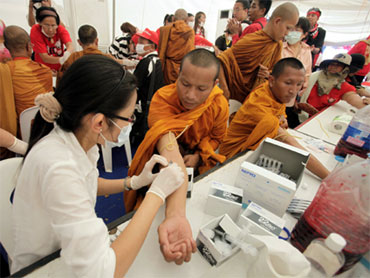 Many of us love a good, home-cooked meal, but rarely do we have time to prepare it ourselves. The editors at Food and Wine magazine compiled their favorite, quick 30-minute recipes in a new cookbook, titled "Fast" and published by American Express Publishing.

The magazine's Special Projects Editor Kevin Patricio proves that these are easy, and presents a three-course meal for four, using a $30 budget for the Saturday Early Show Chef on a Shoestring challenge.

The following is his menu; just click on the red links to get the recipes:

The soft-shell crabs are the appetizers. The beauty of soft-shells is that because they have no hard shell, the entire crab -- legs, claws, shells -- can be consumed. The problem for soft-shell crab lovers is that the season ends in September. In the United States, the blue crab (found along the Atlantic and Gulf Coasts) is the species most commonly eaten in its soft-shell state.

Bulgar Wheat is best known as the main ingredient in tabbouleh salad, but it is also used in pilard, soup, baked goods, stuffing, and casseroles. Bulgar Wheat are wheat kernels that have been steamed, dried and crushed. It has a tender, chewy texture, and is light brown in color. If bulgur wheat is not available and you do not want to make your own, cracked wheat can be used in most recipes.

Fennel is being used in the chicken salad. Fennel is an aromatic plant from the carrot family. Florence fennel, also called "finocchio," is eaten raw and in salads. Common fennel is the plant that produces fennel seeds.

The following are some of the "Food and Wine" recipes:

Method:
Season the crabs with salt and pepper; dredge the crabs in the flour, tapping off any excess. In a large skillet, heat the canola oil until oil begins to shimmer. Add the crabs to the skillet and cook over moderately high heat until golden, about 3 minutes per side. When the crabs are about finished, add one tablespoon of butter and baste the crabs with oil and butter mixture to coat. Remove from heat.

In a separate skillet over medium heat, heat 1 tablespoon of olive oil. Add the arugula and season with salt. Remove from the heat quickly and toss to wilt the arugula. Place one slice of ham on each salad plate. Then cut the crabs in half. Place half a crab on each plate on top of the ham. Then mound some arugula on the side. Serve with lemon wedges and garnish with remaining tablespoon of olive oil.

For cleaning soft-shell crabs:
To clean crabs, remove spongy substance (gills) that lies under the tapering points on either side of back shell. Place crab on back and remove the small pieces at lower part of shell that terminates in a point. With scissors, cut off the mouth, eyes and feelers. Wash the crab thoroughly, even under the spikes, drain well.

Method:
Preheat the oven to 500 degrees. In a heatproof bowl, cover the bulgur with boiling water. Cover the bowl with a plate and let stand until the water has been absorbed and the bulgur is tender, about 30 minutes.

Meanwhile, on a rimmed baking sheet, coat the chicken breasts with 1 tablespoon of the olive oil. Season with salt and pepper. Roast for 15 minutes, until golden; let cool. Discard the skin. Slice the chicken on a bias 1/4 inch thick.

In a small bowl, whisk the orange juice with the basil, lemon juice, scallions and the remaining 1/4 cup of olive oil; season the vinaigrette with salt and pepper.

Method:
Preheat the oven to 350 degrees and position racks in the middle and lower thirds of the oven. In a medium bowl, whisk the flour with the baking soda and salt.

In a large bowl, using a handheld electric mixer, beat the butter at medium speed until smooth and creamy. Add the brown sugar and granulated sugar and beat at medium speed until light and fluffy. Add the eggs and vanilla and beat until smooth. At low speed, beat in the dry ingredients until thoroughly incorporated. Using a wooden spoon, stir in the chocolate chips and toasted nuts until they are evenly distributed.

The cookies can be stored in an airtight container between sheets of wax paper for up to 2 days.