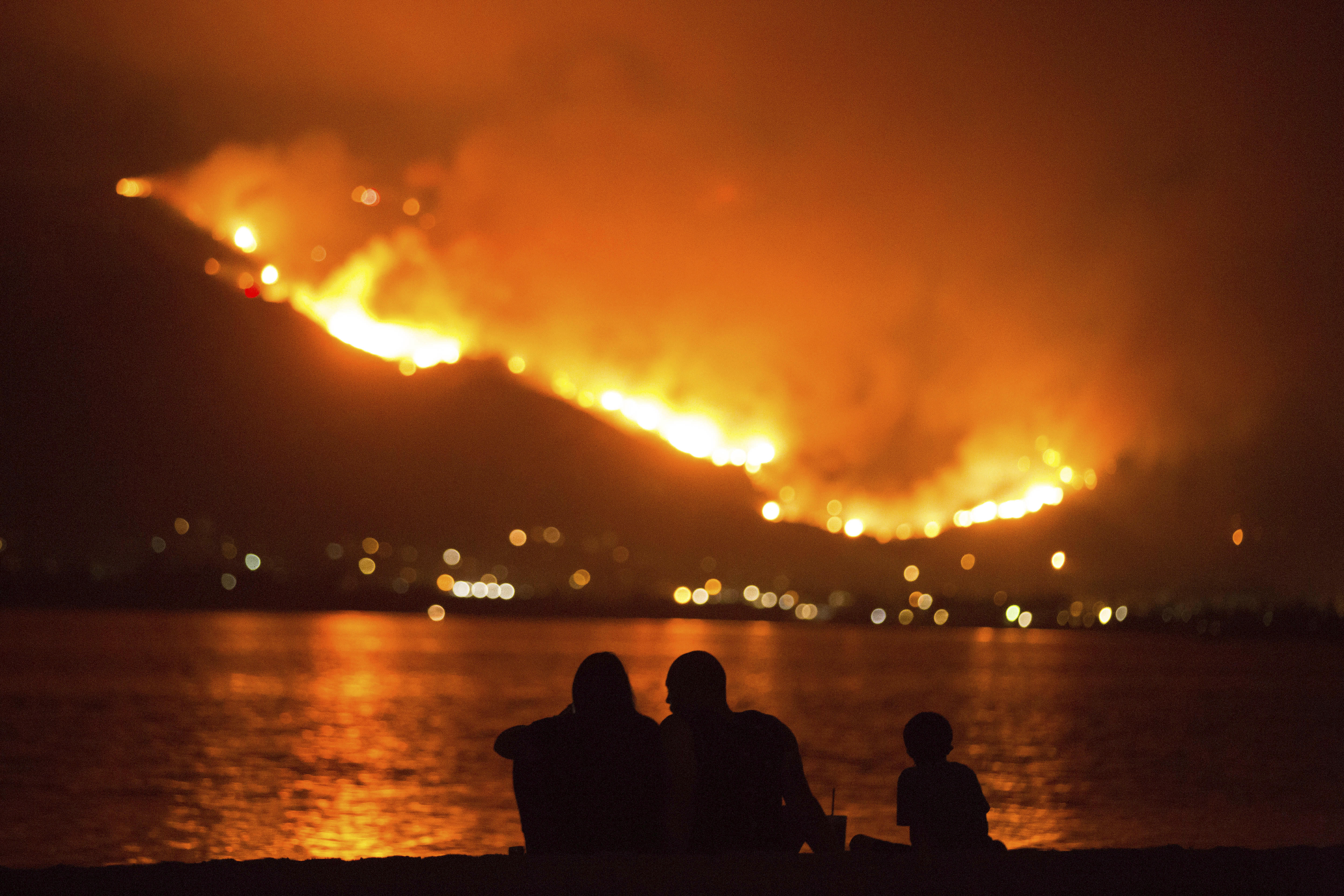 LAKE ELSINORE, Calif. -- California's Holy Fire grew to 33.5 square miles by Saturday, and as of late morning, it was 29 percent contained, officials said.

It is one of nearly 20 blazes across California, which is seeing earlier, longer and more destructive wildfire seasons because of drought, warmer weather attributed to climate change and home construction deeper into forests.

Firefighters fought to spare homes on Friday from the growing Southern California forest fire, a day after flames came perilously close to neighborhoods and destroyed one house. Gov. Jerry Brown declared a state of emergency for Orange and Riverside counties as the fire carved its way along ridges in Cleveland National Forest south of Los Angeles.

Some hillsides were allowed to burn under the watchful eyes of firefighters as a way to reduce fuel and make it harder for flames to jump roadways into communities if winds pick up again. Aircraft dropped fire retardant on flames and homes as people ignoring evacuation orders used garden hoses to spray down their properties when the blaze flared Thursday evening, propelled by 20-mph gusts.

Shannon Hicks, 59, defied an evacuation order and watched in awe as firefighters faced down a storm of flames that descended toward her street in the city of Lake Elsinore.

"It looked like a tornado. The flames were just twirling and twirling," she said. "I thought, 'There's no way they're saving my house.' But somehow they did."

One resident wasn't so lucky. Standing in the ashes of his burned home on Friday, Dan Pritchett told KNBC-TV that he and his brother stayed until a wall of flames roared near. "I turned to him and said, 'Let's go,'" Pritchett said. "(There were) 100-foot flames right on the crest of the hill, right in front of me."

Along with Pritchett's home, the Holy Fire burned 12 cabins at its origin in the community of Holy Jim on Monday.

In the northern part of the state, firefighters aided by cooler weather have made good progress against a blaze burning for nearly a month near Yosemite National Park. The park was set to reopen Tuesday after a two-week closure, park spokesman Scott Gediman said Friday. Visitors should expect limited hours and visitor services next week as the park returns to normal, he said.

The blaze didn't reach the heart of the park and instead burned in remote areas, making roads inaccessible and polluting the area with smoke. But the closure dealt a financial blow to Yosemite at the height of the summer season and caused upheaval for thousands of tourists whose summer trips were canceled.

Officials also gained more control over two other major Northern California wildfires, including the largest in recorded state history, even as evacuations were ordered for communities near a new fire in the Fall River Mills area, about 70 miles northeast of Redding.

About 350 residents were under mandatory evacuation orders because of the Hat Fire, which began Thursday near a highway.

In the south, Cleveland National Forest officials tweeted that the flames outside Los Angeles were growing as fast as crews can build lines to contain them. "We continue to actively engage, but cannot get ahead of the fire," the statement said.

Teresita Reyes was among some 20,000 people forced to evacuate, saying she was attending a wedding Wednesday when she received the order. The 51-year-old state health inspector congratulated the couple and left quietly for her house in the city of Lake Elsinore to grab important documents.

Since then, Reyes and her husband have been staying at a hotel with a faulty air conditioner while their three dogs and cat are holed up at the family's plumbing business.

"It is nerve-wracking and unreal," she said. "We were on pins and needles for a little while there because it got real close."

The fire was deliberately set. A resident of Holy Jim has been charged with arson and other crimes and appeared in a jailhouse courtroom Friday. Forrest Clark, 51, made several outbursts, claiming his life was being threatened. A court commissioner postponed his arraignment until Aug. 17 and ordered bail to remain at $1 million. "May I pay for that immediately?" asked Clark, who could face life in prison if convicted.

Michael Milligan, chief of the Holy Jim Volunteer Fire Department, has told the Orange County Register that Clark had a decade-long feud with neighbors and had sent him threatening emails last week, including one that said, "This place will burn."

Crews turned a corner in their battle against Northern California's Mendocino Complex Fire, the largest-ever in recorded state history, getting it 60 percent contained. The fire more than 100 miles north of Sacramento has destroyed more than 100 homes and blackened an area about the size of Los Angeles.

Near the Northern California city of Redding, the year's deadliest fire was nearly half-surrounded and was burning into remote and rugged forest land. The Carr Fire has burned more than 1,000 homes.

The fires all grew explosively in the past two weeks as winds whipped the flames through forest and rural areas full of timber and brush that is bone-dry from years of drought and a summer of record-breaking heat.

Air quality has been another problem. A smoky haze stretches from the foothills of the Sierra Nevada range to Sacramento and hovers over the San Francisco Bay Area, with most major population centers in between enduring air quality that's considered dangerous for many residents.

The size of the fires brings new horror as the state still reels from enormous blazes last year and has yet to hit its most dangerous months historically.