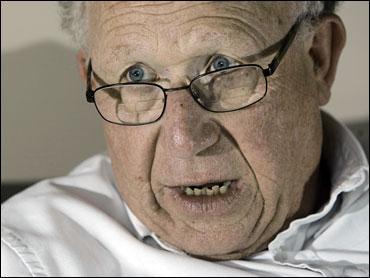 The letter brought a bittersweet end to Sol Factor's 17-year search for his mother, a Holocaust survivor who disappeared in the aftermath of World War II:

"We regret to inform you that we located the above mentioned person, but she would not like to be contacted by the inquirer," reads the message from Magen David Adom, the Israeli counterpart of the American Red Cross.

Factor, who had found clues to his past with the help of the Red Cross and a vast archive of Nazi records, knows only that his mother, now 83 years old, is living in Israel.

"Of course I'm disappointed because one likes searches like this to end with happy reunions," he said in an interview in his home in this Cleveland suburb.

"There's a sense of actual relief too, because now some of the mystery has been solved," he said.

Factor, 60, was born Meier Pollak in Munich, Germany, in 1946 to Romanian-born Rosa Pollak, also spelled Polak. He has found documents showing that Rosa Pollak and her newborn son were discharged from a maternity hospital on July 9, 1946, and soon after went to a United Nations-sponsored hospital for refugees in Munich. Within days they became separated.

Factor was adopted in 1950 by an American couple in Belmont, Mass., and began looking for his biological mother in earnest in 1990.

The International Tracing Service archive in Bad Arolsen, Germany, provided a half-dozen documents offering tidbits about Factor and his mother, including a handwritten notation that she might have been headed to Palestine. That reference helped Factor direct his research to Israel and its refugee resettlement records.

The ITS archive, operated by the International Committee of the Red Cross, holds an estimated 30 million to 50 million pages of Nazi concentration camp documents. Since 1955, it has handled more than 11 million requests for information, but under the international agreement that governs the collection it rarely has allowed anyone but Red Cross staff to see the material.

In April, an agreement to unseal the long-closed archive won endorsement from Germany, giving the accord a majority among the 11 nations overseeing the documents. When the agreement is ratified by all 11 nations, survivors will be able to see their own files and researchers will be allowed to examine them.

The archive's historical importance became clear in recent months when The Associated Press obtained extensive access to the material, revealing previously unknown details about the Holocaust.

In early May, the Red Cross office in Cleveland gave Factor the message from Magen David Adom, which investigated his inquiry. The letter was relayed through the Holocaust and War Victims Tracing and Information Center of the American Red Cross in Baltimore, which has checked on more than 40,000 people missing since the Holocaust and World War II and found more than 1,200 alive.

Factor, a retired high school teacher, said he was holding out hope that his mother might change her mind and agree to meet, or at least exchange notes.

Speculating on a possible reason why his mother didn't want to meet him, he said: "Many survivors, they want to put the past behind and not have it brought back to them."

He also wonders if perhaps she was an unwed mother.

"It is very possible that this is a very, shall we say, embarrassing, traumatic chapter in her life," said Factor.

Johanna Gottesfeld, director of the Jerusalem branch of Amcha, a group that assists Holocaust survivors, was not familiar with the Factor case, but she said the mother's reluctance to speak could be related to some trauma she experienced.

"It's very threatening to open up emotionally to all the feelings it might bring up. It might bring out things that she might have a very difficult time dealing with afterward," she said.

A reunion could ignite bad memories, Gottesfeld said. "It might bring back all sorts of things that in order to continue to live, and not to become too depressed, to build a life she had to put aside," she said.

Factor has a friend in Israel making inquiries about his mother but said there were limits to his pursuit.

"You don't show up on the doorstep pounding," he said. "There's no way I would do that. That's an invasion. Would I like to send her a letter? If she would be willing to receive a letter from me, sure, I'd like to do that."