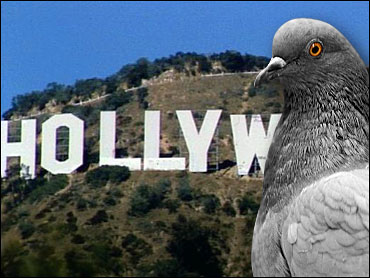 Hollywood residents believe they've found a humane way to reduce their pigeon population and the messes the birds make: the pill.

Over the next few months a birth control product called OvoControl P, which interferes with egg development, will be placed in bird food in new rooftop feeders.

"We think we've got a good solution to a bad situation," said Laura Dodson, president of the Argyle Civic Association, the group leading the effort to try the new contraceptive. "The poop problem has become unmanageable and this could be the answer."

Community leaders planned to announce the OvoControl P pilot program, which Dodson believes is the first of its kind in the nation, at a news conference Monday.

Dodson said representatives from People for the Ethical Treatment of Animals contacted her group with the idea to use OvoControl P. Other animal rights groups, including the Humane Society of the United States, support the contraceptive over electric shock gates, spiked rooftops, poisons or other methods.

It's estimated about 5,000 pigeons call the area home. Their population boom is blamed in part on people feeding the birds, including a woman known as the Bird Lady, who was responsible for dumping 25-pound bags of seed in 29 spots around Hollywood.

OvoControl P has been registered with the state Department of Pesticide Regulation and the U.S. Environmental Protection Agency. Developed by Rancho Santa Fe-based Innolytics, the substance contains nicarbazin, which interferes with an egg's ability to develop or hatch, said Erick Wolf, Innolytics chief executive.

The pilot program was expected to show results within a year, and the Hollywood area's pigeon population is expected to shrink by at least half by 2012, Dodson said.