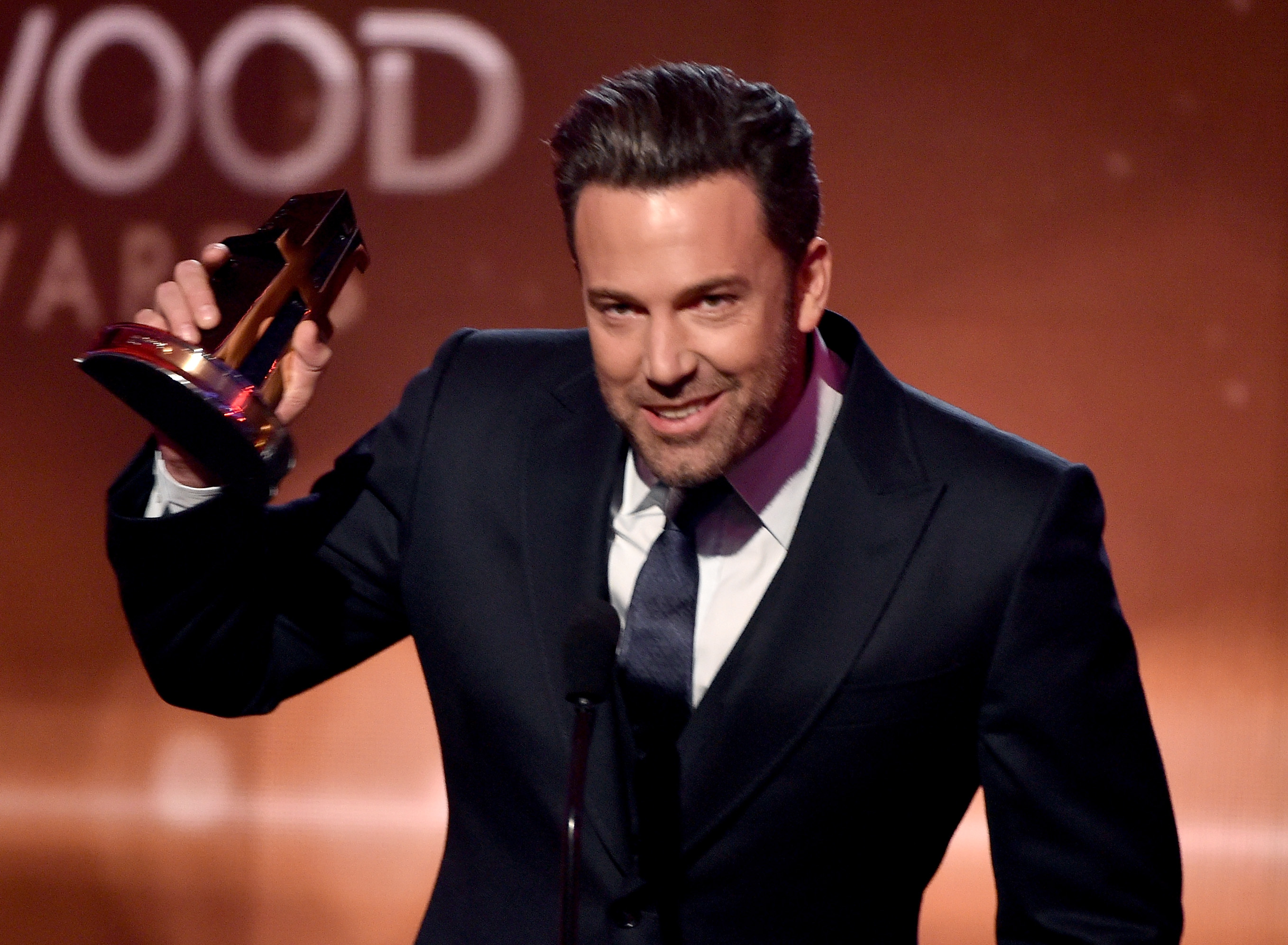 Awards season got off to a glamorous start Friday night with the Hollywood Film Awards, which debuted for the first time on television -- on CBS.

"Gone Girl" won the evening's top prize and Ben Affleck was on hand to accept on behalf of the cast, director and producers. He made quite a few jokes, notably about the much-talked-about shower scene in the movie, based on Gillian Flynn's bestselling novel.

"If you're gonna have one chance for America to see your junk, you want it to be cold," Affleck quipped.

"Guardians of the Galaxy" and "Foxcatcher" nabbed a couple of big honors, too, winning for best blockbuster and ensemble, respectively.

"I know what all of you at home are thinking -- did I miss the first 17...?" host Queen Latifah joked at the start of the ceremony before making a few jokes about people's "firsts."

She gave a little history about the awards ceremony and then told viewers and the audience, "It's a party, so drink up unless you already started -- in which case, keep going!"

The "party" started with Robert Downey Jr., who took the stage to announce the first award of the evening: supporting actor. The honor went to Robert Duvall for his role in the drama, "The Judge." He spoke about how his parents "pushed" him into acting before saying, "Thanks for having me tonight. This is a really great night."

Julianne Moore took home the actress honor for "Still Alice," in which she plays a cognitive psychologist diagnosed with early onset Alzheimer's disease. Benedict Cumberbatch received the actor award for his role in "The Imitation Game." In the buzzed-about film, he plays British mathematician Alan Turing, who cracked the German Enigma code during World War II and was later prosecuted for homosexuality.

Michael Keaton, star of "Birdman," took home the night's career achievement honor. "Grateful, thankful...humbled...Thank you very very much," he said. "This means an awful lot to me...Normally when they give this type of award to someone, it's because that person is usually dead and I'm not -- and I'm going to keep on going for a long time."

Rising stars had a special place in the show, too.

Shailene Woodley scored breakout actress honor for "The Fault in Our Stars." "To do this film really, truly felt like such an honor in my life," she said.

Angelina Jolie was on hand to present the new Hollywood prize to Jack O'Connell, the star of "Unbroken." He thanked Jolie (who directed the film), bowed and called her "my esteemed boss and good friend -- her ladyship."

The awards kept coming throughout the night with breakout actor going to newcomer Eddie Redmayne for his portrayal of Stephen Hawking in "The Theory of Everything."

"I'm only here because I was given the privilege of playing this extraordinary man," he said, noting how far he's come since sleeping on the floors of friends' homes and playing ping pong during his early days in Los Angeles.

The best supporting actress trophy went to Keira Knightley for "The Imitation Game." "I can't tell you how much it means especially in a year of wonderful performances," she said, thanking the movie's writers and her fellow actors, including the "excellent" Benedict Cumberbatch.

"'Foxcatcher' is the best movie in years," said Jonah Hill while presenting the film's cast, including Steve Carell and Channing Tatum, with the best ensemble honor.

"Mark Ruffalo couldn't be here tonight because he's not a good member of the ensemble," Carell joked about his castmate.

Singer Janelle Monae had double duty Friday night -- she took the stage to perform "What is Love?" from "Rio 2" and accepted the evening's songwriting honor.

There were some laugh-out-loud moments during the night, too. Chris Rock, for one, had a few funny lines while accepting the comedy film honor.

"I want to thank Les Moonves for having the only awards show without Pharrell. Thank God I don't have to listen to 'Happy' right now because I'd stab myself," he joked.

Jennifer Lopez didn't intend to be funny, but she managed to get some laughs during her onstage introduction for animation award. Instead of saying "How to Train Your Dragon 2," J-Lo flubbed the movie title and said, "How to Drain Your Dragon." Not surprisingly, the blunder cracked her up and set off a series of giggles.

Lopez wasn't the only star who had trouble reading the teleprompter. Johnny Depp also stumbled over some words while introducing the documentary prize. To his credit, Depp admitted from the start he's not good at these types of things.

This marked the 18th annual event, but the first time it's been broadcast live on television. Carlos de Abreu, who describes himself as an author, producer, screenwriter, brand marketing expert and Internet pioneer, launched the awards show in 1997. It's traditionally been an industry insider gala that lasted roughly four hours and featured a sit-down dinner. The founder has since teamed up with CBS and Dick Clark Productions to stage the show, condensing it into a two-hour TV format.

"I'm excited to bring the Hollywood Film Awards to the world...We'll let everyone in on Hollywood's best-kept secret," Queen Latifah said on the red carpet before the show.

The Hollywood Film Awards -- which recognize "excellence in the art of cinema and filmmaking" -- differ from other popular film galas as there are no nominee announcements -- just categories. Winners of the event are chosen by a revolving committee of 12 entertainment industry insiders, headed by de Abreu. Some of the Hollywood Film Awards honorees go on to get nods at the Academy Awards and Golden Globes.

Tell us: What did you think about the first televised Hollywood Film Awards?