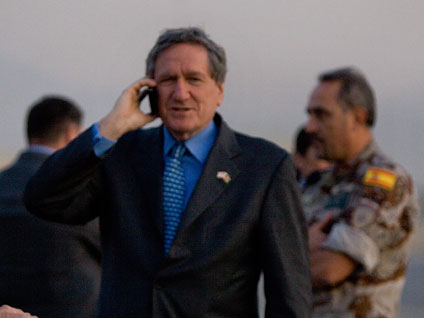 In his final words before emergency heart surgery, Richard Holbrooke, the influential U.S. diplomat who died on Monday following complications from the surgery, apparently urged an end to America's nine-year old Afghanistan conflict.

"You've got to stop this war in Afghanistan," Holbrooke apparently told  doctors before entering into surgery, according to family members' accounts originally reported by  Washington Post.

Later reports note that Holbrooke made the comments during "painful banter" leading up to his surgery -- and that they were not necessarily "a serious exhortation about policy."

State Department spokesman P.J. Crowley told reporters on Tuesday that the remarks were part of a lengthy back-and-forth between Holbrooke and his doctors, who were trying to calm him down before the surgery.

"At one point the medical team said: You've got to relax. And Richard said: I can't relax; I've got -- I'm worried about Afghanistan and Pakistan," Crowley relayed, according to ABC News. "And then after some additional exchanges, you know, the medical team finally -- finally said: Tell you what; we'll try to fix this challenge while you're undergoing surgery. And he said: Yeah, see if you can take care of that, including ending the war."

"Number one, he always wanted to make sure he got the last word," Crowley said, of Holbrooke. "And secondly, [the exchange] just showed how he was singularly focused on pursuing an advancing the -- you know, the process and the policies in Afghanistan and Pakistan to bring them to a successful conclusion," he said.

Holbrooke, a 69-year-old foreign policy veteran who worked in Vietnam as a foreign service member during the war and advised four Democratic presidents, had been serving until his death as special envoy to Afghanistan and Pakistan in the Obama administration. Though Holbrooke is believed to have seen the war in Afghanistan as winnable, he allegedly struggled in his dealings with the Afghan government - particularly when it came to the country's widespread corruption and lack of functional public services.

In a statement, President Obama called Holbrooke, who was nominated for a Nobel Peace Prize seven times (including for his work brokering the war-ending Dayton peace accords in former Yugoslavia), a "true giant of American foreign policy who has made America stronger, safer, and more respected." The president also praised Holbrooke's work in Afghanistan and Pakistan.

"The progress that we have made in Afghanistan and Pakistan is due in no small measure to Richard's relentless focus on America's national interest, and pursuit of peace and security," Mr. Obama's statement read. "He understood, in his life and his work, that our interests encompassed the values that we hold so dear."

Secretary of State Hillary Clinton also lauded his work for the administration, and emphasized that while he was a "fierce negotiator," she considered him "a fiercer friend and a beloved mentor."

"When I came to the State Department, I was delighted to be able to bring Richard in and give him one of the most difficult challenges that any diplomat can face," Clinton said on Monday in remarks at a holiday reception for the chiefs of diplomatic missions to the United States. "He immediately put together an absolutely world class staff. It represents what we believe should be the organizational model for the future - people not only from throughout our own government, but even representatives from other governments all working together."

"Tonight America has lost one of its fiercest champions and most dedicated public servants," Clinton added in a separate statement.

As special envoy for Pakistan and Afghanistan, Holbrooke advised the White House on strategies for brokering peace as well as how to revamp civilian assistance efforts there through diplomatic negotiations, development, and reconstruction initiatives.

Though Holbrooke and Afghan President Hamid Karzai were known to have a contentious relationship, the Post reports that Karzai released a statement saying Holbrooke "served greatly the government and the people of the United States."

Senator John Kerry, a Vietnam veteran, also offered his condolences on Monday, calling the end of his career "almost a bittersweet bookend that a career of public diplomacy that began trying to save a war gone wrong, now ends with a valiant effort to keep another war from going wrong."

"Our public careers were intertwined in so many ways, from Vietnam to my presidential campaign to the conflict in Afghanistan, and every step of the way he provided wise advice and intelligent guidance to presidents and statespeople alike," Kerry said, in a Monday night statement. "He died giving everything he had to one last difficult mission for the country he loved," Kerry said.

The White House plans to release a strategic review of the war in Afghanistan this month, and it is not expected to call for a change in strategy. Though Mr. Obama set July 2011 as the date to begin brining troops home when he announced a troop "surge" one year ago, the administration is now pointing to 2014 as its target date for a significant drawdown of U.S. forces.

Watch the CBS' "Early Show" coverage of Holbrooke's death below.


Lucy Madison is a political reporter for CBSNews.com. You can read more of her posts here. Follow Hotsheet on Facebook and Twitter.
View CBS News In