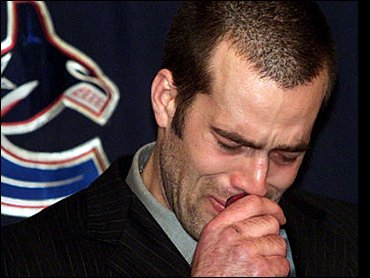 The National Hockey League on Thursday suspended for the rest of the season the player who attacked an opponent from behind, slamming him to the ice and breaking his neck.

In addition to his suspension, Vancouver Canucks forward Todd Bertuzzi's eligibility for next season will be determined by NHL commissioner Gary Bettman before the start of training camp.

Bertuzzi slugged Moore in the side of the head late in Monday night's 9-2 victory by the Avalanche. He hit Moore from behind and drove his head into the ice. Moore landed face-first — with the 245-pound Bertuzzi on top of him — and lay in a pool of blood for several minutes before he was removed on a stretcher.

Moore is out for the season with a broken neck. He also sustained a concussion and deep cuts on his face and remained hospitalized in Vancouver.

"We want to make clear that this type of conduct will not be tolerated in the NHL," league vice president Colin Campbell said in a statement.

Bertuzzi sat out Wednesday's tie with Minnesota and will miss the final 12 games of the regular season, forfeiting at least $500,000. The suspension will amount to a minimum of 17 games if the Canucks make the playoffs and are swept in a first-round series.

Vancouver is currently fourth in the Western Conference standings. Bertuzzi is second on the roster for points.

On Wednesday, Bertuzzi delivered an emotional apology to Moore. He spoke from Vancouver after he had an hour-long disciplinary hearing at the NHL office in Toronto. An All Star last season and this season, he already had been suspended indefinitely.

"I had no intention of hurting you," Bertuzzi said Wednesday night, reading a statement before the Canucks played the Minnesota Wild at Vancouver.

"I feel awful for what transpired," he said, choking up.

Bertuzzi met briefly with teammates before addressing reporters. He didn't take questions from the assembled media, and choked up three times during his three-minute address.

"To the game of hockey and the fans of Vancouver, for the kids that watch this game, I am truly story," Bertuzzi said. "I don't play the game that way. I'm not a mean-spirited person and I'm sorry for what happened."

"To Steve's family, I'm sorry you had to go through this and I'm sorry again for what happened out there," Bertuzzi said. "I'm relieved to hear that Steve is going to have a full recovery, it means a lot to me to know that's going to happen."

When Moore's condition improves, he'll be transferred to Craig Hospital in Denver and evaluated by neurosurgeons, the Avalanche said.

"Steve knows he has the support of the entire Avalanche family and hockey fans throughout the world," said Pierre Lacroix, Avalanche president and general manager.

The punch appeared to be retaliation for an open-ice hit Moore delivered to Canucks captain Markus Naslund last month, knocking him out for three games.

"It's very difficult to see a friend going through what he's going through," Naslund said of Bertuzzi after the Canucks tied the Wild 1-1. "The best service we can do for him is to play good hockey and battle for him.

The hit on Moore was violent even by hockey's rough-and-tumble standards, Kevin DuPont, a hockey columnist for the Boston Globe, told the CBS News Early Show.

"This transgressed or went far beyond what is the normal reaction or the normal kind of play of violence, if you will. It just went that one step beyond," he said, adding later, "To come out and follow him around and then be that cowardly about it, from the side, from behind, and then keep it up once the player is down, goes beyond."

DuPont said Bertuzzi's claims that he did not intend to harm Moore failed to ring true, because he had followed Moore around the ice for several seconds.

B.C. Solicitor General Rich Coleman and Vancouver police are investigating the punch, the second time in four years police have looked into an on-ice hit at an NHL game in the city.

In 2000, former Boston Bruin Marty McSorley was charged for hitting then-Vancouver Canuck Donald Brashear with his stick. McSorley was convicted of assault with a weapon, but he received an 18-month conditional discharge, meaning no jail time and no criminal record after probation.

The league suspended him for a year, ending his 17-year NHL career.

Despite the two bloody incidents, DuPont defended the hockey league.

"I think the sport does a good job of policing itself. I think there are some instances you have to put the blame on the specific individual and not indict the sport," he told the Early Show.