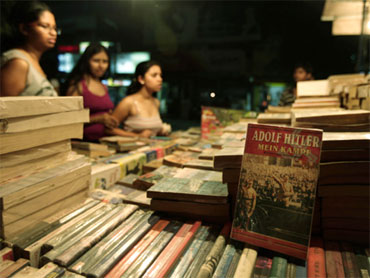 When word spread this month that Bollywood planned a movie called "Dear Friend Hitler," screenwriter Nalin Singh was genuinely shocked it stirred even a small controversy.

The media expressed disdain, Jewish groups were horrified and his lead actor - though a bit baffled by the reaction - quit.

While such a response would seem, if anything, understated in much of the world, Singh had reason to believe his film would not generate even a ripple of scandal in India.

Here, Hitler is not viewed as the personification of evil, but with an attitude of morally ambiguous fascination. He is seen as a management guru - akin to Machiavelli or Sun Tzu - by business students, and an object of wonder by people craving order amid the chaos of India.

"Indians still have a curiosity about Hitler. The Western audience has seen a lot of films on Hitler, but there was no Hindi film on him," says Singh, explaining the choice of subject for his first film, which he hopes will be made by the end of the year.

Without a major role in World War II, India does not have the intense feelings toward the Nazis that many other nations have. In Bollywood movies, characters routinely call each other "Hitler" as a minor insult, referring to a nagging wife or annoying boss.

But Indians also have a strange fascination with the Nazi dictator, whose brutal dictatorship and slaughter of 6 million Jews has made his name synonymous with the devil in the West.

A few years ago a restaurant named Hitler's Cross opened in the suburbs of Mumbai complete with posters of the dictator and swastikas for decor. Protests from Jewish groups forced the owners to change the name to The Cross Cafe.

A home furnishings company was forced to withdraw a line of bedspreads called NAZI amid similar complaints.

The book, free of copyright in India, is printed by over half a dozen publishers. It is even a staple amid the small stack of top-selling books hawked by young boys at traffic lights in India's cities.

The book once helped inspire India's far right Hindu politicians, who often expressed open admiration for Hitler, but it is now appealing to a new generation of less political readers.

"It's a constant seller and sells one, two copies a day," he says, adding that part of the draw for its young readership seems to lie in the fact that Hitler "defied the whole world and challenged the whole world."

Sociologist Ashish Nandy says a confluence of reasons explains why Indians are drawn to both the man and the book.

For some readers, modern India is a country in chaos and, there is a "certain admiration" for Hitler and his extreme authoritarianism.

There is also India's colonial inheritance when "every enemy of Britain was a friend of India and at least potentially a good person," he says, adding that among today's young readers "there is kind a vague sense that it's about a person who gave a tough time to the Brits."

Tarun Singhal, a management student at New Delhi's prestigious Indian Institute of Technology, who first read the book as a young undergraduate, says for him the book is uplifting.

"(It) serves as a reminder that nothing is unachievable," he said, adding that he is able to separate that message from the book's pervasive anti-Semitic ideology.

India's interest in Hitler, mirrors Nazi Germany's in India as the home of the purportedly pure Aryan race - which formed the basis of the Nazis' notions of racial supremacy. The Nazis also co-opted the ancient Hindu symbol of the swastika for the Nazi Party flag and arm bands.

When news about the Indian film on Hitler came out earlier this month, it might have been a step too far.

The title is a reference to two letters written by Indian independence leader Mohandas Gandhi to Hitler.

The first written in 1939 asked the Nazi leader to help prevent a "war which may reduce humanity to the savage state."

India's tiny Jewish community condemned the film as insensitive and the lead actor Anupam Kher dropped out saying he didn't want to upset anyone.

"It's very hurtful," says Jonathan Solomon of the India Jewish Federation, of the film's title. "The Jews in India were not the victims of anti-Semitism or the Holocaust, but we feel for our brother Jews and this is very hurtful to Jews all over the world."

But Singh is determined to see his script - which he says juxtaposes the personality of the German dictator against India's Gandhi - on celluloid and has the support of the film's producers. If he's able to persuade Kher to return to the project or find a replacement, the film should be ready by the end of the year, he says.

"It's misleading to say our film is glorifying Hitler," he says, adding that he just wants to make an "authentic" film for the Hindi film audiences.