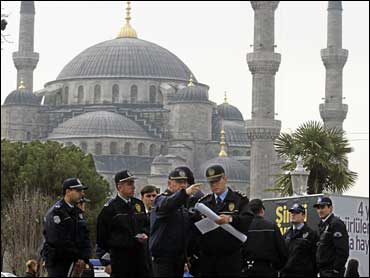 During his first visit to a Muslim country, Turkey, Pope Benedict XVI urged leaders of all religions to "utterly refuse" to support any form of violence in the name of faith. You can read more about Turkish history below.

When was Turkey founded?

Modern Turkey was founded in 1923 from the Anatolian remnants of the defeated Ottoman Empire by national hero Mustafa Kemal, who was later honored with the title Ataturk, or "Father of the Turks."

Under his authoritarian leadership, the country adopted wide-ranging social, legal, and political reforms. After a period of one-party rule, an experiment with multi-party politics led to the 1950 election victory of the opposition Democratic Party and the peaceful transfer of power.

What is Turkey's political history?

Democracy has been fractured by periods of instability and intermittent military coups (1960, 1971, 1980), which in each case eventually resulted in a return of political power to civilians. In 1997, the military again helped engineer the ouster - popularly dubbed a "post-modern coup" - of the then Islamic-oriented government. Turkey intervened militarily on Cyprus in 1974 to prevent a Greek takeover of the island and has since acted as patron state to the "Turkish Republic of Northern Cyprus," which only Turkey recognizes.

A separatist insurgency begun in 1984 by the Kurdistan Workers' Party (PKK) -now known as the People's Congress of Kurdistan or Kongra-Gel (KGK) - has dominated the Turkish military's attention and claimed more than 30,000 lives, but after the capture of the group's leader in 1999, the insurgents largely withdrew from Turkey, mainly to northern Iraq. In 2004, KGK announced an end to its ceasefire and attacks attributed to the KGK increased.

When did Turkey join the UN?

Turkey joined the UN in 1945 and in 1952 it became a member of NATO. In 1964, Turkey became an associate member of the European Community; over the past decade, it has undertaken many reforms to strengthen its democracy and economy, enabling it to begin accession membership talks with the European Union.

What is Turkey's economy?

Turkey's dynamic economy is a complex mix of modern industry and commerce along with a traditional agriculture sector that in 2004 still accounted for more than 35 percent of employment. It has a strong and rapidly growing private sector, yet the state still plays a major role in basic industry, banking, transport, and communication.

What is Turkey's largest industry?

The largest industrial sector is textiles and clothing, which accounts for one-third of industrial employment; it faces stiff competition in international markets with the end of the global quota system. However, other sectors, notably the automotive and electronics industries, are rising in importance within Turkey's export mix.

To learn more about Turkey:

• Click here for a photo essay of the Pope's trip to Turkey.