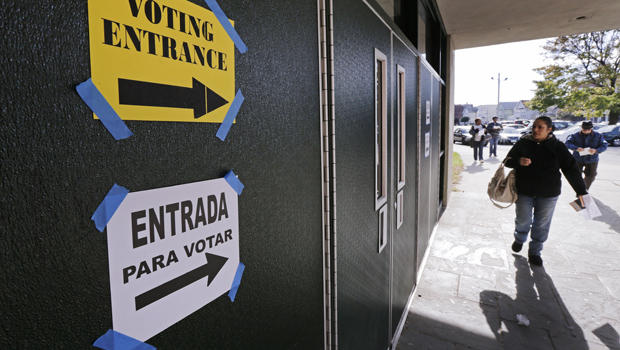 Who will win the election three weeks from now? The outcome could depend on how members of one very large constituency respond to the urgent call ... VOTA!  To report our Cover Story, we’ve turned to one of the anchors of the nation’s largest Spanish-language television network: Maria Elena Salinas of Univision:

Wherever you look, Latinos and their culture have become a vibrant, inseparable strand of America’s DNA.

That’s one way of looking at it.

The turmoil over immigration, specifically undocumented Mexican immigration, has become one of the hottest hot-button issues of the 2016 Presidential campaign -- leaving America’s largest minority questioning once again where, or if, they really fit in.

When asked how closely American history is tied to Latino history, Frances Negrón-Muntaner, a professor and Director of the Latino Archive at New York’s Columbia University, replied, “I think extremely close. In fact, I don’t think you can think of the United States without Latino history at all.”

Whether you call them Latinos or Hispanics (the terms are generally considered interchangeable), their role in American history, she says, has been misunderstood and under-valued from the start.

But as America grew, many did cross the “new” border -- though more often than not they were invited. Mexicans started coming into the United States at the end of the 19th and early 20th centuries, recruited to work in mining and agriculture as those industries expanded in the Southwest.

“And then, you have World War I and World War II, in which the United States makes a concerted effort to recruit Mexican labor to fill in the gaps left by men going to war,” Negrón-Muntaner said.

“Today, we have about 57 million people in the United States who are of Hispanic origin,” said Mark Hugo Lopez, Director of Hispanic Research at the Pew Research Center in Washington, D.C. “I think that the impact of the Latino community, particularly on many aspects of American life, is only just beginning.”

During the past 50 years, the Hispanic population in America has more than quadrupled, from just 4 percent in 1965, to 18 percent today, with California, Texas, Florida, New York and Illinois leading the way.

“You get about two-thirds of the Hispanic population in just those few states,” Lopez said. “However, the story of Latino population growth has really been one of dispersion as well. And we’ve seen growth particularly in the South. Right now, Georgia is actually the 10th largest Hispanic state overall.”

All of which means that come Election Day, America’s 27 million eligible Hispanic voters will be a force to be reckoned with.

Miami-based pollster and radio talk show host Fernand Amandi, who focuses on Hispanic voters, says four key states where the Hispanic vote could decide the presidential election are Arizona, Colorado, Florida and Nevada. “It’s interesting because Arizona is a new one on this list,” Armandi said.

Salinas asked, “How bad are things between Donald Trump and the Hispanic voters?”

“It’s about as bad as it gets,” Armandi replied. “We asked in our polls if Hispanic voters thought he was a racist. A racist. Not whether he has said racist things, but if he was racist. Over 70 percent of Hispanic voters [on a national level] feel that he is a racist.”

But winning the Presidency means winning at the state level and collecting electoral votes, which once again puts Florida -- where 25 percent of the population Is Hispanic -- in the driver’s seat.

But once again, as we’ve seen in the last four elections, the one state that could be the tipping point in 2016 is Florida, where 25% of the population is Hispanic.

“Right now Hillary Clinton does have a massive lead over Donald Trump with Hispanic voters,” Armandi said. “Barack Obama got 60 percent of [the Hispanic vote] four years ago, and it helped him win the state by less than a percentage point. She’s going to need every single one of those points, and right now she’s on track to equal or do better than President Obama did in 2012.

“As Florida Hispanic voters go, so goes the keys to the White House.”

But historically, Hispanics turn out in low numbers. Only 48 percent of those eligible voted in 2012.

Which is where Ben Monterroso comes in…

“People are more engaged today, are more knowledgeable today,” he said. “And I do hope and expect that they all go out and participate and vote. But I’m not going to sit here and wait for that to happen.”

Monterroso is Executive Director of Mi Familia Vota (My Family Votes), a Hispanic voter registration group.  More than 400 staff and volunteers are knocking on doors in Arizona and other key states to get people to sign up.

And this year, Monterroso says, is different:

“You took it personally,” Salinas said.

Trump’s stand on immigration has clearly hurt him with some Hispanics, but not all.

“We can’t just throw out immigration laws and say, ‘We don’t need these. Anybody who wants to come can come.’ That’s just not how it’s going to work,” said Steve Montenegro, a Republican state representative from Arizona who believes immigration laws need to be strictly enforced.

And as for Trump’s claim that many Mexican immigrants are rapists and criminals? Montenegro said, “I’m not going to assume that I know what’s in every candidate’s mind. But what I know is that immigrants are honorable people”

But, true or not, Trump’s allegations, says Ben Monterroso of Mi Familia Vota, tarnish ALL Latinos (with a few notable exceptions).

“People criticize the immigrant community in a bunch,” said Monterroso. “But once they get to know somebody, and if it’s the nanny who take care of the baby, ‘Oh no. She is good. She’s a good immigrant!’

“If it is the gardner who takes care of your garden, ‘Oh, no, no, not that one!’ The one that cleans your house? ‘Oh, no. That one is okay.’ The one that serves you food in the restaurant? ‘Oh, that one is good as well.’ So we’re all ‘good.’”

And many Americans agree. In a CBS Poll conducted for our report, 51 percent of Americans believe the overall influence of Hispanics on U.S. society has been “mostly good.” Only 13 percent said “mostly bad.”

You might say one who has been a very good influence is singer-songwriter Gloria Estefan,” who reflected, “Unless you are a native American, your family is from somewhere else, whether it’s five generations back or one generation back.

“The strength of this country is that amazing quilt of so many different colors and ideologies and religions and political leanings. That’s what makes this country great.”

In the 1960s, Gloria and Emilio Estefan fled Castro’s Cuba for the United States. Yes, they became superstars, but their journey is typical of millions of immigrants who come here seeking a better life.

“We worked hard,” she told Salinas. “I would go to school from 8-12 with the full load, I would go from 1-9 at night six days a week to work at the airport, two nights a week from 9:30 to 11:30 at night I would work at teaching community school guitar. And then I’d join the band.”

Their life is the subject of the hit Broadway show, “On Your Feet.”  It’s a tale, Estefan believes, that isn’t so much an immigrant story as an American story -- one that’s taken on new urgency as we head to the voting booth.

“We hope that it lessens fear of immigrants that gets dredged up and nurtured every time that there’s a political campaign and they want to find someone to blame -- it’s always usually the last one in,” she replied. “We hope that what it shows them is how connected everybody in the world is regardless of where you come from. How we all have the same aspirations and dreams. So that we see the things that make us the same and not so different.”