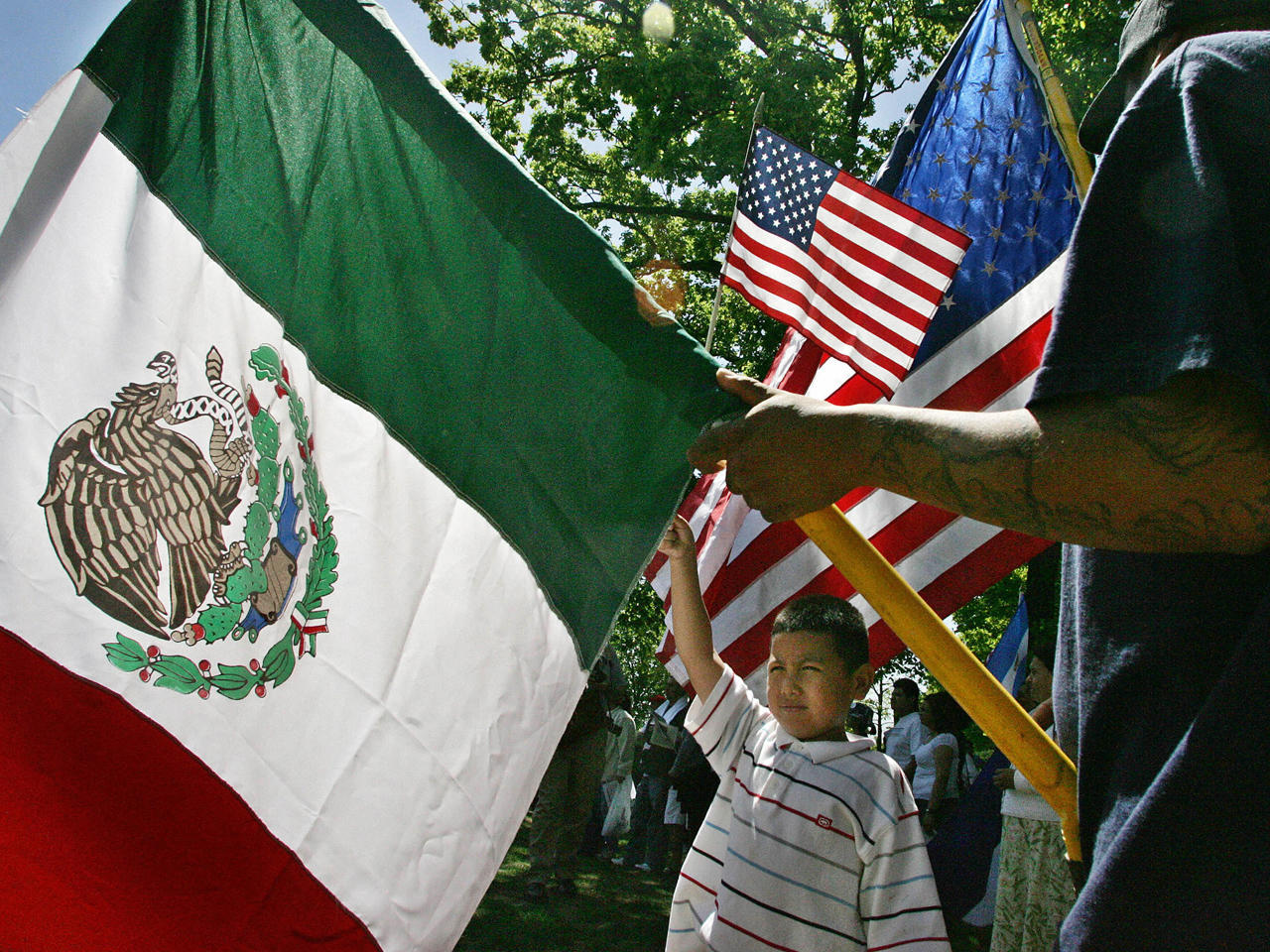 According to a new CBS News poll, the outlook of Hispanic Americans on their lives, their family’s future, and their opportunities in the U.S., is markedly optimistic.

And in what has been a bitterly-divisive election season, a majority of the American public thinks Hispanics have a positive influence on American culture -- both on society overall (51%) and on the country’s food (78%) and arts and entertainment (57%).

Like Americans overall, Hispanics think immigrants make the U.S. a better place (57%), and most support a path to citizenship for those who came here illegally (especially as children).

But unlike Americans overall, Hispanics place more importance on dealing with illegal immigrants in the U.S. over border security. Seventy-six percent of Hispanics, and 61% of the public overall, oppose building a wall on the U.S.-Mexico border.

On the presidential candidates, 79% of Hispanics (compared to 56% of non-Hispanics) think Republican nominee Donald Trump is too harsh in his approach to illegal immigration, while most think Democratic nominee Hillary Clinton’s approach is about right.

Hispanics expect to see a Hispanic U.S. President in their lifetime, but for now they would like to see both parties -- but especially the Republican Party -- do more for Hispanics.

Hispanic Influence in the U.S.

Perhaps taking some pride in their heritage, Hispanics themselves are especially likely to say the impact of Hispanics on the U.S. has been good – 63 percent do.

Influence of Hispanics on U.S. Society:

Americans are inclined to say the influence of Hispanics on specific areas of society has also been more good than bad. Majorities see a positive impact in the cultural areas of the arts and entertainment and food, while about half say Hispanic influence on the economy and on moral and social values has been positive. Few think Hispanic influence in any of these areas has been bad.

Influence of Hispanics on ….

Hispanics themselves are even more likely to say the influence of Hispanics in each of these areas has been positive.

Influence of Hispanics Has Been Good on ….

Hispanics: Optimistic About Opportunity and the Future

Compared to Your Parents, Your Opportunities to Succeed Are…

Hispanics who were born outside the United States and Puerto Rico are more optimistic than those who are U.S. citizens about their opportunities to succeed as well as their family’s future.

Compared to Your Parents, Your Opportunities to Succeed Are …

Hispanics vs. Others on Getting Ahead in America:

Hispanics, along with Americans overall, believe in what many call the American Dream.  Seventy-three percent of Hispanics think it is still possible to start out poor in this country and become rich.

Possible to Start Poor and Become Rich in U.S.:

When it comes to personal finances, Hispanics describe their household similar to non-Hispanics and Americans overall. Fifty-two percent say their household income is just enough to pay their bills, while 30% have enough income to save and buy some extras.

Hispanics’ optimism about the future extends to politics as well. More than six in 10 Hispanics say they expect that the U.S. will have a Hispanic President in their lifetime.

Hispanic President in Your Lifetime?

But despite these rosy views of their family’s opportunities in the U.S., Hispanics acknowledge that the country is experiencing difficult times. When evaluating the country’s direction, most Hispanics -- like Americans overall -- say things in the U.S. are currently off on the wrong track, although they are less likely to say that than the broader American public.

The Parties: Should They Do More for Hispanics?

Half of Hispanics in this poll were born in another country, and nearly six in 10 Hispanics think that immigrants coming to the United States improve American society in the long run. Most Americans (53%) agree.

In the Long Run, Immigrants Make the U.S. …

Illegal Immigrants Coming to the U.S. …

Illegal Immigrants Living in the U.S. Should …

Americans are even more forgiving of illegal immigrants who came or were brought to the U.S. as children.  Nine in 10 Americans, including 95% of Hispanics and 89% of non-Hispanics, support a path to citizenship for those who came to the U.S. illegally as children if certain requirements are met.

Path to Citizenship for Illegal Immigrants Who Came to U.S. as Children?

Which Should be a Higher Priority?

Despite this, majorities of Hispanics and non-Hispanics alike disagree with one proposed solution to border security: building a wall along the U.S.-Mexican border.  Sixty-one percent of Americans overall oppose this idea, including 76% of Hispanics and 58% of Non-Hispanics.

Building a Wall Along the U.S.-Mexican Border:

Americans and Hispanics alike express clear -- and differing -- views on the two major party presidential candidates’ approach to illegal immigration.  Fifty-nine percent of Americans overall and 79% of Hispanics think that Donald Trump is too harsh in his approach to illegal immigration, while few say that about Hillary Clinton. Americans overall and Hispanics especially are more likely to think that Clinton’s approach is about right.

When They Talk About Illegal Immigration …

Most Hispanics agree with Americans overall that same-sex marriage should be legal, but they do so by a smaller margin.  Sixty-two percent of Americans now think same-sex marriage should be legal in the United States, the highest percentage yet recorded in the CBS News Poll.  In contrast, this percentage drops to 55% (still a majority) of Hispanics.

Same-Sex Marriage Should Be …

Hispanics under age 30 are more likely than those who are older to say abortion should be generally available, and to say same-sex marriage should be legal.

Views of the 2010 Affordable Care Act:

And by a wide margin, Hispanics (78%) are also more likely to approve of affirmative action programs that help minorities get ahead than are Americans overall (59%).  In this, they approve in a far greater percentage than white Americans (50%), but they are less supportive than blacks (91%).

Programs That Help Minorities Get Ahead:

Fifty-two percent of Hispanics in the poll are Catholic, and views of their Church’s leader, Pope Francis, are more positive than negative.  While just over half of Hispanics are undecided or haven’t yet formed an opinion of the Pope, 35% have a favorable view of him, and just 9% are unfavorable.

This poll was conducted by telephone October 6-11, 2016  among 1,331 adults nationwide. Data collection was conducted on behalf of CBS News by SSRS of Media, Pa.  Phone numbers were dialed from samples of both standard land-line and cell phones.

Additional interviews were conducted with Hispanics, to yield a sample size of 404.  The Hispanic oversample consisted of callbacks to Hispanic respondents who had previously completed a survey as part of a random sample, and interviews with respondents whose telephone numbers were likely to fall in high-incidence Hispanic areas on landline exchanges and cell phone rate centers.

The weighting of the Hispanic sample consisted of non-response corrections for the callback numbers (to account for systematic differences between those completing and those not completing the callback interview), and a weighting adjustment to ensure that Hispanics in high-incidence areas were not over-represented in the data.

The Hispanic and non-Hispanic samples were weighted separately to match their group’s population characteristics such as gender, age, education, region, marital status and phone use based on recent U.S. Census estimates. The samples were then combined in proportion to their size in the population., and weighted to standard parameters of the total U.S. adult population.

The error due to sampling for results based on the entire sample could be plus or minus three percentage points. The error for subgroups may be higher. The margin of error for the sample of Hispanics is 6 points and 4 points for Non-Hispanics. Interviews were conducted in English and Spanish.  This poll release conforms to the Standards of Disclosure of the National Council on Public Polls.